The Fate of Glyphosate and AMPA in a Freshwater Endorheic Basin: An Ecotoxicological Risk Assessment
Next Article in Special Issue

A Pilot Study in Cameroon to Understand Safe Uses of Pesticides in Agriculture, Risk Factors for Farmers’ Exposure and Management of Accidental Cases

Toxicants, such as herbicides, have been hypothesized to affect sperm parameters. The most common method of exposure to herbicides is through spraying or diet. The aim of the present study was to investigate the effect of direct exposure of sperm to 1 mg/L of the herbicide Roundup on sperm motility and mitochondrial integrity. Sperm samples from 66 healthy men who were seeking semen analysis were investigated after written informed consent was taken. Semen analysis was performed according to the World Health Organization guidelines (WHO, 2010). Mitochondrial integrity was assessed through mitochondrial staining using a mitochondria-specific dye, which is exclusively incorporated into functionally active mitochondria. A quantity of 1 mg/L of Roundup was found to exert a deleterious effect on sperm’s progressive motility, after 1 h of incubation (mean difference between treated and control samples = 11.2%) in comparison with the effect after three hours of incubation (mean difference = 6.33%, p < 0.05), while the relative incorporation of the mitochondrial dye in mitochondria of the mid-piece region of Roundup-treated spermatozoa was significantly reduced compared to relative controls at the first hour of incubation, indicating mitochondrial dysfunction by Roundup. Our results indicate that the direct exposure of semen samples to the active constituent of the herbicide Roundup at the relatively low concentration of 1 mg/L has adverse effects on sperm motility, and this may be related to the observed reduction in mitochondrial staining.
Keywords: herbicides; Roundup; glyphosate; sperm motility; mitochondria herbicides; Roundup; glyphosate; sperm motility; mitochondria

Among the variety of toxicants that affect male fertility, fungicides, insecticides, and herbicides seem to be environmental factors that may have a negative impact on human sperm quality [1,2]. Many of these chemicals are endocrine disruptors; their bioaccumulation in humans may cause adverse health effects, especially for people living in regions in which outdoor spraying has been performed to protect crops from competing weeds. Concerning the herbicide Roundup (a branded herbicide produced by Monsanto), there are no data relative to the effect of the in vitro exposure of male reproductive fluids (semen plasma) to this herbicide, although in the last decade of research studies have focused on reproductive toxicity caused by Roundup. The active ingredient of Roundup is glyphosate ([N-(phosphonomethyl)-glycine], which acts as an inhibitor of the enzyme 5-enolpyruvylshikimate-3-phosphate synthase by interrupting the synthesis of essential aromatic amino acids in plants [3]. The extensive use of glyphosate, given that it poses a risk to reproductive health, is a controversial matter. There were no adverse effects of glyphosate on mammalian reproduction and prenatal development [4], while another study described the negative impact of glyphosate on frog and chicken development [5]. Although the effect of the herbicide Roundup on human male reproduction is not known, a meta-analysis revealed that exposure to glyphosate decreased sperm concentration in both mice and rats, indicating adverse effects on reproductive health [6]. Moreover, studies on zebrafish demonstrated the harmful effect of glyphosate on sperm motility, mitochondrial functionality, and sperm DNA integrity [7]. In a previous study it was demonstrated that glyphosate at a concentration of 5 mg/kg exerted deleterious effects on sperm quality in Wistar rats [8], while recently it was reported that sperm parameters such as motility and concentration represented the most sensitive parameters affected by glyphosate in live-bearing Jenynsia multidentata [9].
Since more research on Roundup exposure is needed, we undertook the present study aiming to investigate for the first time the possible impact of direct in vitro exposure of human sperm cells to the herbicide Roundup as regards specific sperm characteristics, focusing on sperm motility. The effect of the herbicide on mitochondrial integrity was also assessed. Thus, taking into account the observed correlation between sperm motility and mitochondrial functionality [10], we attempted to investigate whether the herbicide Roundup could affect sperm motility and whether this action is associated with mitochondrial dysfunction.

Sixty-six (66) healthy men seeking semen analysis volunteered for the study during 2015 and gave written informed consent, while Institutional Review Board approval of the study was also obtained. All men were living in Thessaly in Greece, which is an agricultural region. Sixty percent of the participants (40/66) were doing an office job, 22.7% (15/66) were temporarily unemployed, and 17.3% (11/66) were salesmen. Only 15% (10/66) were married, while 20% (2/10) of the married men had one child (boy).

Sixty-six fresh semen samples were collected after 48 h to 96 h of abstinence and were allowed to liquefy at 37 °C for 15 min to 20 min. Semen analysis of each specimen was performed in terms of semen volume and sperm concentration determination in combination with the percentage of progressive motile (PRM), non-progressive motile (NPM) and immotile (IM) spermatozoa, according to WHO 2010 guidelines. Portions of 0.5 mL of the total volume of each specimen were centrifuged at 2000 rpm for 5 min and the supernatant from each sample was carefully discarded, while the pellet was resuspended in 1 mL of pre-warmed buffer solution (Gamete Buffer, William Cook Australia PTY LTD®, Brisbane, Australia) containing Roundup at a final concentration of 1 mg/L (corresponding to a glyphosate concentration of 0.36 mg/L). Although the effect of the herbicide is profound in high concentrations, we investigated in a time-dependent manner the impact of the minimum concentration, which has the maximum effect as a model of toxicity in male gametes. The selected dose of the 0.36 mg/L glyphosate through the 1 mg/L Roundup was lower than the mean blood glyphosate concentration found in mild–moderate cases of human Roundup intoxication; in the latter cases, it has been found to be approximately 61 mg/L [11], while Roundup is used in agricultural work at dilutions ranging from 10 g/L to 20 g/L. Before the selected concentration used in the present study, we preliminary exposed spermatozoa of five normal semen samples with two other concentrations of 1/10 and 10 times higher. The first concentration did not show any impact on the spermatozoa, while in the second we observed total immotility. An aliquot of each initial fresh semen sample was kept aside for subsequent sperm analysis and served as a control (C). After 1 and 3 h incubation, in the presence or absence of Roundup, at room temperature, sperm analyses were performed in both control and Roundup-treated semen samples. Both control and Roundup-treated samples were subjected to the same experimental procedure. All samples for the purpose of the experiment were normalized to 106 sperm cells in order to avoid any bias relative to the specific concentration of Roundup to different sperm concentration.

More than 300 spermatozoa of both control and Roundup-treated samples were examined. Approximately one-tenth by volume of the Roundup-treated and the un-treated (control) samples were centrifuged at 2000 rpm for 5 min. The supernatant from each sample was carefully discarded and the pellet was re-suspended in pre-warmed Dulbecco’s Modified Eagle Medium (Life technologies corporation, Grand island, NY, USA), supplemented with 200 nM of Mitotracker Red CMXROS (CMX) mitochondrial dye. CMX is a commercial red-fluorescence dye purchased from Invitrogen (Life technologies corporation, Grand island, NY, USA) that stains mitochondria in live cells, and its accumulation is dependent upon membrane potential. Thus, CMX is incorporated mainly in functionally active mitochondria of live cells [12,13,14,15,16]. Ten to 20 μL of the CMX-treated cells were allowed to settle down in areas marked by a hydrophobic barrier pen, on polylysine coated glass slides, for 1 h at 37 °C in a humidified atmosphere. Subsequently, attached cells were washed with Phosphate Buffer Saline (PBS), fixed in Methanol (−20 °C) for 10 min [17], washed three to four times with PBS, and mounted in a polyvinyl alcohol-based anti-fading medium [18]. Specimens were observed with a Leica DM2000 (Leica, Heerbrugg, Switzerland) fluorescence microscope equipped with a 100 × 1.65 oil objective lens. Images were taken with the Optimos (Qimaging, Surrey, BC, Canada) camera (Bodossaki Foundation donation). Quantitative analysis of the incorporated CMX dye in mitochondria of the sperm midpiece was performed with the use of ImageJ v1.47 program (NIH, Bethesda, MD, USA).

Demographic data, sperm characteristics (volume, concentration and motility) were normally distributed (one sample Kolmogorov–Smirnov test) and statistical analysis was performed both by the paired t-test and the non-parametric Wilcoxon–Mann–Whitney test. The level of 0.05 was used to determine statistical significance. Numeric values were expressed as mean ± SD. The statistical software package used was SPSS v.17.

Exposure of sperm samples to Roundup reduced the mitochondrial incorporation of the CMX dye. In Figure 2, a representative image of mitochondrial staining of human spermatozoa exposed to Roundup is shown. Evaluation of the relative fluorescence intensity per unit area (RFU) of mitochondria in the mid-piece region of spermatozoa revealed a statistically significant reduction in the CMX incorporation in the Roundup-treated samples (0.66 ± 0.49) compared to controls (1.21 ± 0.95) (p < 0.05) (non-parametric Wilcoxon–Mann–Whitney test).

This work was supported in part by the Bodossaki Foundation and funded in part by the Postgraduate Programs ‘‘Biotechnology—Quality assessment in Nutrition and the Environment”, ‘‘Application of Molecular Biology—Molecular Genetics-Molecular Markers”, Department of Biochemistry and Biotechnology, University of Thessaly. We also thank Konstantina Katsanaki and Eleni Lagodonti for their contribution to the small experimental study concerning the DNA fragmentation. We also thank Sotiria Pappa for collecting some of the data.

Apart from the corresponding authors, all the other authors have been listed alphabetically because they equally contributed. 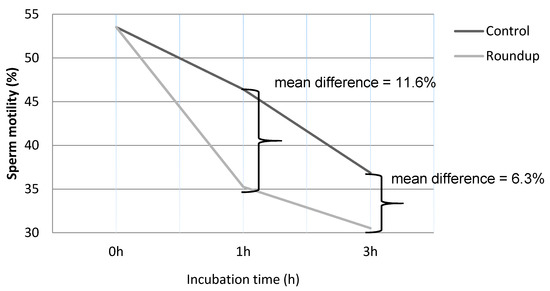