Self-Reported Symptoms and Pesticide Use among Farm Workers in Arusha, Northern Tanzania: A Cross Sectional Study

A Pilot Study in Cameroon to Understand Safe Uses of Pesticides in Agriculture, Risk Factors for Farmers’ Exposure and Management of Accidental Cases

Chemical pesticides are widely used in Cameroon for agricultural production. In 2015, more than 600 pesticide products were approved for use in various foodstuffs. Much misuse of these chemicals by farmers has been documented in rural and urban settings. This pilot study aims to contribute to the improvement of the health of the population and the environmental preservation by identifying pesticide-poisoning cases, the most incriminated products and critical risk factors of exposure. Questionnaires were administered to pesticide vendors, farmers and health personnel, and observations made on farmers’ practices at their work places. From July to September 2016, 24 villages from five sites, representing the most important agricultural production areas of the five agro-ecological zones of Cameroon, were visited. In total, 519 people were interviewed: 412 farmers, 69 pesticide vendors and 38 health personnel. A total of 180 pesticide formulations out of 610 registered in 2015 were said to be used by farmers. In the 38 health centers visited, 56 cases of pesticide poisonings and intoxications were reported between 2011 and 2016. Paraquat-, glyphosate-, cypermethrin- and metalaxyl-formulated pesticides were the most incriminated. In total, 78% of poisoning cases were accidental, 12% suicide attempts, 4% criminal. Entry of pesticide products from neighboring countries needs to be better regulated, and the quality of pesticides sold on the market should be monitored periodically. Empty pesticide containers should be recuperated from smallholder farmers. Authorities should set up a harmonized pesticide-poisoning management procedure, and create a toxico-vigilance system for surveillance cases and preventive actions. View Full-Text
Keywords: pesticides; approval; intoxication; poisoning; surveillance pesticides; approval; intoxication; poisoning; surveillance
►▼ Show Figures 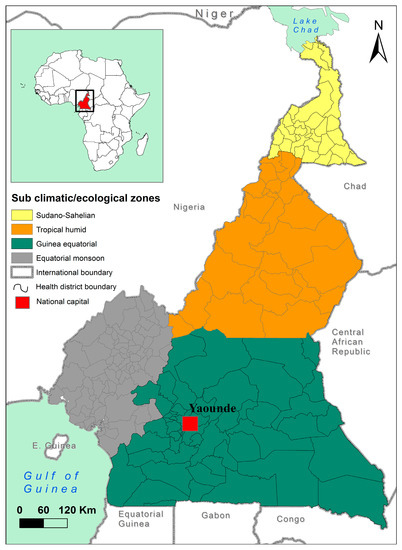