Persistent Threats by Persistent Pollutants: Chemical Nature, Concerns and Future Policy Regarding PCBs—What Are We Heading For?
Previous Article in Journal

The concentrations of polychlorinated dibenzo-p-concentrations dioxins (PCDDs), polychlorinated dibenzofurans (PCDFs) (PCDD/Fs), and polychlorinated biphenyls (PCBs) were determined in fruit and vegetables collected in farms located in the well-known “Land of Fires” area of Southern Italy, in an effort to learn more about the environmental pollution of this high-risk area due to illegal waste dumping and uncontrolled burning near cultivated fields. Concentrations were in the range 0.011–2.26 ng g−1 for the six “indicator” non-dioxin-like PCBs (NDL-PCBs), and 0.0009–0.096 pg WHO toxic equivalent (TEQ) g−1 for the sum of dioxin-like PCBs (DL-PCBs) and PCDD/Fs. Lacking maximum limits for these contaminants in fruit and vegetables, the concentration values found were compared with the action levels set out in the EU Recommendations. These levels were never exceeded in the examined samples. In the present study, the highest mean value for PCDD/Fs + DL-PCB corresponded to apricots, olives, and nuts, while the lowest values were observed in endive and green beans. The results showed also that NDL-PCB levels in apricots were much higher than in any other food, suggesting that they can accumulate PCBs: this fruit might be proposed as a “sentinel” of the presence of these contaminants in the environment.
Keywords: dioxin; vegetables; Campania; Land of Fires; polychlorinated biphenyls dioxin; vegetables; Campania; Land of Fires; polychlorinated biphenyls

Polychlorobiphenyls (PCBs), polychlorinated dibenzo-p-dioxins (PCDDs), and dibenzofurans (PCDFs) are organic chemical substances arisen from various anthropic activities, such as combustion processes and industrial manufacturing, with a strong toxicity due to their acute and chronic health effects on immune, nervous, endocrine, and reproductive systems, and their potential carcinogenic effects [1,2,3].
Since they show great resistance to chemical degradation and high lipophilicity that cause their accumulation in the food chain, there has been much attention paid to the presence of these organic pollutants in the diet. It was recently estimated that the average dietary exposure to dioxins and dioxin-like compounds in the Italian general population is close to the tolerable daily intake (TDI) of 2 pg WHO toxic equivalent (TEQ) kg−1 body weight [4], established by the Scientific Committee on Food (SCF) of the European Commission [5], and in a large part of the European population, PCBs intake is higher than recommended [6].
Human exposure to dioxins predominantly occurs via food intake [7]. The main contribution to the total intake originates from the consumption of animal fat [8]. Nevertheless, fruit and vegetables were estimated to contribute 13% of the total dietary intake, although the uncertainty was large [9]. They are important components of a healthy and balanced diet and represent a source of vitamins, minerals, and fibers and of a certain amount of energy (mainly in the form of sugar). Therefore, their consumption is constantly growing.
Knowledge of diet intake of certain persistent pollutants such as dioxins and PCBs therefore represents an important factor in ensuring the population’s health [10]. At the same time, vegetable products represent an important matrix for environmental quality bio-monitoring in high-risk areas such as those where waste incinerators and illegal burning of waste materials are active [11,12].
In the present study, a first detailed investigation relating to the concentrations of dioxins and PCB in fruits and vegetables from the Campania Region of Italy was performed. In the past decade, the interest in these substances has increased in the Campania Region after its lands were involved in illegal waste dumping phenomena and uncontrolled burning of wheels, plastics, textiles, and other industrial residuals along the roads bordering cultivated fields. The attention was paid in particular to that area between Napoli and Caserta sadly known as “Land of Fires,” which has been used for the illegal dumping, burning, and disposal of toxic waste and that houses a municipal waste incinerator.
This area is of interest due to past environmental pollution events that were discovered by finding high levels of dioxin in foods that were above permitted values [13,14,15].
To this aim, different fruits and vegetables were collected from the cultivated lands within the “Land of Fires” area between 2014 and 2016 in the proper seasonal period and analyzed for 17 polychlorinated dibenzo-p-dioxins and dibenzofurans (PCDD/Fs), 12 congeners of dioxin-like polychlorobiphenyls (DL-PCBs), and 6 non-dioxin-like polychlorobiphenyls (NDL-PCBs).
While there is sufficient data available on the levels of PCDDs, PCDFs, and PCBs in foods of animal origin, there is much less on their levels in fruit and vegetables [4,16], and this makes it difficult to estimate the exposure of the population.
Mainly due to low levels of dioxins in vegetables, the determination of the average content in samples resulted in an estimate with substantial uncertainty. Therefore, the present study was conducted based on composite samples for all relevant types of fruit and vegetables.

2.1. Selection of Vegetables and Sampling Area

Based on the typical plantation of the Campania region lands, 16 fruits and 26 vegetables were selected (Table 1): below-ground growing vegetables (onion, garlic, fennel, potato, and turnip), above-ground growing vegetables and fruits (cauliflower/kohlrabi, zucchini, artichoke, broccoli, turnip tops, and strawberries), leafy vegetables at ground level (lettuce, cabbage, chicory, endive, and radish) and vegetables and fruits growing far above ground level (green bean, pea, broad bean, wheat, corn, pepper, tomato, aubergine, chili pepper, apple, grain, apple, apricot, cherry, plum, peach, pear, clementine, mandarin, lemon, orange, kaki, grape, walnut, and hazelnut).
Samples were collected in their specific growing period between 2014 and 2016 from orchards or vegetable plantations located in different parts of the “Land of Fires,” in the Campania Region, mainly where there are some potential sources of contamination, such as an incinerator or waste burning. In particular, this area is located between the Domizio-Phlegrean Coast, the Agro Aversano-Atellano lands, the districts of Acerra and Nola, the lands around Vesuvius, and the city of Naples, affecting a total of 95 municipalities in the provinces of Benevento, Caserta, and Naples (Figure 1).
As established by the sampling procedures [17], a hypothetical “X” on the agricultural identified area was drawn and along the lines and individual samples, of at least 1 kg, per hectare were collected depending on the size of the ground. The individual samples formed the composite sample, whence the laboratory sample was prepared.
Samples were collected by qualified staff wearing vinyl gloves, put into zip bags, and immediately sent to the laboratory. Before analysis, adherent matter such as soil, foul parts, and non-edible leaves and stems were removed manually and samples were washed. From each kind of fruit or vegetable, individual samples were combined to make a pooled sample. Other samples and the remainder of the individual samples were stored at −20 °C and available for further investigations.

The sample extraction and clean-up were carried out as previously reported [18]. The fraction containing DL-PCBs and NDL-PCBs was collected after elution from the alumina column, while the fraction containing PCDD/Fs was eluted from the carbon column. The two fractions were concentrated, first under vacuum and then under nitrogen, and the remainders were dissolved in the corresponding recovery standards solutions (13C12-labeled congeners).
The HRGC/HRMS measurements were carried out using a GC Trace Series 2000 coupled with an MAT 95 XP (Thermo Fisher, Bremen, Germany). The congeners of PCDD/Fs were separated by high resolution gas chromatography (HRGC) on a DB-5 MS capillary column (60 m × 0.25 mm, 0.10 µm film thickness, J & W Scientific, Folsom, CA, USA) and determined by high resolution mass spectrometry (HRMS). The congeners of DL-PCBs and NDL-PCBs were separated by HRGC on an HT-8 capillary column (60 m × 0.25 mm, 0.25 μm film thickness, SGE Analytical Science Pty, Ltd., Victoria, Australia) and determined by HRMS.

Samples were tested by a validated method routinely used for PCDD/Fs and PCBs analysis in food and feed and successfully tested in a number of inter-laboratory studies. The method used was an in-house adaptation of the US EPA Methods [18].
PCDD/Fs and DL-PCBs TEQ values were calculated using the World Health Organization Toxic Equivalency Factors (WHO-TEFs2005). The upperbound (UB) concentrations were calculated assuming that all values of the different congeners less than the limit of quantification were equal to the limit of quantification and were expressed in pg-TEQ/g fresh weight. The sum of six indicator congeners was calculated for NDL-PCBs as UB concentration, and expressed as ng/g.
A laboratory blank and a control sample were analyzed for each batch of 10 and 20 samples, respectively. Recovery rates of labeled congeners ranged from 60% to 90%, and the analytical uncertainty was in the order of ±20% for WHO-TEQs and the sum of six NDL-PCBs.
Results were also analyzed through a determination of Pearson correlation coefficients and principal component analysis (PCA) using the Minitab Statistical Software by Minitab Company.

Dioxins and PCBs in soil and in atmosphere may be the source of these pollutants in the vegetables growing in this environment. In this study, carried out in the cultivated field located in the so-called “Land of Fires” in the Campania Region of Southern Italy, the results showed a very low contamination level in vegetables.
The low levels of dioxins and PCBs found in plants demonstrate that these matrices poorly accumulate these types of pollutants and thus that the degree of environmental pollution by dioxins and PCBs in the Land of Fires is low, as demonstrated by recent results obtained in animal matrices [32,33]. The results, in turn, show, in the consumption of vegetables and fruits produced by the population in this area, a low dietary exposure of these contaminants. 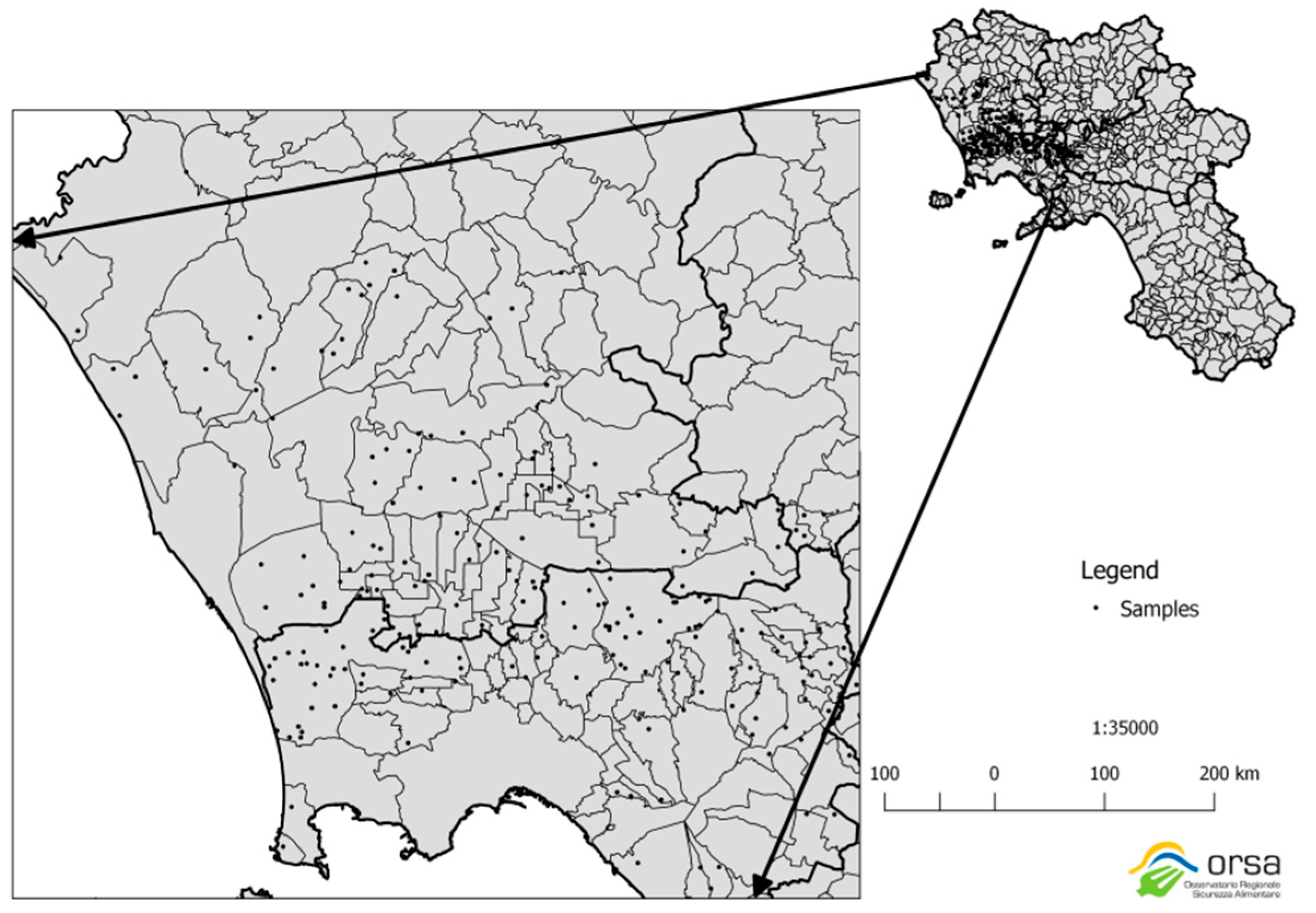 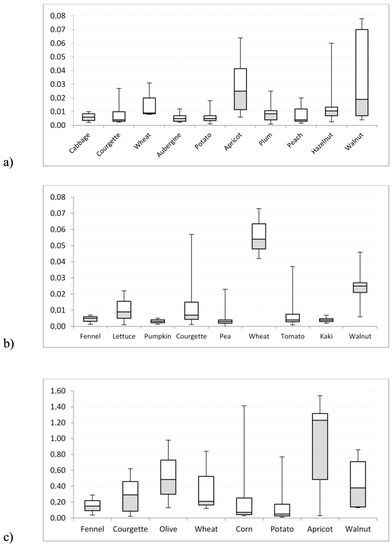 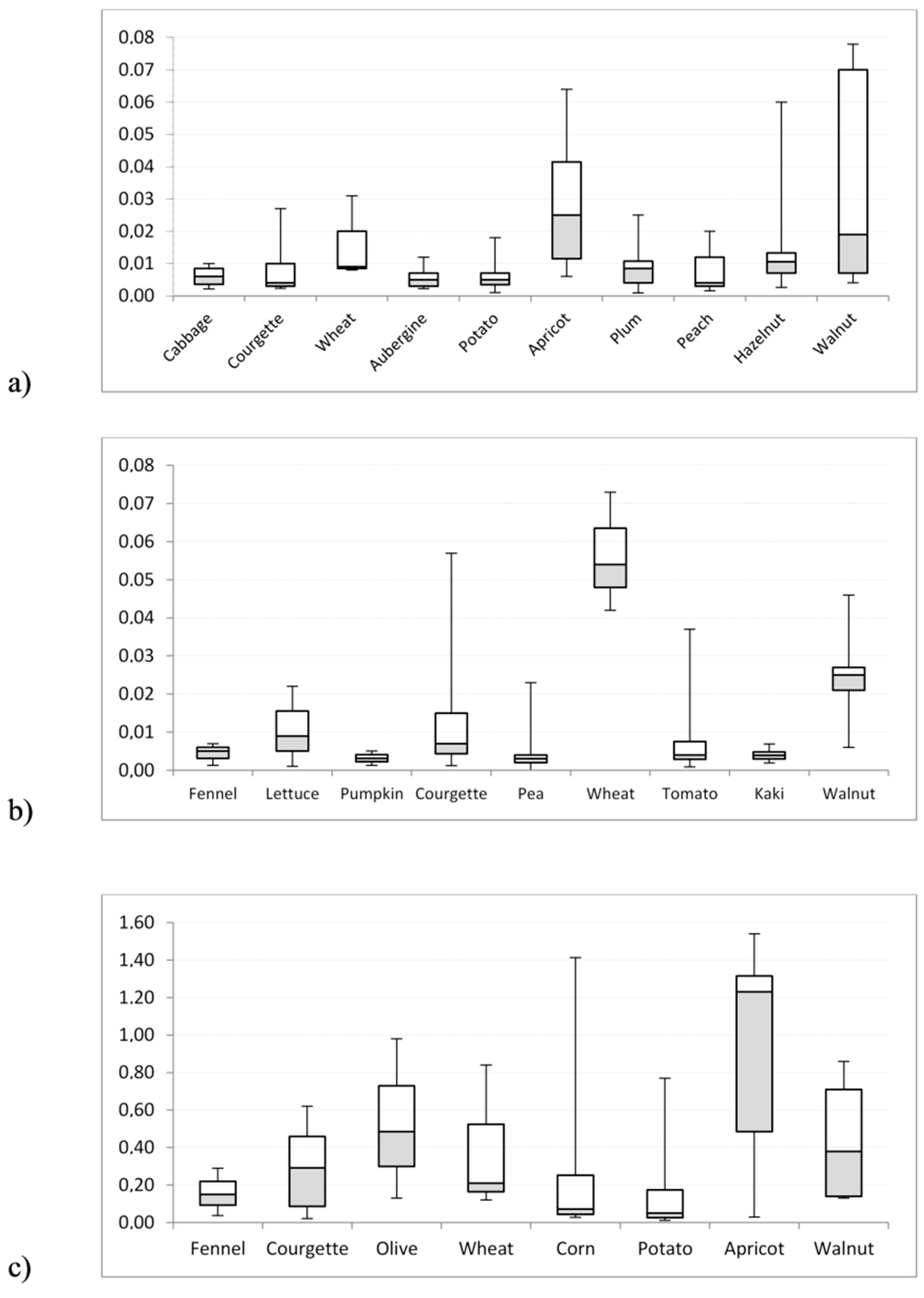 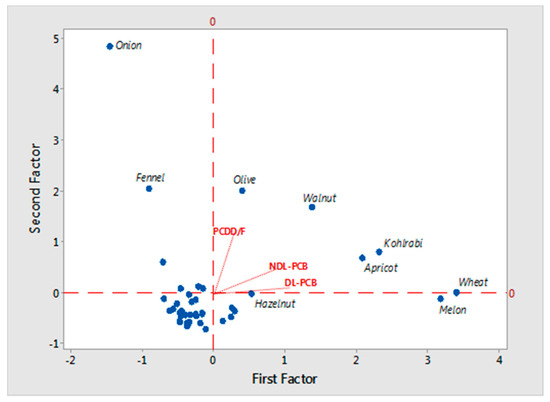 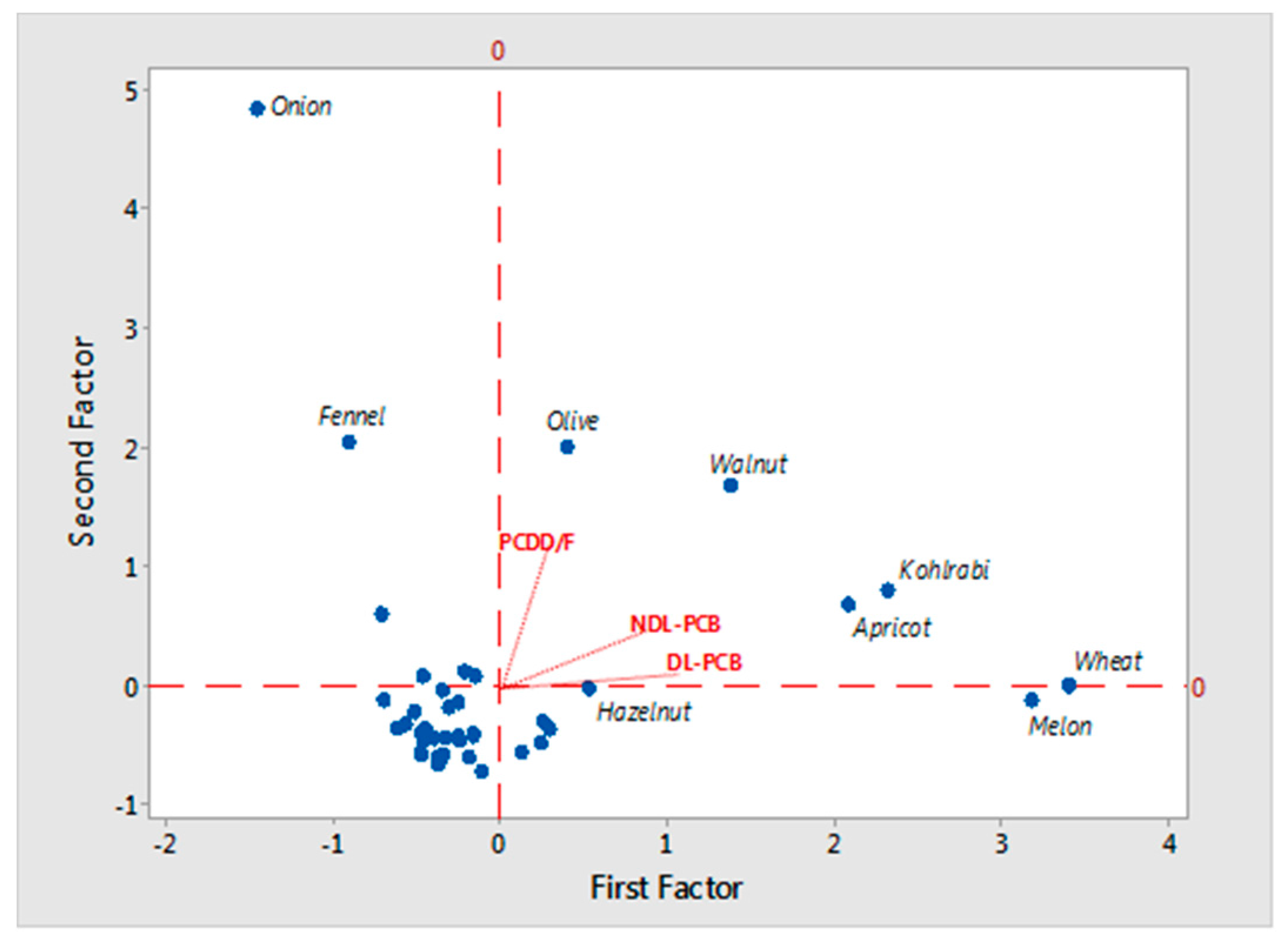