Aloe vera Flowers, a Byproduct with Great Potential and Wide Application, Depending on Maturity Stage
Next Article in Special Issue

Effects of Probiotic Supplementation on Dyslipidemia in Type 2 Diabetes Mellitus: A Meta-Analysis of Randomized Controlled Trials

Type 2 diabetes mellitus (T2DM) is a complex metabolic disorder characterized by islet beta cell failure and insulin resistance [1]. It is the most prevalent type of diabetes patients [2]. Based on previous studies, T2DM is considered as a multifactorial disease, with genetic predisposition, environmental factors and behavioral changes contributing to disease incidence [3,4]. T2DM can lead to a series of severe complications, which include cardiovascular disease, neuropathy and nephropathy [5], making it a serious threat to human health. Recently, it has been considered as a major global public health concern due to the increasing number of affected patients and the reducing age of disease onset [6].
Previously, some studies have shown that more than 50% of T2DM patients present with dyslipidemia [7,8]. Dyslipidemia is characterized by an increase in total cholesterol (TC), low-density lipoprotein cholesterol (LDL-C) and triglyceride (TG) concentrations, and a decrease in high-density lipoprotein cholesterol (HDL-C) concentrations, either occurring individually or in various combinations [9]. Some previous studies have confirmed the relationship between dyslipidemia and T2DM [10,11]. They have shown that dyslipidemia is highly prevalent (>75%) in T2DM patients [12], which manifested as the elevated plasma concentrations of LDL-C particles, and low concentrations of HDL-C in T2DM patients [13,14]. In another study, 108 adult T2DM patients were recruited by the Nnamdi Azikiwe University Teaching Hospital Nnewi to evaluate the potential pattern of dyslipidemia among T2DM patients [7]. The results showed that 24.1% of the patients had single dyslipidemia and 66.6% had combined dyslipidemia [7]. Therefore, the influence of dyslipidemia on the development and progression of T2DM should not be overlooked. Given the close relationship between T2DM and dyslipidemia, ongoing research has focused on searching for effective methods to relieve T2DM.
The results of clinical trials indicate that probiotics may have potential therapeutic effects on T2DM. It was found that probiotic consumption could be helpful in alleviating the dysregulation of blood lipids and blood pressure [15], and decreasing cholesterolemia [16]. After that, several meta-analyses have attempted to elucidate the effects of probiotics on T2DM. One study [17] found that probiotics intake could markedly increase HDL-C concentrations, but had no significant effects on LDL-C, TC or TG levels compared with the control groups. In contrast, another meta-analysis [18], which included 11 eligible RCTs, suggested that probiotic consumption remarkably decreased TC, TG and LDL-C concentrations in the T2DM groups, compared with the placebo groups. The variable results reported by these meta-analyses have led to controversy. These variable results may be attributable to the variabilities in eligibility criteria, study selection, number of studies included and targeted outcomes.
Thus, a meta-analysis with a larger sample size and more recent reports is necessary to clarify the potential effects of probiotic intake on dyslipidemia in T2DM patients. We aim to analyze all recent (up to February 2020) eligible RCTs and determine the clinical benefits of probiotic intake in T2DM patients, including changes in TC, TG, LDL-C and HDL-C concentrations. Subgroup analyses were performed to clarify the effects of numbers of probiotic species, body mass index (BMI), intervention type and supplementation duration on controlling dyslipidemia in T2DM patients. Notably, our meta-analysis differs from previous studies, particularly with respect to the major clinical endpoints and the participant characteristics. Our analysis included more RCTs (n = 15, 884 participants) than previous studies. Additionally, two recent clinical studies by Sabico et al. [19] and Razmpoosh et al. [20] that were not analyzed in previous meta-analyses were also included in our study.

This study was completed according to the guidelines of Cochrane [21] and PRISMA [22], respectively. The PubMed (up to October 2020), Scopus (up to October 2020) Web of Science (1950 to October 2020) and Cochrane Library (up to October 2020) databases were used for searching relevant RCTs. Besides this, the following terms were used to identify eligible studies: (Random* OR blind* OR allocate* OR assign* OR trial* OR crossover* OR cross-over) AND (T2DM* OR T2D* OR type 2 diabetes mellitus* OR type 2 diabetes) AND (probiotics* OR probiotic* OR Bifidobacterium* OR Lactobacillus* OR Streptococcus* OR Saccharomyces* OR Bacillus*).
This step was completed independently by two authors (Chen Wang and Chengcheng Zhang). The inclusion criteria for eligible RCTs were as follows: (1) The participants were T2DM patients; (2) the participants treated with probiotics formed the treatment group, and a placebo was used as the control treatment; (3) the RCT measured the outcomes for at least one of the set parameters (TC, TG, LDL-C and HDL-C concentrations); and (4) the RCT had a parallel or crossover design but did not include reviews, protocols, letters or case reports.

2.3. Assessment of Risk of Bias

The Cochrane risk-of-bias tool [23] was used to detect the risk of bias. The assessment was performed by two authors independently (Chen Wang and Jianxin Zhao), and a third author’s opinion (Wei Chen) was sought to resolve any disagreement.

Five steps were completed by two authors (Chen Wang and Qixiao Zhai) to synthesize and analyze the data. First, all of the data were included and analyzed using the Review Manager version 5.3 software (Cochrane Collaboration, Oxford, England). The Cochran’s Q-test [24] and reported I-square (I2) [25] were used for assessing the heterogeneity of the effect of probiotic intake. The I2 value of heterogeneity (I2) was classified as per previous studies [18,26]: <25% (represents low heterogeneity), 25–75% (represents moderate heterogeneity), and >75% (represents high heterogeneity). Standardized mean differences (SMDs) and their 95% confidence intervals (CIs) were used for calculating the pooled data. Two methods were used for assessing the possibility of high heterogeneity, as follows: (1) Subgroup analyses (including BMI, number of species, types of interventions and duration of probiotic); (2) sensitivity analysis (to investigate which studies caused the high heterogeneity and how studies contributed to the meta-analysis) [27]. The Begg’s and Egger’s tests (with p < 0.05 regarded as significant) and visual inspection of funnel plots [28] were used to detect possible publication bias in individual analyses. However, this study has never been registered in the international prospective register of systematic reviews (PROSPERO).

3.2. Risk of Bias in Individual Studies

As shown in Figure 2, selective reporting bias was present in seven studies [29,30,31,32,33,34,39], and one study did not mention the method of randomization [35]. Attrition bias can be found in nine RCTs due to the withdrawal of several participants during the study period [19,20,29,30,32,33,34,35,38]. Overall, six RCTs were defined as methodologically sound and of high quality [19,20,36,37,40,41]. The other nine trials were rated as being of fair quality for having unclear risk of bias, particularly with respect to selection bias, attrition bias and reporting bias. In total 12, RCTs were registered as clinical trials, whereas three studies were not registered anywhere [29,31,35] (Table 1). Besides this, the Systematic Reviews and Meta-Analyses (PRISMA) statement is shown in Supplementary Table S1.

HDL-C concentrations were reported in 15 studies, 4 of which contained two intervention groups [19,37,39,40] and 1 included four intervention groups [38]. These groups were divided and treated as separate RCTs, yielding 22 studies for the evaluation of HDL-C concentrations. The calculated SMDs showed that probiotic intervention significantly increased the HDL-C levels (SMD: 0.25, 95% CI: (0.01, 0.50)), but heterogeneity was high between the studies (n = 22; I2 = 78%; p = 0.05). A sensitivity analysis identified two studies [30,33] that contributed to the high heterogeneity. After excluding these RCTs, the heterogeneity reduced to 36%, but the increase in the HDL-C concentrations caused by probiotic consumption (SMD, 0.09, 95% CI: (−0.06, 0.24), p = 0.22) became nonsignificant compared with the placebo group (Figure 6).

As shown by the funnel plots in Figure 7, the effect sizes were symmetrically distributed around the pooled effect size for TC (Figure 7a) and TG (Figure 7b), but not for LDL-C (Figure 7c) and HDL-C (Figure 7d). Thus, we have performed the Egger’s regression intercept test for detecting the potential publication bias. The results showed that the p values of LDL-C and HDL-C are 0.345 and 0.711, respectively, suggesting there is no significant publication bias in the study.

In this meta-analysis, four studies reported adverse events, including minor gastrointestinal disturbances [37], gastrointestinal symptoms, infection, hypoglycemia, headache and musculoskeletal symptoms [39], flatulence [19] and abdominal discomfort [41], due to probiotics. One study reported no adverse effects of probiotic supplementation, but three participants in their study reported higher sexual desire after the study [20]. In two trials, the T2DM patient compliance to the probiotic treatments was good, and no serious adverse event was reported [32,33].

The following are available online at https://www.mdpi.com/2304-8158/9/11/1540/s1, Table S1: The Systematic Reviews and Meta-Analyses (PRISMA) statement of the present meta-analysis.

C.W., H.Z., Q.Z. and W.C. contributed to the conception and design of the meta-analysis; C.W., C.Z. and L.Y. selected the clinical trials for analysis; C.Z. and S.L. extracted the data items and performed data collection; C.W., F.T., J.Z. and W.C. performed the risk-of-bias assessment; and C.W. and Q.Z. performed the data synthesis and analysis. Manuscript revisions were completed by C.W., Q.Z. takes primary responsibility for communication with the journal and editorial office. All authors have read and agreed to the published version of the manuscript.

This work was supported by the National Natural Science Foundation of China Program (No. 31820103010 and No. 31871773); Projects of Innovation and Development Pillar Program for Key Industries in Southern Xinjiang of Xinjiang Production and Construction Corps (2018DB002); National Key Research and Development Project (No. 2018YFC1604206); National First-Class Discipline Program of Food Science and Technology (JUFSTR20180102); the BBSRC Newton Fund Joint Centre Award; and Collaborative Innovation Center of Food Safety and Quality Control in Jiangsu Province. 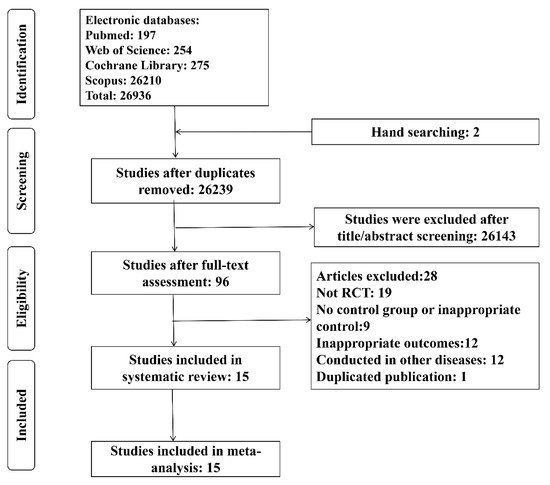 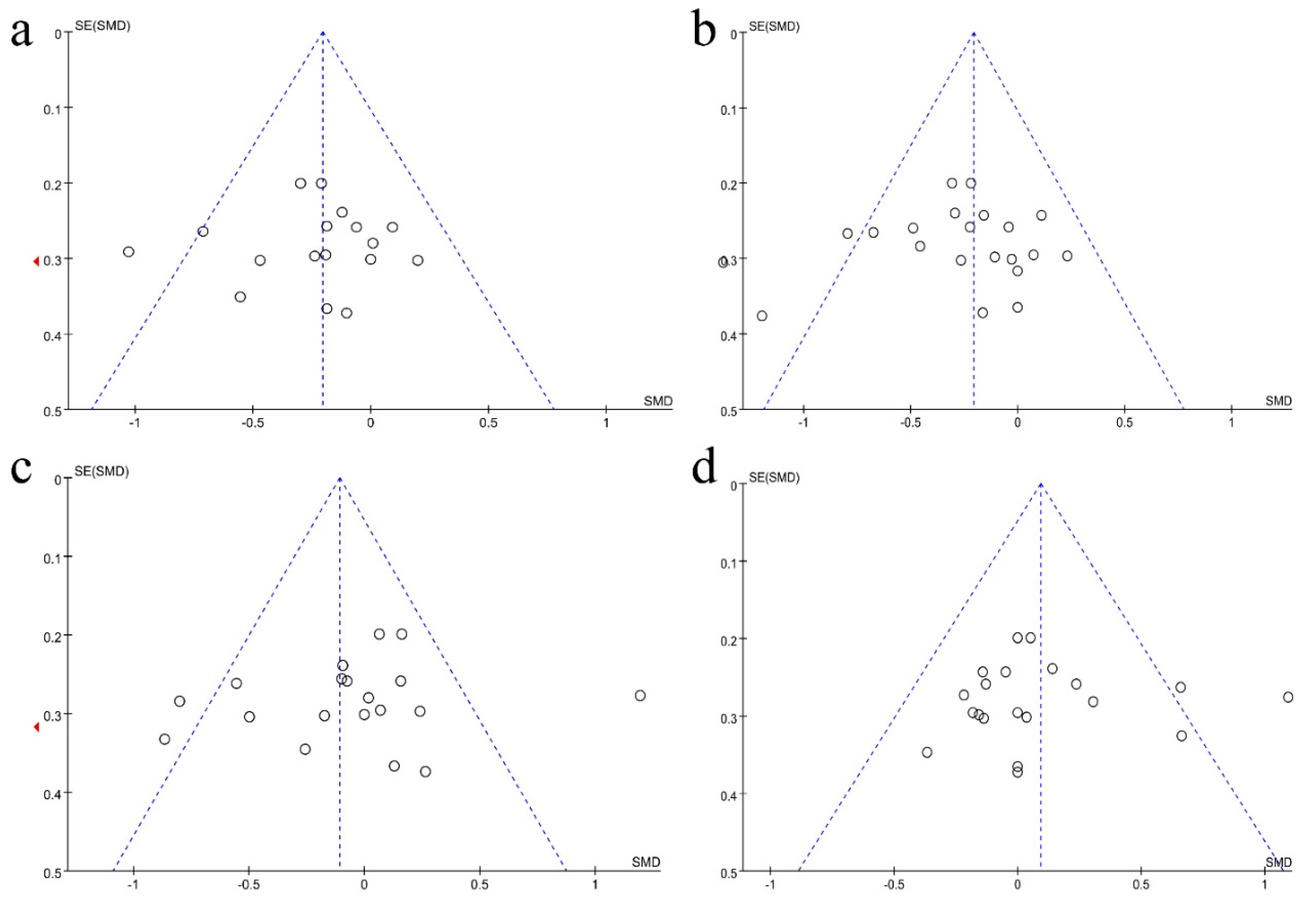