Detection of Bacterial Pathogens and Antibiotic Residues in Chicken Meat: A Review
Previous Article in Journal

Characterization of Andean Blueberry in Bioactive Compounds, Evaluation of Biological Properties, and In Vitro Bioaccessibility
Previous Article in Special Issue

Despite its benefits as biological insecticide, Bacillus thuringiensis bears enterotoxins, which can be responsible for a diarrhoeal type of food poisoning. Thus, all 24 isolates from foodstuffs, animals, soil and commercially used biopesticides tested in this study showed the genetic prerequisites necessary to provoke the disease. Moreover, though highly strain-specific, various isolates were able to germinate and also to actively move, which are further requirements for the onset of the disease. Most importantly, all isolates could grow under simulated intestinal conditions and produce significant amounts of enterotoxins. Cytotoxicity assays classified 14 isolates as highly, eight as medium and only two as low toxic. Additionally, growth inhibition by essential oils (EOs) was investigated as preventive measure against putatively enteropathogenic B. thuringiensis. Cinnamon Chinese cassia showed the highest antimicrobial activity, followed by citral, oregano and winter savory. In all tests, high strain-specific variations appeared and must be taken into account when evaluating the hazardous potential of B. thuringiensis and using EOs as antimicrobials. Altogether, the present study shows a non-negligible pathogenic potential of B. thuringiensis, independently from the origin of isolation. Generally, biopesticide strains were indistinguishable from other isolates. Thus, the use of these pesticides might indeed increase the risk for consumers’ health. Until complete information about the safety of the applied strains and formulations is available, consumers or manufacturers might benefit from the antimicrobial activity of EOs to reduce the level of contamination. View Full-Text
Keywords: Bacillus thuringiensis; Bacillus cereus; food infections; enterotoxins; cytotoxicity; essential oils; risk evaluation; biopesticide Bacillus thuringiensis; Bacillus cereus; food infections; enterotoxins; cytotoxicity; essential oils; risk evaluation; biopesticide
►▼ Show Figures 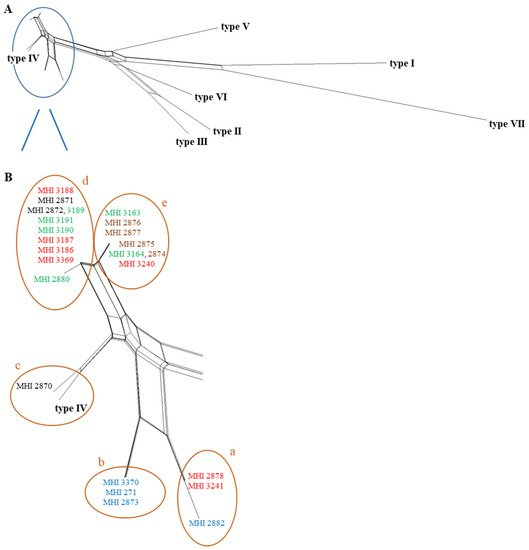