How Do Arabinoxylan Films Interact with Water and Soil?
Previous Article in Journal

Blood is one of the main coproducts from slaughtered animals. The yield of animal blood has reached approximately 10 million tons per year all around the world [1,2]. Animal blood is typically discarded as waste, which causes environmental pollution [3]. Plasma is the product of anticoagulant blood after centrifugation and the removal of blood cells. Blood plasma is a rich source of proteins with high nutritional and functional quality. Most plasma proteins are used as ingredients, mainly as binders, emulsifiers, fat replacers, polyphosphate replacements, and meat curing agents in the food industry [3,4,5,6,7]. Gel-forming ability upon heating is considered to be the most interesting attribute of plasma. Previous studies have reported that the heat-induced gelation of plasma was affected by pH and cysteine [8,9,10,11,12].
Plasma contains a complex mixture of proteins. The typical composition is 50–60% albumin, 40–50% globulins, and 1–3% fibrinogen [10]. Liquid plasma is dried to a powder for better storage and transportation. The protein powder processing eliminates many disadvantageous factors, such as perishability and difficulty to store and transport [13,14]. Spray-drying and freeze-drying are commonly used as a dehydration technique for making protein powder products. Spray-drying has many merits, such as simple operation, drying quickly, low cost, and being suitable for continuous mass production. However, spray-drying may lead to protein denaturation and conformation changes due to a higher temperature, which will probably affect the plasma protein function [15,16]. Freeze-drying can sublimate the moisture in the material directly at a low temperature by doing less harm to the structure of the protein. However, the main disadvantage of freeze-drying is the high cost. A previous study showed that the changes in temperature, moisture, and salt ions during drying could affect the quality of the protein products [17].
Ash is an important factor that can affect the quality of plasma protein powder. It mainly comes from mineral ions in blood and exogenous anticoagulants. According to previous research, the content of ash in plasma protein powder is usually up to 14% [18]. The main ingredients of ash include sodium, magnesium, and calcium, most of which is sodium [18]. Plasma protein powder with low ash content can be produced by concentrating and removing the salt with ultrafiltration and nanofiltration. Sodium chloride (NaCl) at a concentration of 1–3% is needed to facilitate protein solubilization, resulting in the gel [19]. However, the effect of ash content on the functional properties of plasma protein gel is not clear.
The objective of this study was to determine the effects of two different dehydration methods on plasma protein functionality. Additionally, on this basis, the effect of the ash content of freeze-dried plasma on the gelation properties was studied. The results can provide data support for product development and application of plasma protein powder as a food additive.

Plasma protein powders were dissolved in ultrapure water. The protein concentrations of liquid plasma and plasma powder solutions were adjusted to 60 mg/mL, and the pH of these solutions was adjusted to 9. Samples were heated at 80 °C for 45 min to form gels. The gels were immediately cooled to room temperature and stored in the refrigerator at 4 °C overnight to age for further analysis [16]. The water holding capacity (WHC) of the gels was calculated via a centrifugal method [21]. The pieces of the gel after weighing were centrifuged at 1000× g for 10 min at 4 °C. WHC was calculated as the percentage of water retained based on the water content in the gels prior to centrifugation. Three replicates were measured for each sample.
Textures (hardness and elasticity) were analyzed by the texture profile analysis (TPA) test using a texture analyzer (TA-XT2i/5, Stable Micro Systems, Godalming, UK) with a cylindrical probe (P/0.5R) according to the method of Li et al [22]. The parameters were as follows: pre-test speed, 1.0 mm/s; test speed, 0.5 mm/s; withdrawal speed, 1.0 mm/s; depth of probe penetration, 5 mm; minimum trigger force, 5 g; and data acquisition rate, 200 points/s. For each gel, the texture was measured in triplicate.

The microstructures of the gels were investigated by scanning electron microscopy (SEM). The gels formed from liquid and dehydrated plasma were fixed in 3% glutaraldehyde for 48 h at 4 °C, re-fixed in osmic acid for 2 h, and washed three times with phosphate-buffered saline. Then, they were dehydrated using an ethanol series (50%, 70%, 80%, 90%, and 100% (v/v ethanol, successively)). Freeze-drying and sputter-coating were performed according to the procedure of Han et al [23]. Samples were dried using carbon dioxide critical point drying, and coated with Au in a vacuum ion sputtering system. These specimens were observed in a Hitachi SU8010 SEM (Hitachi Ltd., Tokyo, Japan), operating at a voltage of 15 kV [24].

The gels of plasma powders and liquid plasma were prepared in an 80 °C water bath for 45 min and were measured using a Fourier transform infrared spectrometer detector (Tensor 27, Bruker, Germany). The resolution was 4 cm−1, the scanning range was 4000–600 cm−1, and the signal was cumulatively scanned 64 times. Spectral OPUS 7.0 software was used for background subtraction and CO2 atmosphere compensation. Peakfit 4.2 was used for baseline correction, a second derivative peak fitting of gauss points of the amide І band (1600–1700 cm−1), and the estimated position and number of the stack peak of the amide І band.

The level of denaturation for plasma proteins was studied using differential scanning calorimetry (DSC). One hundred microliters of liquid and dehydrated plasma solutions with the same protein concentration (60 mg/mL) were placed in DSC pans, hermetically sealed, and subsequently analyzed using a DSC Q200 (TA Instrument, New Castle, DE, USA). A pan that contained 100 μL of distilled water was used as a control. All pans were heated from 25 to 105 °C at 3 °C/min. The thermal denaturation point (Td, °C), which was the minimal heat flows in the DSC thermogram, and the enthalpy of denaturation (∆H, J/g) determined by the integration of the area belonging to the changes in heat flow, as a function of the temperature, was calculated from the thermogram [25].

All heat-induced gels were carried out in triplicate and each sample was measured in triplicate. Analysis of variance (ANOVA) was performed using SPSS 22 for Windows (SPSS Inc., Chicago, IL, USA). The differences of means were evaluated by the Duncan test (p ≤ 0.05).

3.1. Effect of Drying Methods on Heat-Induced Gelation of Plasma Proteins

3.2. Effect of Ash Contents on Heat-Induced Gelation of Plasma Protein

In the current study, the freeze-dried plasma powder showed better gel properties (higher hardness and elasticity) than the spray-dried plasma powder. On this basis, the effect of the ash content of freeze-dried plasma on the gelation properties was studied. The content of the ash is an important indicator of plasma protein powder products. The main component of ash is sodium, then potassium, and calcium. Research shows that sodium chloride affects the gel properties of the protein [32,33]. In Figure 5A, the WHC of heat-induced gels decreased with the increasing ash contents of freeze-dried plasma protein powders. The WHC for the samples with 6% and 9% ash content was significantly higher than that for the samples with 12%, 15%, and 19% ash content (p < 0.05). No significant difference was found as ash content increased from 12% to 19%. In the present study, we found that the gel from the 6% plasma protein powder had a soft texture and high viscidity (Figure 5B,C). The ash content of plasma powder significantly influenced the hardness and elasticity of heat-induced gels (p < 0.05). The hardness of heat-induced gels increased first and then decreased with the increasing ash content. The gel of the sample with 6% ash content has the lowest hardness and elasticity. The gel of the sample with 15% ash content has the highest hardness and elasticity. The elasticity values were not different between 9%, 12%, and 15% ash content samples. Those results indicated that the texture of gels with low ash content were worse compared to high ash content plasma protein powder. However, the gels with low ash content had a good WHC. This result could be in agreement with that obtained by Meng et al. [34], emphasizing that the WHC decreased with the ion concentration, increasing if the ion concentration was larger than 0.3 mol/L.
During the formation of the gel, the sodium neutralizes the charge on the surface of the protein, leading to the attraction between protein molecules enhancing, and the molecules rapidly aggregating to form a hard gel. When the ash content increases to a certain extent, it is difficult to form gel because of the high concentration of salt-stabilized protein molecular conformations. A previous study showed that high concentrations of NaCl decreased the water-holding capacity of egg-white gels [35], and the present study showed the same result. The reason for this can be attributed to the unstable water molecules trapped in large cavities in the protein gel network [36], and the high solid content existing in the plasma proteins.
The microstructures of the heat-induced gels for different ash content plasma protein powders are shown in Figure 6. The results showed that ordered and three-dimensional network gels were formed. The micrographs did not distinguish between different ash content plasma powders. Therefore, if we just focus on the microstructure of plasma gels, low ash content had little effect on the gels’ microstructure.
The secondary structures of plasma protein powders with different ash contents are shown in Figure 7. The secondary structures of gels from different ash content plasma protein powders were similar. Furthermore, the main secondary structure of the heat-induced gel was β-sheet, followed by β-turn, and there were fewer random coils and α-helixes. A previous study reported that some physical and chemical conditions–pH, ion concentration, sugar content, and metal content of protein solution–affected the protein’s secondary structure [37]. However, the present result showed that the influence of the ash content (6–19%) on the composition and content of the secondary structure was insignificant.

C.H. and D.Z. conceived and designed the experiments; W.W., C.H., and X.S. performed the experiments. C.H., W.W., and D.Z. analyzed the data and wrote the paper. X.S. and L.W. helped perform the analysis with constructive discussions.

This research was financially supported by the Fundamental Research Funds for the Central Non-Profit Scientific Institution (No. S2016JC11), the Modern Agricultural Talent Support Program-Outstanding Talents and Innovative Team of Agricultural Scientific Research (2016-2020), and the National High-level personnel of special support program and National Agricultural Science and Technology Innovation Program in China.

We wish to thank Elena Saguer (University of Girona, Spain) for her help and advice during the course of this work. We would also like to thank Beijing Ershang Group Dahongmen Meat Food Co., Ltd. for their help with blood sampling. 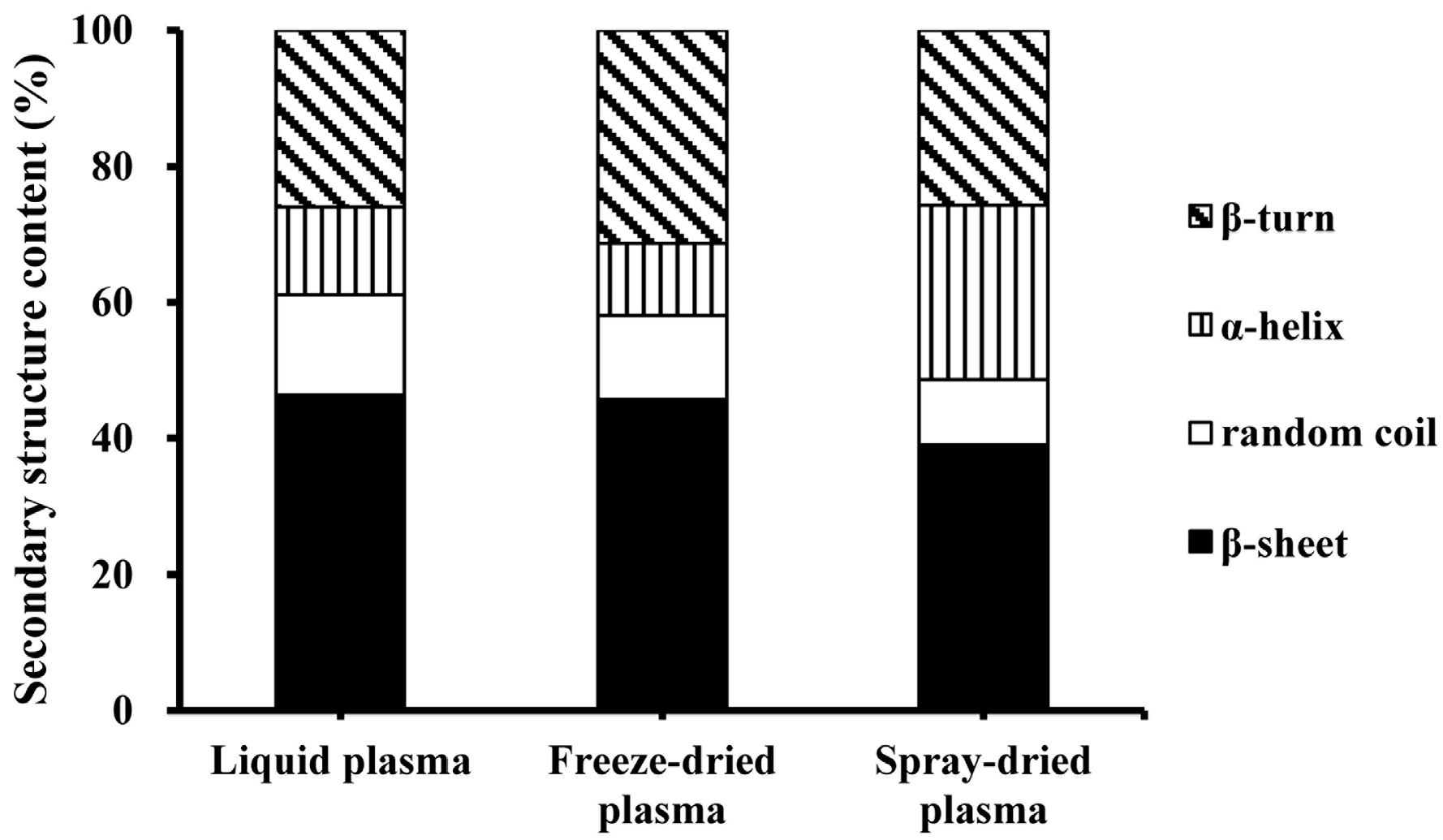 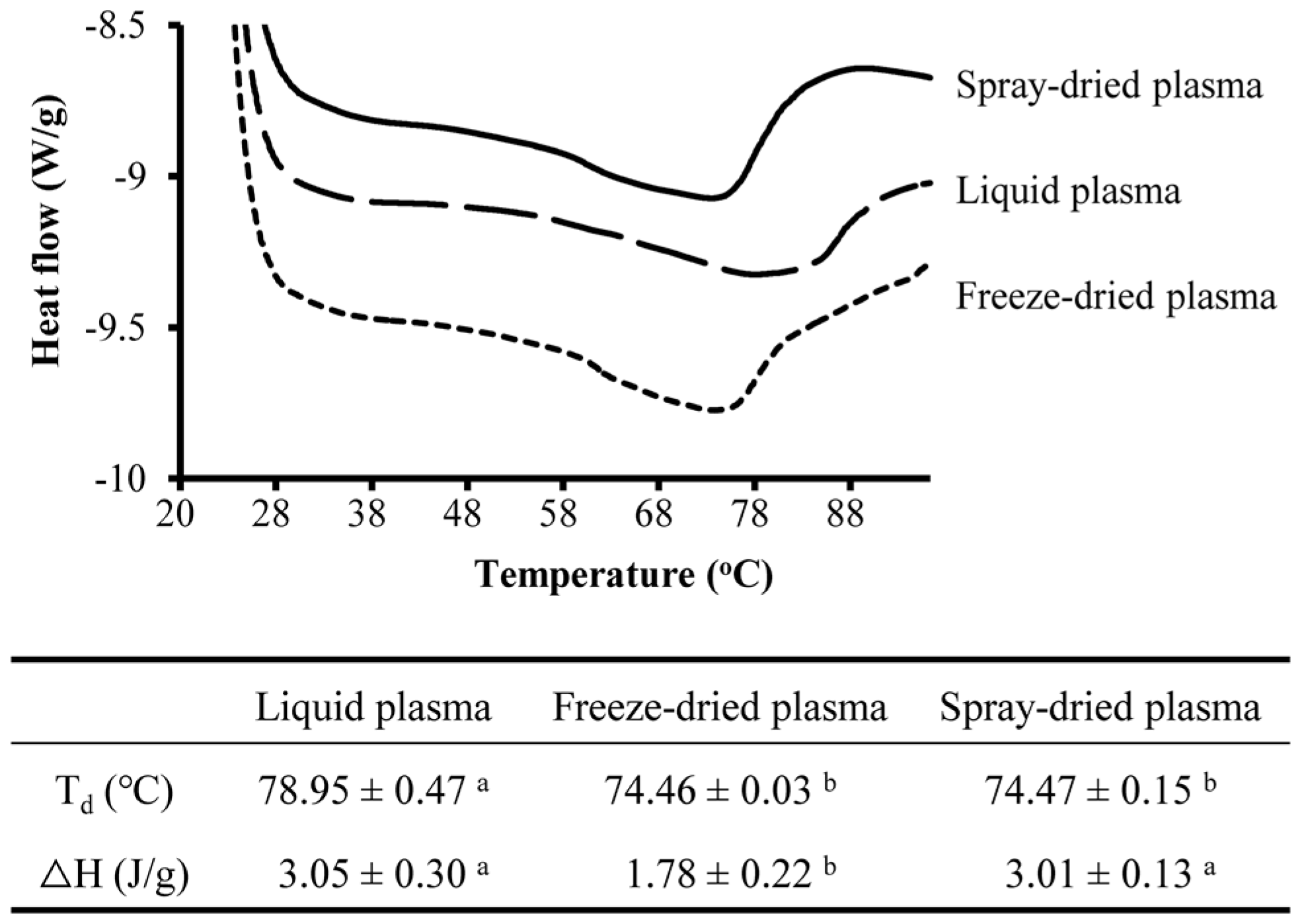 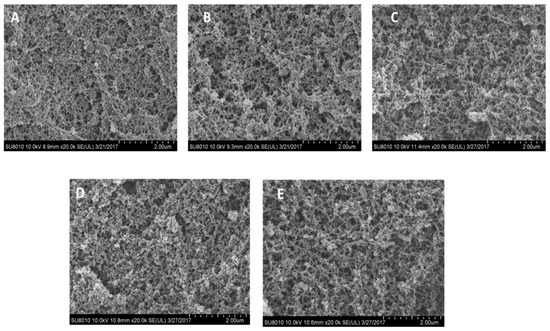 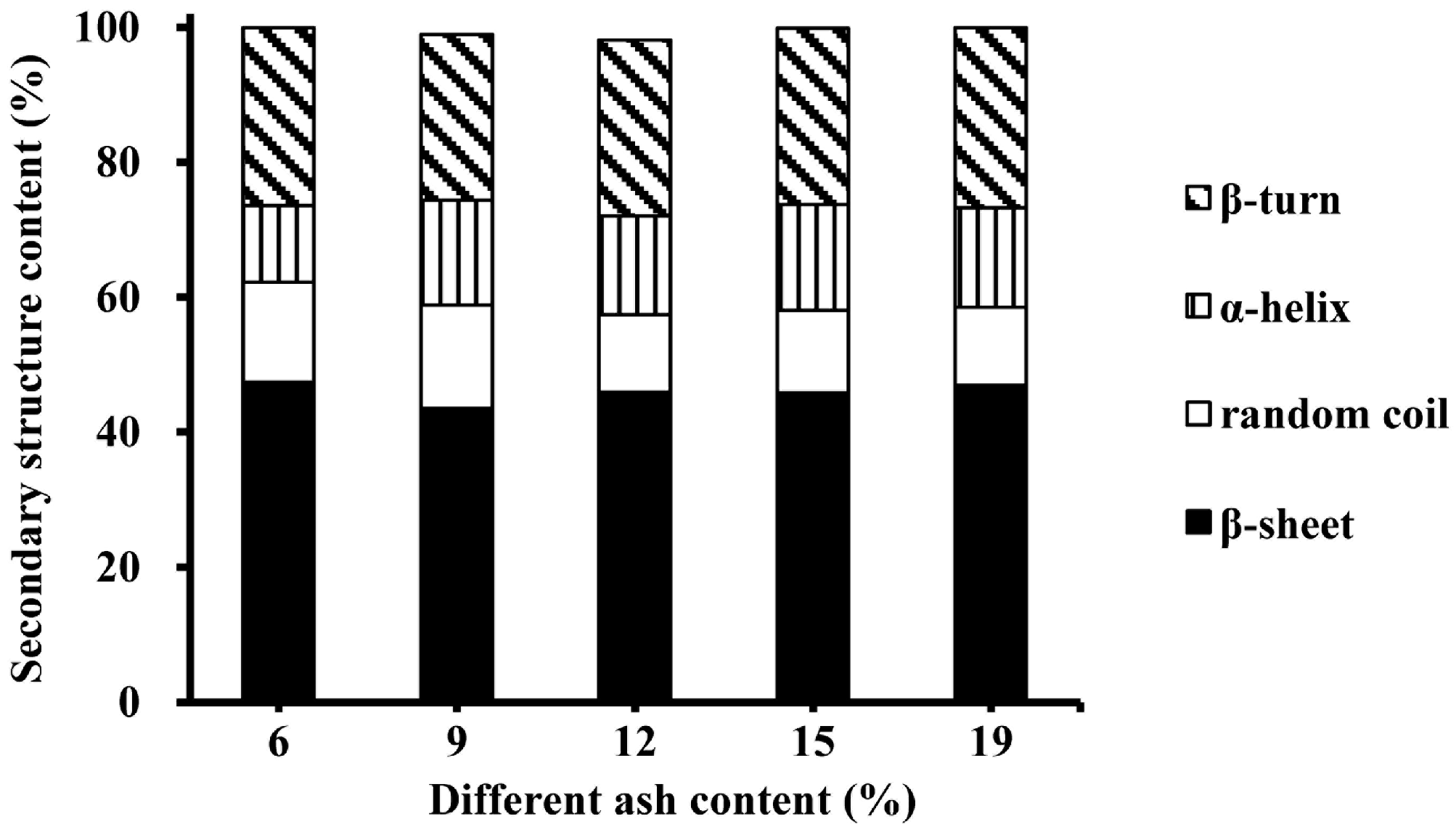