:
Medium chain triglyceride (MCT) oil has been postulated to modulate inflammatory responses, but the detailed mechanisms have not been fully elucidated. Based on recent studies demonstrating that mitochondrial metabolic reprogramming and immune responses are correlated, the current study sought to determine whether MCT oil controls inflammatory responses through modulation of mitochondria using both in vitro and in vivo models. The mitochondrial metabolic phenotypes of macrophages were assessed according to oxygen consumption rate (OCR). Inflammatory responses were assessed for production of cytokines and expression of activation markers. MCT oil was more rapidly oxidized as observed by increased OCR in macrophages. The production of pro-inflammatory cytokines was down-regulated and anti-inflammatory cytokine was elevated by MCT oil. In addition, classically activated M1 and alternatively activated M2 markers were reciprocally regulated by MCT intervention. Overall, up-regulated β-oxidation by MCT contributes to the anti-inflammatory M2-like status of macrophages, which may aid in the dietary prevention and/or amelioration of inflammation.
Keywords:
medium chain triglyceride (MCT); mitochondrial metabolic reprogramming; macrophage polarization

A number of recent studies have demonstrated that mitochondrial energy metabolism has a strong correlation with inflammatory responses, including macrophage polarization [1,2]. Specifically, classically activated M1 macrophages depend on glycolysis and further lactate fermentation, even in the presence of excess oxygen in cytoplasm. In contrast, alternatively activated M2 macrophages seem to utilize oxidative phosphorylation (OXPHOS), for which fatty acids from dietary lipids might aid in the supply of substrate acetyl-CoA through β-oxidation [3].
An extracellular flux analyzer was recently developed to quantify glycolysis and OXPHOS by real-time assessments of proton efflux and oxygen consumption, respectively, in the micromilieu of the cellular environment [4]. In accordance with the above-mentioned cellular energy metabolism, murine bone-marrow derived macrophages (non-polarized, M0) were successfully demonstrated to reciprocally regulate oxygen consumption in lipopolysaccharide (LPS) stimulated M1 vs. interleukin (IL)-4/IL-13 induced M2 subsets [5].
Dietary lipids are one of the major energy suppliers for cellular survival, and many studies have shown that the fatty acid compositions of lipids dictate their physicochemical and/or physiological functions. In this regard, long-chain fatty acids abundant in conventional dietary lipids require a carrier enzyme, carnitine acyltransferase (CAT), to migrate into the mitochondria for β-oxidation [6]. In contrast, medium-chain fatty acids directly penetrate the mitochondrial inner membrane in a CAT-independent manner partially due to lower hydrophobicity. Subsequently, previous studies have shown that medium-chain fatty acids are rapidly metabolized to acetyl-CoA, resulting in increased cellular energy expenditure and reduced body fat accumulation compared to long-chain fatty acids [7,8]. In addition, the substitution of dietary long-chain fatty acids with medium-chains exhibited anti-inflammatory effects by down-regulating pro-inflammatory genes and cytokines in LPS-induced M1 macrophages, yet the detailed mechanisms underlying these phenomena are not fully understood [9].
As an extension to previous observations, in the current study it was hypothesized that dietary supplementation with medium-chain fatty acids in the form of TG up-regulates OXPHOS in macrophages. For this purpose, RAW 264.7 murine macrophages or C57BL/6 male mice were given MCT oil in culture medium or feed pellets, respectively. Following the MCT oil intervention, M1/M2 macrophages were assessed for polarization, cellular energy metabolism using either glycolysis or OXPHOS, and pro-/anti-inflammatory cytokine production.

The murine macrophage RAW 264.7 cell line was purchased from the Korea Cell Line Bank (KCLB, Seoul, Korea). The cells were seeded on 24-well plates at a concentration of 1 × 105 cells/mL in DMEM supplemented with 10% FBS and 1% antibiotic/antimycotic solution (10,000 U/mL penicillin G, 10,000 μg/mL streptomycin, 25 μg/mL amphotericin B). Medium chain fatty acid-triglyceride (MCT) enriched oil was purchased from Nisshin Oillio (Healthy Resetta™, Tokyo, Japan), and canola oil purchased from CJ CheilJedang (Seoul, Korea) served as a control. MCT and control oils were dissolved in DMSO (Daejung Chemicals, Siheung, Korea) and the RAW 264.7 cells were treated for 24 h at 37 °C in a 5% CO2 incubator. The final concentration of DMSO in the cell culture medium was maintained under 0.01% (v/v). Following oil intervention in medium, macrophages were stimulated by incubating them with 500 ng/mL of TLR ligand approved LPS from Escherichia coli O111:B3 (Sigma-Aldrich, St. Louis, MO, USA) for 12 h [10].

C57BL/6 male mice at the age of 4 weeks were purchased from Raon Bio (Yongin, Korea). The care, use, and treatment of all mice in this study were conducted in strict accordance with guidelines from the Institutional Animal Care and Use Committees of Kyung Hee University. Custom-made mouse diets were purchased from Raon Bio (Yongin, Korea), with the control AIN-76A diet modified by replacement of corn oil with 80% (MCT high diet) or 20% MCT oil (MCT low diet) (Table 1). Following 1 week of mouse acclimation by feeding the AIN-76A diet, mice were randomly separated into three groups (n = 7) and fed either MCT high, MCT low, or control AIN-76A diets for 4 weeks ad libitum. After dietary interventions, mice were sacrificed in a CO2 chamber.

Following stimulation of RAW 264.7 cells with LPS or polarization of BMDMs, pro-inflammatory (interleukin (IL)-6 and tumor necrosis factor (TNF)-α) or anti-inflammatory cytokines (IL-10) in the culture medium were quantified by enzyme-linked immunosorbent assay (ELISA) according to the manufacturer’s instructions (BD Biosciences, San Jose, CA, USA). In brief, 96-well plates were coated with capture antibodies overnight at 4 °C. Then, excess antibodies were washed with assay diluent. Cell culture supernatants and each cytokine standard were aliquoted into each well at designated concentrations. After incubating at room temperature and washing with the provided buffer, the captured cytokines were incubated with biotinylated detection antibodies and streptavidin-horse radish peroxidase conjugates (sAv-HRP) at room temperature. Following a series of washing steps, substrate solution was added for enzymatic reactions, and a stop solution (1M H3PO4) was applied. After the final reaction steps, the absorbance was measured with a microplate reader (Bio-Rad, Hercules, CA, USA) at a 450-nm wavelength.

The animal experiments were conducted with the approval of the Institutional Animal Care and Use Committee of Kyung Hee University (approval ID: KHUASP(GC)-17-030).

Given that the mitochondrial respiration of macrophages was modulated by MCT oil through up-regulation of oxygen consumption in vitro (RAW 264.7 cells) and ex vivo (murine BMDMs), we examined whether the regulation of mitochondrial respiration by MCT oil affects the expressions of activation markers on macrophage surfaces. In a cellular model using RAW 264.7 cells, costimulatory molecules, i.e., expression of CD80 (B7-1), CD86 (B7-2), and MHC-II, were determined by specific staining with fluorescence-conjugated antibodies followed by flow cytometry. Canola oil treatment significantly upregulated (p < 0.05) CD80 expression in RAW 264.7 cells (25,455 ± 2963 MFI) compared to non-oil-treated controls (16,115 ± 1485 MFI). However, MCT oil-treated cells exhibited comparable expression of CD80 (17,205 ± 253.7 MFI) to non-oil-treated controls (Figure 3A). In addition, MCT oil significantly suppressed the expressions of CD86 (2399 ± 51.46 MFI) and MHC-II molecules (4376 ± 392.5 MFI) compared to non-oil-treated controls (2705 ± 52.93 MFI for CD86 expression and 6490 ± 567.5 MFI for MHC-II expression), while canola oil did not affect the expressions of either CD86 (2652 ± 52.93 MFI) or MHC-II (5726 ± 167.1 MFI) (Figure 3B,C). These results indicate that MCT oil has a potent anti-inflammatory effect on LPS-stimulated M1-like condition in macrophages.
Alternatively, BMDMs isolated from normal diet-fed mice were induced to transform to either M1 or M2 phenotypes by the addition of LPS or IL-4 in culture medium, respectively. Following differentiation, the expressions of CD11c (M1 marker) and CD206 (M2 marker) were assessed by specific antibody staining and flow cytometry. Following LPS stimulation, cells exhibited significantly elevated expressions of CD11c molecules (LPS 26,335 ± 1109 vs. non-LPS 8995 ± 1153 MFI). Cells from MCT high-fed mice in which 80% of total dietary lipid (corn oil) was substituted for MCT tended to suppress the expression of CD11c (21,508 ± 1201 MFI) but the difference was not significant. Of particular interest, cells from MCT low-fed mice, in which MCT replaced 20% of total dietary lipid (corn oil), exhibited significantly down-regulated expression of CD11c (19,981 ± 2132 MFI) compared to AIN-76A normal diet-fed controls (26,335 ± 1109 MFI) (Figure 3D). In IL-4-treated conditions inducing M2 polarization, increase of CD206 expression by IL-4 stimulation in the AIN-76-A diet fed group (76,703 ± 8136 MFI) was significantly augmented by dietary interventions with high levels of MCT (MCT High, 107,127 ± 6089 MFI). Moderate doses of MCT in the MCT low diet group resulted in expression of CD206 (82,656 ± 6323 MFI) that was intermediate between those of AIN-76A and MCT high diet-fed mice, but the difference was not significant (Figure 3E).
Taken together, these results indicate that MCT oil suppresses inflammatory surface markers while elevating anti-inflammatory activation markers of murine macrophages both in vitro and ex vivo.

All authors declare that there is no conflict of interest. 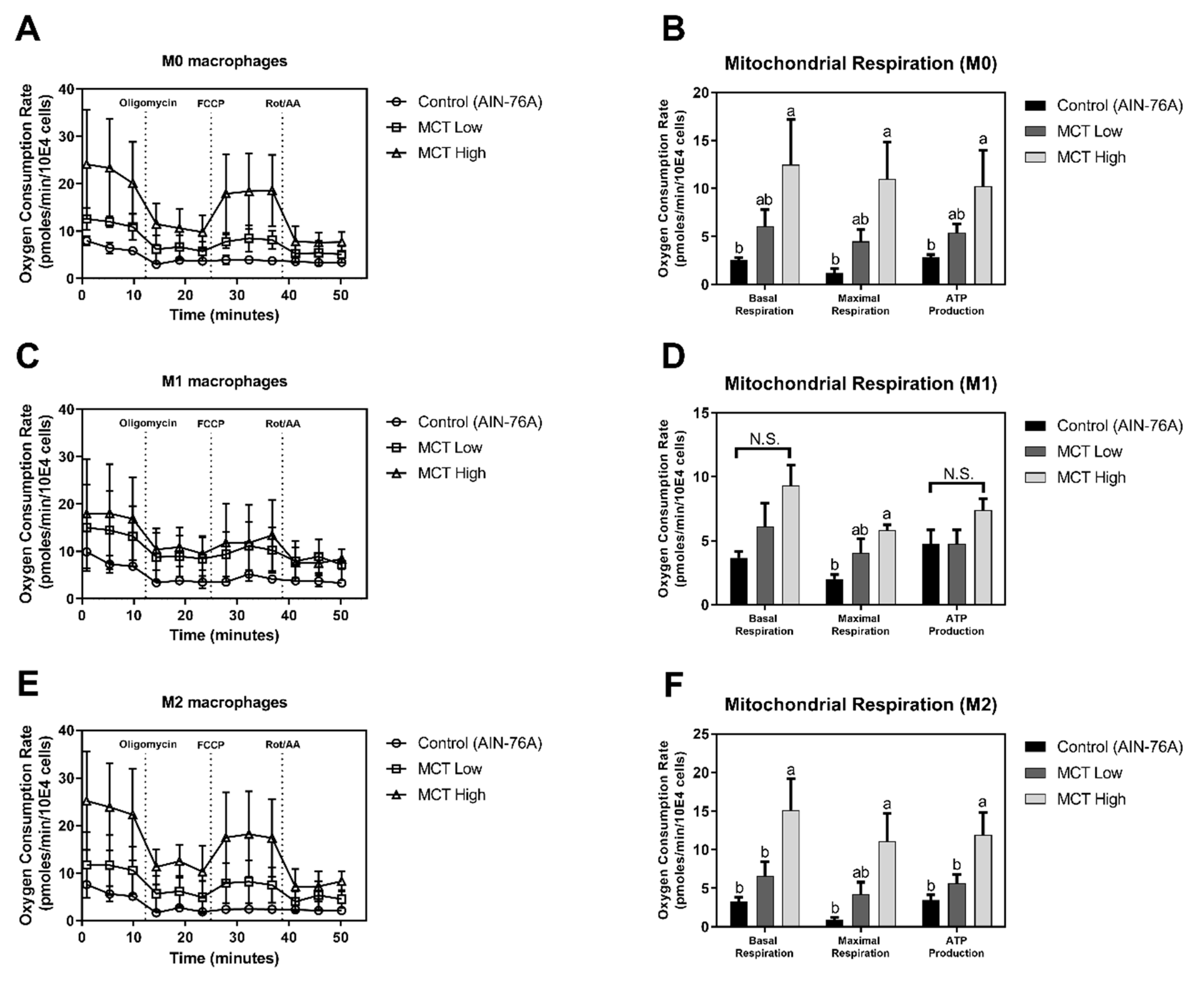 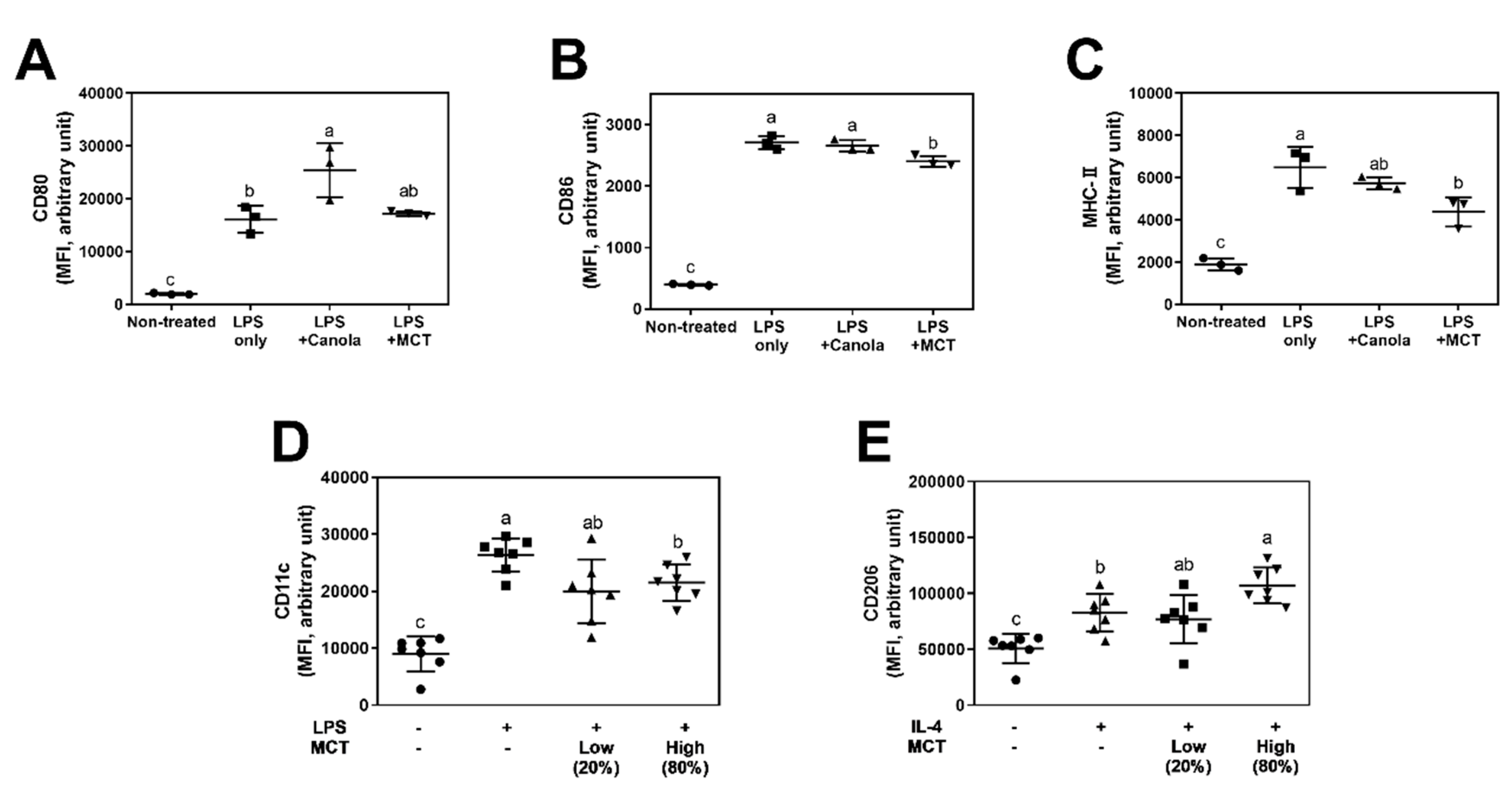 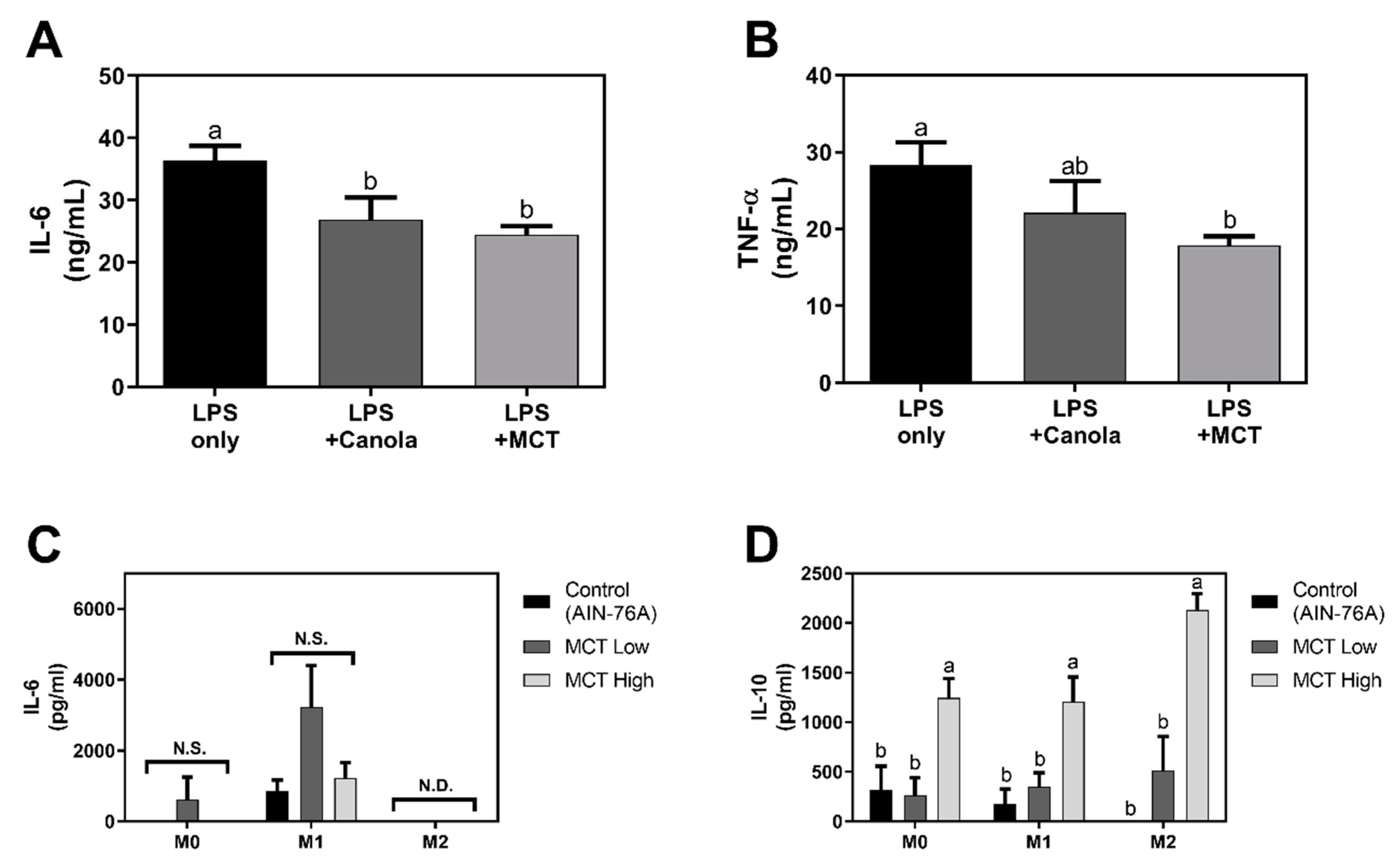