Old Fashioned vs. Ultra-Processed-Based Current Diets: Possible Implication in the Increased Susceptibility to Type 1 Diabetes and Celiac Disease in Childhood
Next Article in Special Issue

Nutrient and Total Polyphenol Contents of Dark Green Leafy Vegetables, and Estimation of Their Iron Bioaccessibility Using the In Vitro Digestion/Caco-2 Cell Model

The present study investigates the detection of lard in cocoa butter through changes in fatty acids composition, triacylglycerols profile, and thermal characteristics. Cocoa butter was mixed with 1% to 30% (v/v) of lard and analyzed using a gas chromatography flame ionization detector, high performance liquid chromatography, and differential scanning calorimetry. The results revealed that the mixing of lard in cocoa butter showed an increased amount of oleic acid in the cocoa butter while there was a decrease in the amount of palmitic acid and stearic acids. The amount of POS, SOS, and POP also decreased with the addition of lard. A heating thermogram from the DSC analysis showed that as the concentration of lard increased from 3% to 30%, two minor peaks at −26 °C and 34.5 °C started to appear and a minor peak at 34.5 °C gradually overlapped with the neighbouring major peak. A cooling thermogram of the above adulterated cocoa butter showed a minor peak shift to a lower temperature of −36 °C to −41.5 °C. Values from this study could be used as a basis for the identification of lard from other fats in the food authentication process. View Full-Text
Keywords: cocoa butter; lard; fatty acids methyl ester; triacylglycerol; adulteration; food cocoa butter; lard; fatty acids methyl ester; triacylglycerol; adulteration; food
►▼ Show Figures 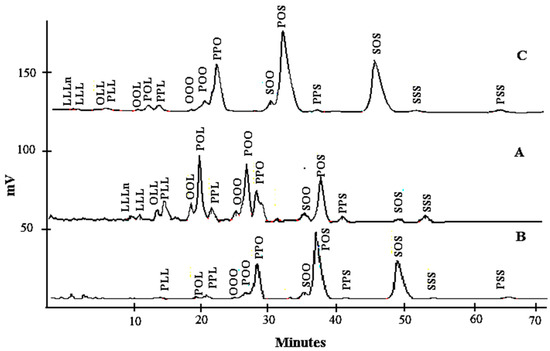