Influence of Muscle Type on Physicochemical Parameters, Lipolysis, Proteolysis, and Volatile Compounds throughout the Processing of Smoked Dry-Cured Ham
Next Article in Special Issue

Characterization of Feruloyl Esterase from Bacillus pumilus SK52.001 and Its Application in Ferulic Acid Production from De-Starched Wheat Bran

Feruloyl esterase (FAE; EC 3.1.1.73) catalyzes the hydrolysis of the 4-hydroxy-3-methoxycinnamoyl group in an esterified sugar to assist in waste biomass degradation or to release ferulic acid (FA). An FAE-producing strain was isolated from humus soil samples and identified as Bacillus pumilus SK52.001. The BpFAE gene from B. pumilus SK52.001 was speculated and heterogeneously expressed in Bacillus subtilis WB800 for the first time. The enzyme exists as a monomer with 303 amino acids and a molecular mass of 33.6 kDa. Its specific activity was 377.9 ± 10.3 U/(mg protein), using methyl ferulate as a substrate. It displays an optimal alkaline pH of 9.0, an optimal temperature of 50 °C, and half-lives of 1434, 327, 235, and 68 min at 50, 55, 60, and 65 °C, respectively. Moreover, the purified BpFAE released 4.98% FA of the alkali-acidic extractable FA from de-starched wheat bran (DSWB). When the DSWB was enzymatically degraded by the synergistic effect of the BpFAE and commercial xylanase, the FA amount reached 49.47%. It suggested that the alkaline BpFAE from B. pumilus SK52.001, which was heterologously expressed in B. subtilis WB800, possesses great potential for biomass degradation and achieving high-added value FA production from food by-products. View Full-Text
Keywords: feruloyl esterase; Bacillus pumilus; characterization; synergistic effect feruloyl esterase; Bacillus pumilus; characterization; synergistic effect
►▼ Show Figures 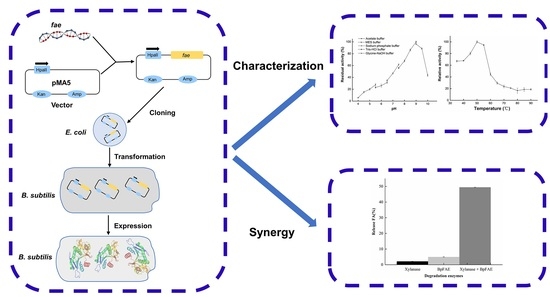