The UHPLC-QTOF-MS Phenolic Profiling and Activity of Cydonia oblonga Mill. Reveals a Promising Nutraceutical Potential
Next Article in Special Issue

Characterization of Feruloyl Esterase from Bacillus pumilus SK52.001 and Its Application in Ferulic Acid Production from De-Starched Wheat Bran

Influence of Muscle Type on Physicochemical Parameters, Lipolysis, Proteolysis, and Volatile Compounds throughout the Processing of Smoked Dry-Cured Ham

The influence of muscle type (biceps femoris, BF and semimembranosus, SM) on physicochemical parameters, volatile compounds, and the extent of proteolysis and lipolysis during the manufacturing of smoked dry-cured ham was investigated. A total of fifty smoked hams were sampled: raw ham, after salting, smoking, drying, and ripening. Almost all physicochemical parameters were affected by muscle type, manufacturing stage and their interactions. SM had lower water, ash, NaCl content, and water activity (aw), while fat and protein content were higher after ripening compared to BF. BF showed higher L*a*b* values compared to SM. The results of texture profile analysis showed that almost all analyzed parameters were influenced by muscle type and production stage. A total of 88 volatile compounds were identified, showing an increase in its number during processing: 31 volatile compounds were identified in raw ham and 72 after the ripening phase. Aldehydes and phenols were the predominant groups of compounds, followed by alcohols, ketones, aromatic hydrocarbons, aliphatic hydrocarbons, esters, and terpenes. Muscle type and production phase significantly affected lipid oxidation and the index of proteolysis: in SM, thiobarbituric acid reactive substances (TBARS) increased faster than in BF, while proteolysis had an opposite effect and was more pronounced in BF. View Full-Text
Keywords: dry-cured ham; smoking; processing; aromatic profile; GC-MS; physicochemical parameters; lipolysis; proteolysis dry-cured ham; smoking; processing; aromatic profile; GC-MS; physicochemical parameters; lipolysis; proteolysis
►▼ Show Figures 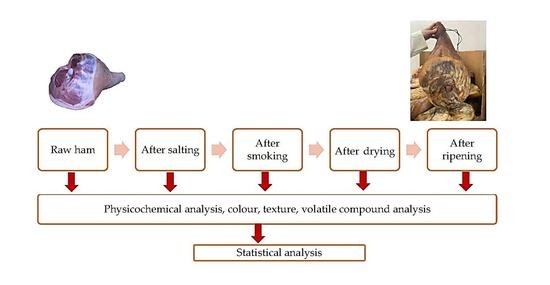