Artichoke by Products as a Source of Antioxidant and Fiber: How It Can Be Affected by Drying Temperature
Previous Article in Special Issue

Nutritional and Antioxidant Potential of Fiddleheads from European Ferns

Ferns are part of the diet and traditional medicine in East Asia, North America, and Oceania, however, their importance has been forgotten in Europe. Here, the nutritional and antioxidant potential of young fern fronds (fiddleheads) of eight families were studied. Most of the tested fern species excelled in high antioxidant capacity when compared to the reference leafy vegetables spinach and rocket. On average, the total phenol content reached 220 mg·g−1 of extract dry weight for all fiddleheads, and 15 out of 24 tested species exceeded 1 g Trolox equivalent per gram of extract dry weight in Oxygen Radical Absorbance Capacity (ORAC) assay. On the other hand, fiddleheads contained a comparable amount of carotenoids and ascorbic acid with the reference vegetables. In the case of fatty acid composition, fiddleheads contained especially high amounts of essential omega-3 (n3) and omega-6 (n6) polyunsaturated fatty acids with a beneficial n6/n3 ratio. The n6/n3 ratio in all tested species was between 2 and 6.4, whereas the ratio in the reference vegetables was below 0.4. All in all, fiddleheads from European ferns are a rich source of valuable antioxidants and essential fatty acids with a desirable n-6/n-3 ratio and may thus form an alternative source of these compounds, especially for those people not consuming fish and fish products. View Full-Text
Keywords: fern species; fiddleheads; fatty acid profile; natural antioxidants; nutritional quality; alternative vegetable fern species; fiddleheads; fatty acid profile; natural antioxidants; nutritional quality; alternative vegetable
►▼ Show Figures 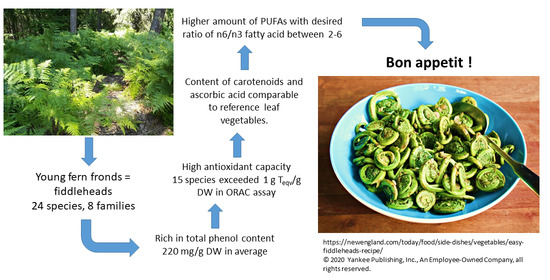