Controlled Hydrodynamic Cavitation: A Review of Recent Advances and Perspectives for Greener Processing

In this study, three microfluidic devices with different geometries are fabricated on silicon and are bonded to glass to withstand high-pressure fluid flows in order to observe bacteria deactivation effects of micro cavitating flows. The general geometry of the devices was a micro orifice with macroscopic wall roughness elements. The width of the microchannel and geometry of the roughness elements were varied in the devices. First, the thermophysical property effect (with deionized water and phosphate-buffered saline (PBS)) on flow behavior was revealed. The results showed a better performance of the device in terms of cavitation generation and intensity with PBS due to its higher density, higher saturation vapor pressure, and lower surface tension in comparison with water. Moreover, the second and third microfluidic devices were tested with water and Salmonella typhimurium bacteria suspension in PBS. Accordingly, the presence of the bacteria intensified cavitating flows. As a result, both devices performed better in terms of the intensity of cavitating flow with the presence of bacteria. Finally, the deactivation performance was assessed. A decrease in the bacteria colonies on the agar plate was detected upon the tenth cycle of cavitating flows, while a complete deactivation was achieved after the fifteenth cycle. Thus, the proposed devices can be considered as reliable hydrodynamic cavitation reactors for “water treatment on chip” applications. View Full-Text
Keywords: hydrodynamic cavitation; water treatment; bacteria deactivation; Salmonella typhimurium; microfluidics hydrodynamic cavitation; water treatment; bacteria deactivation; Salmonella typhimurium; microfluidics
►▼ Show Figures 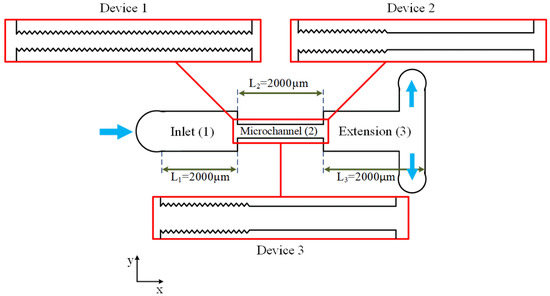