Physicochemical Properties of Guava Snacks as Affected by Drying Technology

A recently proposed moving-boundary model for food isothermal dehydration was applied to analyze the dehydration kinetics of ellipsoidal cocoa beans, characterized by a moderate shrinkage and a non-uniform initial distribution of water content between the core and the shell of the bean. The aim is to predict the influence of air velocity and non-uniformity of the initial water distribution on the dehydration rates, as well as the temporal evolution of the water content in the core and in the shell and of the characteristic lengths of the ellipsoidal bean. The model proved capable of accurately describing the two-phases dehydration process: an initial fast dehydration of the shell, characterized by higher dehydration rates, followed by a slower dehydration of the core, characterized by a linear relationship between the dehydration rate and the moisture ratio . A shortcut method to estimate the effective water diffusivity D is also proposed, deriving from the basic observation that the asymptotic exponential behaviour of the dehydration curve for an ellipsoidal bean coincides with that of an equivalent sphere, with the same surface-to-volume ratio.
Keywords: drying kinetics; 3-d modeling; moving-boundary model; diffusion coefficient; cocoa beans drying kinetics; 3-d modeling; moving-boundary model; diffusion coefficient; cocoa beans
►▼ Show Figures 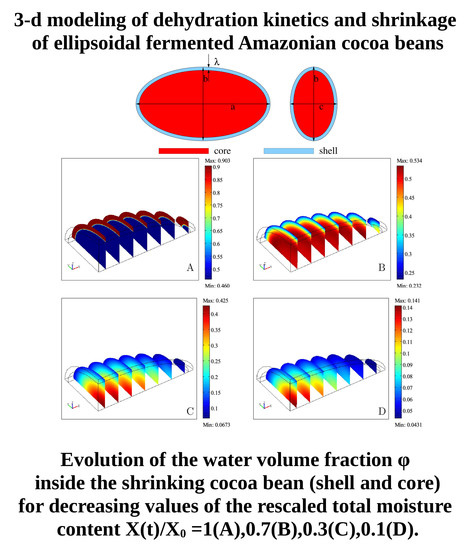