Mezcal yeasts were evaluated for their potential as grape-juice fermenters, characterizing their fermentation performance, both in terms of primary and volatile metabolites. Experiments were first carried-out in a semi-synthetic medium and then on grape juice, and population dynamics of the chosen mixed inoculum was assessed in grape juice. Accordingly, we initially tested 24 mezcal yeasts belonging to ten different species, and chose those that were more productive and stress tolerant for the mixed (dual) inoculum, having a final selection of three Saccharomyces cerevisiae strains (plus Fermichamp, a commercial wine strain) and three non-Saccharomyces strains, belonging to Kluyveromyces marxianus, Torulaspora delbrueckii, and Zygosaccharomyces bailii species. For the combination S. cerevisiae/T. delbrueckii (Sc/Td) mixed inoculum, we observed increasing isoamyl alcohol and phenyl ethyl acetate concentrations, as compared with the use of individual Saccharomyces strains, which resulted in a fruitier aroma profile. Alcohol final concentration was in average lower for the Sc/Td inoculum (fermentation power, FP, 13.6) as compared with the individual mezcal Saccharomyces strains (FP 14.3), and it was the highest when Td was co-cultured with the commercial strain (FP 14.6). Overall, our results show the feasibility of using yeasts isolated from mezcal as a novel source of inoculum for wine-type fermentation. View Full-Text
Keywords: yeasts mixed inoculum; mezcal; Saccharomyces; non-Saccharomyces yeasts mixed inoculum; mezcal; Saccharomyces; non-Saccharomyces
►▼ Show Figures 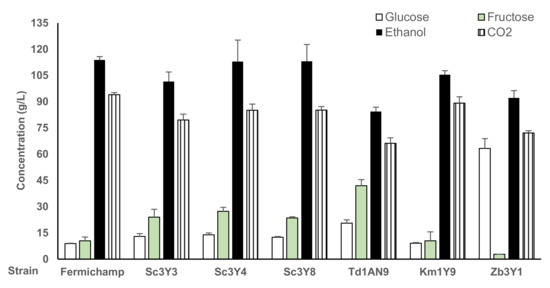