The computational domain considered in the present study is illustrated in Figure 1b. Here, ribs of a square cross-section, each with a height equal to 0.1 of the channel height (=H), are installed at intervals of 10 e on both sides of the channel. The computational domain, holding three periods in the x direction, and the domain, made up of one period, were compared, and the same time-averaged result was secured. Finally, the domain was set to have one period as presented in Figure 1b. For the laminar flow, a two-dimensional simulation was performed. In the turbulence simulation, the spanwise domain was set to 2.5 π e, which showed zero fall-off in the two-point correlation in the smooth channel simulation [9,11]. The solid wall thickness was set to 3 e, in accordance with the actual gas turbine blade [16]; this value corresponds to 30% of the channel height [21,26].
For the boundary conditions, periodic conditions are imposed on the main flow direction (x) and spanwise direction (z). Usually, five or more ribs are reportedly installed in the cooling passage of a gas turbine in the flow direction [16], and the developing effect becomes negligible from the third rib [32]. In the wall normal direction (y), no slip condition and constant temperature condition are appointed on the top and bottom surfaces of the computational domain.
The grid system was composed of 128 × 256 × 48 notes in the streamwise direction (x), wall normal direction (y), and spanwise direction (z), respectively (Figure 1b). A non-uniform mesh was adopted in the x and y coordinates, while a uniform mesh was placed in the z direction. This is comparable to the resolution derived by Tafti [33] for the grid independent solution obtained via LESs of a ribbed duct.
The governing equations considered in this study are the following incompressible Navier–Stokes and energy equations (Equations (1)–(3)):
In this study, a finite volume solver [34] was employed to solve the above equations. The pressure–velocity coupling is a fractional step method. All spatial discretizations were carried out by the central difference method with second-order accuracy. Time integration was performed using a semi-implicit method that combines the Crank–Nicolson method and the third-order Runge–Kutta method.
This code has been revised to treat solids in the flow field as the immersed boundary method (IBM) [35]. ms in Equation (1) and fi in Equation (2) are mass source and momentum forcing that satisfy the no slip condition on a solid surface, respectively. Using the IBM, the code that could contain solids was later revised to solve for convective heat transfer as well [36].
In this study, the revised [19] code was used to analyze the conjugate heat transfer. In Equation (3), C* and K* are the heat capacity ratio and thermal conductivity ratio of the solid and fluid, respectively; ω is a convection revising term that is 0 in the cell containing the solid–fluid interface and 1 for other cells to account for the conduction between the solid and the fluid. In Equation (3), ξ was added to secure the second-order accuracy in the cell containing the boundary [19].
Turbulent flow was simulated using the LES. In Equations (1)–(3), τij and qj are the sub-grid scale (SGS) stress and heat flux, respectively; τij is determined as a dynamic SGS model using scale correlation by framing a test filter around the cell [37,38]; and qj is also determined dynamically like τij to secure better results in problems where velocity and temperature are dissimilar [39]. The simulation was carried out for 10,000 time steps to reach a fully developed flow. After the initial steps, an additional 10,000 time steps (t Ub/Dh = 5) were performed to obtain the statistics.

For the validation of the simulation code, the time-averaged flow field and temperature field were compared with those reported in previous studies as shown in Table 1.
Figure 2a compares the time-averaged flow fields. The streamlines obtained by the LESs are in good agreement with the particle image velocimetry (PIV) measurement data [41]. Figure 2b shows the time-averaged temperature field, indicating the formation of a high-temperature region behind the rib because of an inactive heat transfer.
Figure 2c presents a comparison of the Nusselt number ratio at the channel wall between the ribs. The results obtained for both the isothermal (black dashed line) and K* = 566 (red line) conditions agree well with those of Liou et al. [40] with the same blockage ratio. The inter-rib heat transfer under isothermal conditions with conjugate K* = 566 is similar. At K* = 566, the heat transfer coefficient due to the conduction effect is less than that due to the isothermal condition at 2 < x/e < 5 and greater than that due to the downstream isothermal condition.
A similar trend was observed when comparing the experimental results of pure convection [14] (pink triangle) and conjugate heat transfer [15] (blue circle). The data of [14,15] have a Nusselt number ratio that is up to 30% smaller than the rest of the data near the reattachment point. The difference seems to be due to the difference in the blockage ratio. It was confirmed that the flow pattern as well as the local heat transfer, including the conduction effect, were properly predicted.

3.1. Effect of Reynolds Number on the Isothermal Ribbed Channel

Figure 3 shows the time-averaged flow and temperature fields according to the Reynolds number in pure convection. For the three Reynolds numbers, flow separation occurs after the rib, and a corner vortex exists before the rib. The reattachment points are all around x/e = 5.5, but slightly upstream for Re = 30,000. In the turbulent flow (Re = 7000 and 30,000), a secondary vortex occurs between the separation bubble and the downstream corner. In the laminar flow, no flow separation is observed at the upstream edge of the rib, whereas such a separation is evident in the turbulent flow case.
In the temperature fields (Figure 3b) observed for all the three cases, the thermal boundary layer is thick at 0 < x/e < 4 with a recirculation bubble and the thinnest at 5 < x/e < 6 near the reattachment point. As the Reynolds number increases, mixing with the main flow is observed, the thermal boundary layer becomes thinner, and the low-temperature (blue) region approaches the wall. In the laminar flow (Re = 1000), the isotherm spacing is relatively uniform, whereas that in the turbulent flow is excessively narrow at the high temperature side (red color). In the turbulent flow, the dimensionless temperature of the main flow (y/e = 3) is lowered at Re = 30,000 than at Re = 7000, and the isotherm is narrowed at 0 < x/e < 1.
Figure 4 compares the local wall heat transfer distribution according to the Reynolds number for pure convection. The local Nusselt number is expressed as a ratio with Nu0, which represents the Nusselt number in the absence of ribs. In the channel wall between the ribs (Figure 4a), the laminar flow (green line in Figure 4a) shows a value less than 1 in the entire section. The data reported in [8] (green triangles in Figure 4a) and the difference occurring near the rib can be considered as a three-dimensional effect based on the observations reported in [8].
In the turbulent flow (red and blue lines in Figure 4a), the heat transfer is promoted two to three times in the inter-rib wall. The Nusselt number ratio at Re = 30,000 (red line) is greater than that at Re = 7000 (blue line) at 0 < x/e < 3, where the recirculation flow occurs. In contrast, at 3 < x/e < 7 near the reattachment point, the blue line lies above the red line. At 3 < x/e < 7, the experimental value obtained at Re = 10,200 showed a higher Nusselt number ratio than that at Re = 30,000, consistent with the LES result. At 0 < x/e < 1 where the secondary vortex exists, a local peak is observed in the red line, but not in the blue line. This is because mixing with the main flow is more active when Re = 30,000, which can also be confirmed in the temperature field shown in Figure 3b.
The difference in the Nusselt number ratio between the laminar and turbulent flows in the rib is less than that in the channel wall (Figure 4b). In both the laminar and turbulent flows, the most active heat transfer is observed at the upstream edge of the rib. For the turbulent flow (red and blue lines in Figure 4b), on the windward surface of the rib (0 < s/e < 1), the Nusselt number profile is upwardly convex at 0 < s/e < 0.5 due to the impinging effect of the main flow reattached to the wall [9].

In this study, a conjugate heat transfer analysis was performed by incorporating the heat conduction of the wall in a ribbed channel, and the heat transfer characteristics according to the thermal conductivity ratio of the solids and fluids as well as the Reynolds number were evaluated. The main findings in this study are summarized below:

This work was supported by the Agency for Defense Development Grant funded by the Korean Government (UD220004JD).

Data is contained within this article. 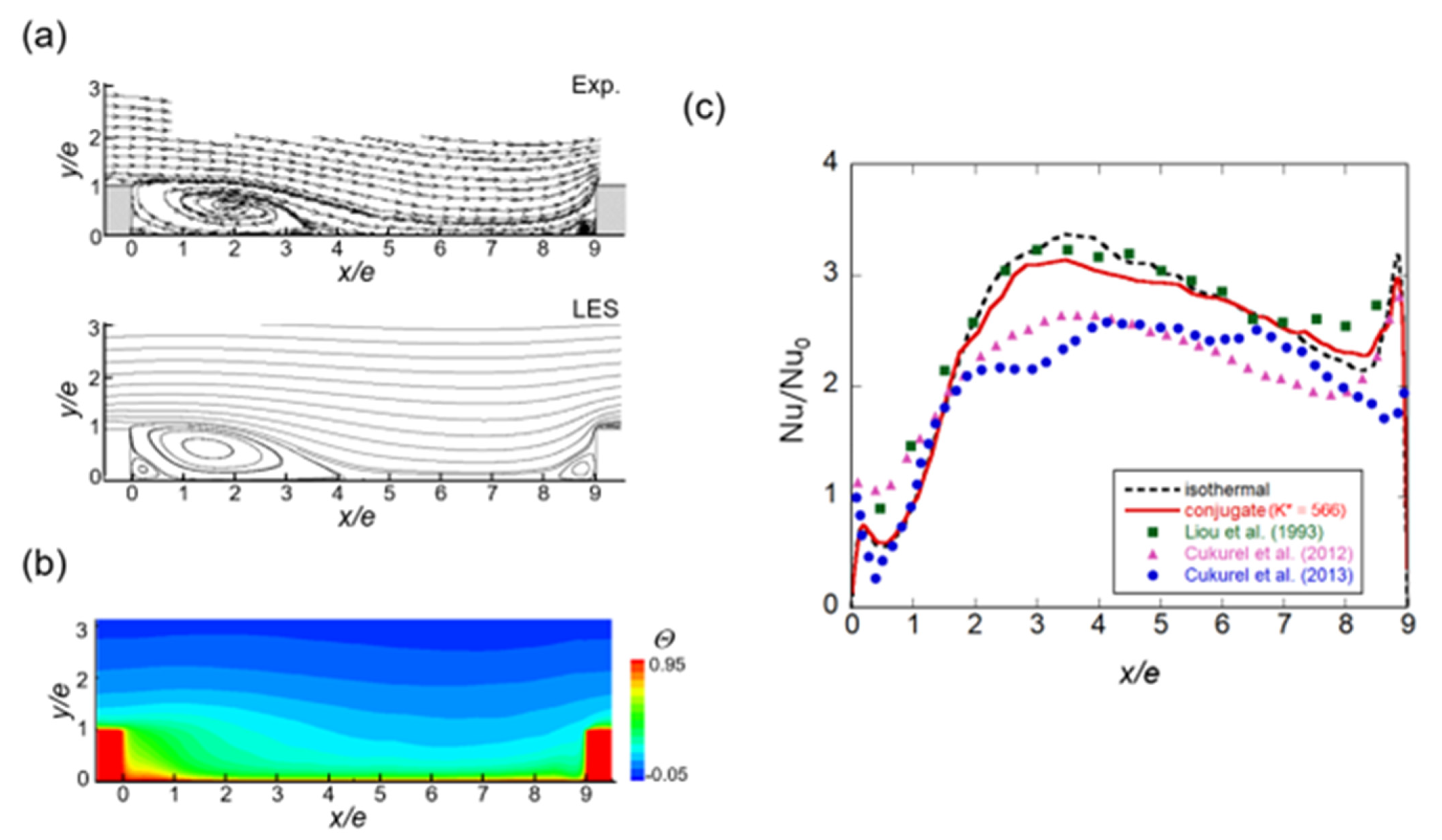 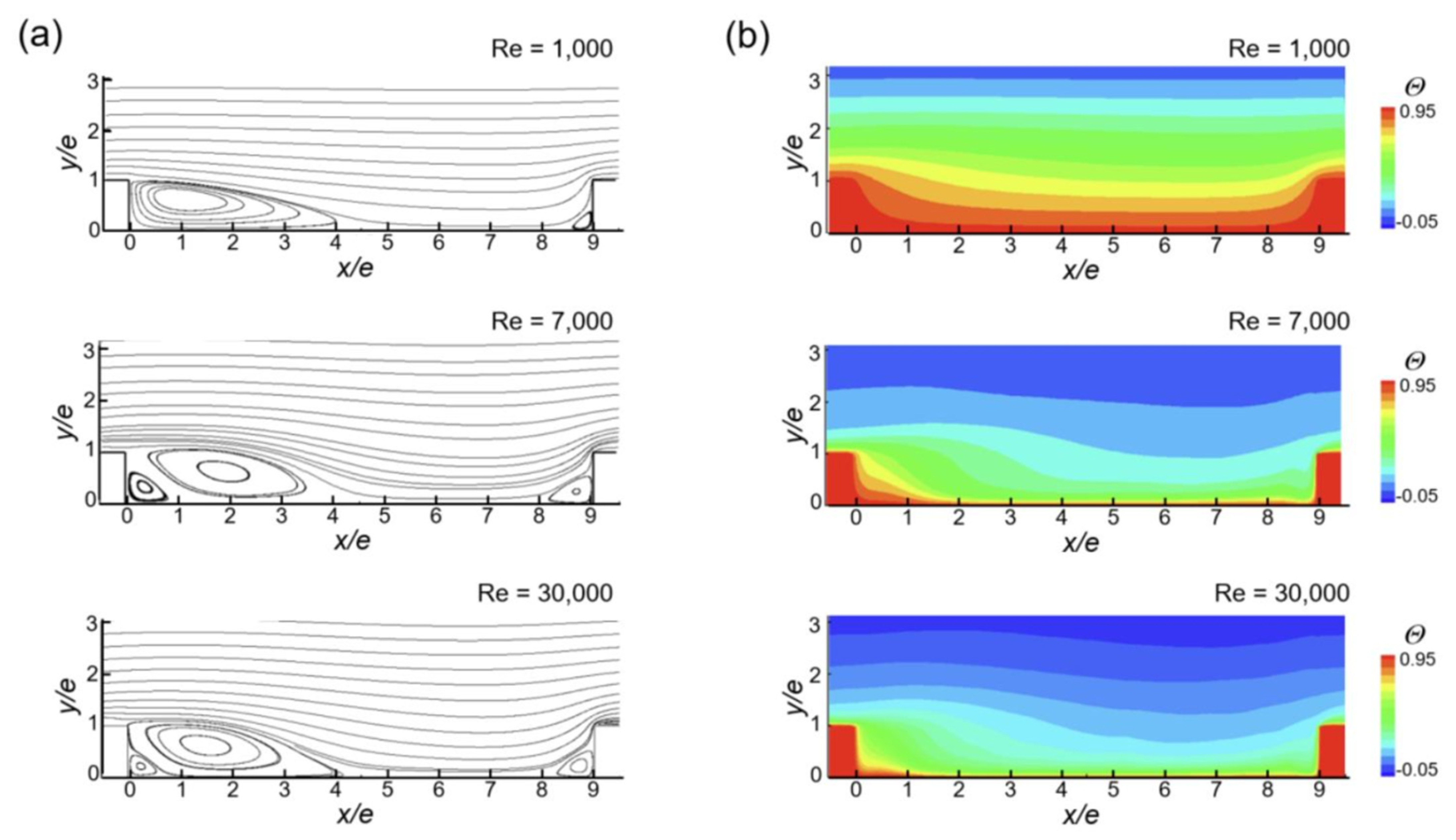 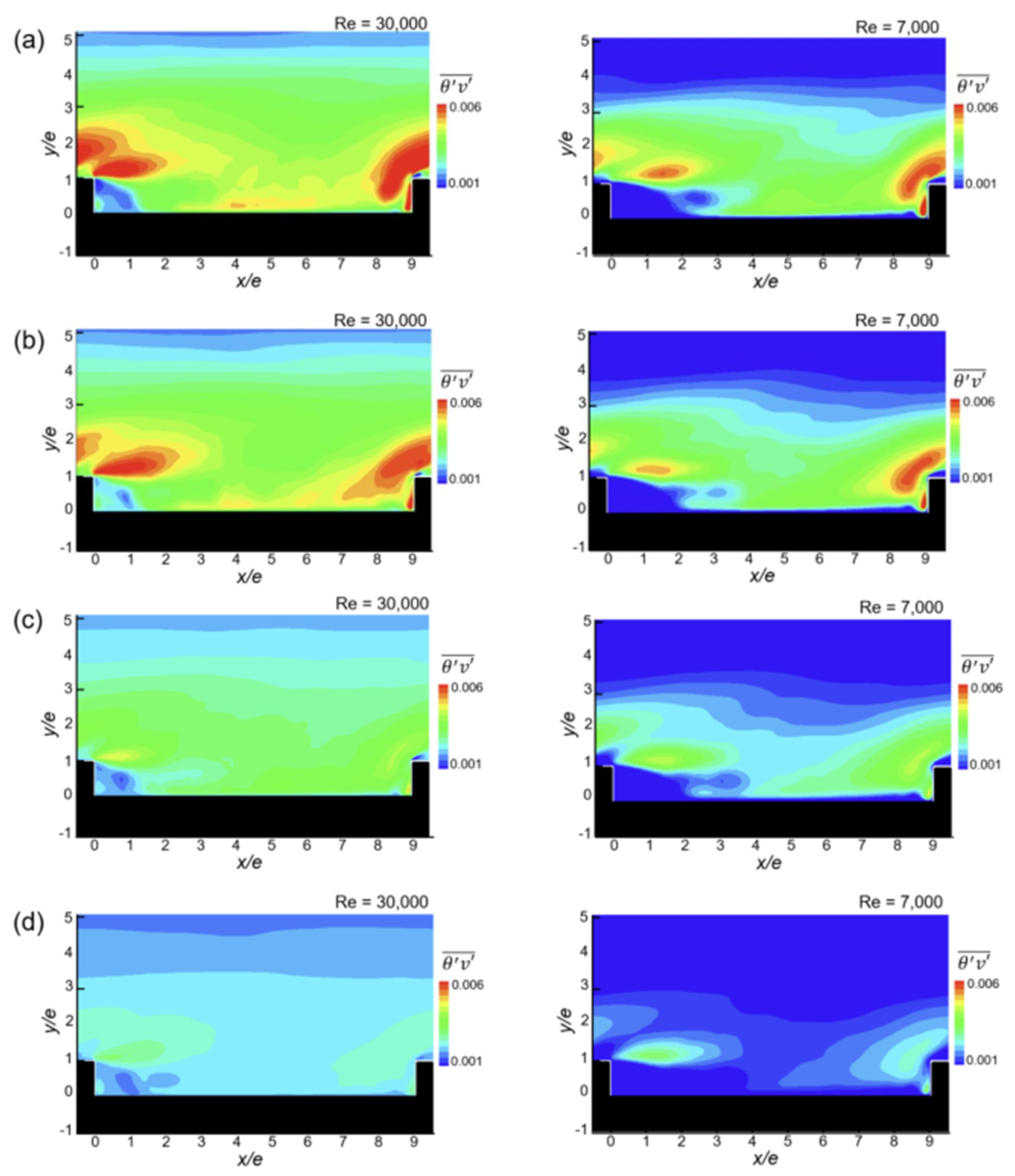