This paper reports a theoretical study on the magnetohydrodynamic flow and heat exchange of carbon nanotubes (CNTs)-based nanoliquid over a variable thicker surface. Two types of carbon nanotubes (CNTs) are accounted for saturation in base fluid. Particularly, the single-walled and multi-walled carbon nanotubes, best known as SWCNTs and MWCNTs, are used. Kerosene oil is taken as the base fluid for the suspension of nanoparticles. The model involves the impact of the thermal radiation and induced magnetic field. However, a tiny Reynolds number is assumed to ignore the magnetic induction. The system of nonlinear equations is obtained by reasonably adjusted transformations. The analytic solution is obtained by utilizing a notable procedure called optimal homotopy analysis technique (O-HAM). The impact of prominent parameters, such as the magnetic field parameter, Brownian diffusion, Thermophoresis, and others, on the dimensionless velocity field and thermal distribution is reported graphically. A comprehensive discussion is given after each graph that summarizes the influence of the respective parameters on the flow profiles. The behavior of the friction coefficient and the rate of heat transfer (Nusselt number) at the surface (y = 0) are given at the end of the text in tabular form. Some existing solutions of the specific cases have been checked as the special case of the solution acquired here. The results indicate that MWCNTs cause enhancement in the velocity field compared with SWCNTs when there is an increment in nanoparticle volume fraction. Furthermore, the temperature profile rises with an increment in radiation estimator for both SWCNT and MWCNT and, finally, the heat transfer rate lessens for increments in the magnetic parameter for both types of nanotubes. View Full-Text
Keywords: kerosene oil-based fluid; stagnation point; carbon nanotubes; variable thicker surface; thermal radiation kerosene oil-based fluid; stagnation point; carbon nanotubes; variable thicker surface; thermal radiation
►▼ Show Figures 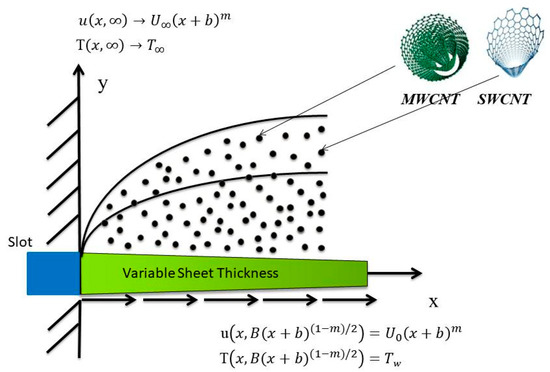