SLIM1 Transcription Factor Promotes Sulfate Uptake and Distribution to Shoot, Along with Phytochelatin Accumulation, Under Cadmium Stress in Arabidopsis thaliana

Trace metals (TM) contamination is a severe problem in the environment and produced an adverse effect on the productivity of crops. Cadmium (Cd) is a TM ranked seven among the top 20 pollutants due to its high toxicity and solubility in water, taken up by the plants and affects their growth and metabolism. In this study, we evaluated the growth, Cd accumulation and tolerance capacities of three chickpea (Cicer arietinum L.) cultivars (NC234 (NC2), ICCV89310 (IC8) and ICCV89323-B (IC8-B)), subjected to two Cd concentrations (25 and 50 µM) in hydroponic culture. The toxicity of Cd reduced the plant height and fresh and dry biomass in all cultivars. The maximum reduction was observed at 50 µM of Cd. Compared with IC8-B, cultivars IC8 and NC2 exhibited better performance with high growth, biomass, root to shoot (R/S) ratio and water content under high Cd stress. To measure the accumulation of Cd in root and shoot, an inductively coupled plasma optical emission spectrometer (ICP-OES) was used. IC8 and NC2 had comparatively high Cd tolerance and accumulation ability (> 100 µg g−1 dry weight), with IC8 being more tolerant and accumulated higher Cd in shoot than NC2, while cultivar IC8-B was sensitive. Root accumulated more Cd than shoot in a dose-dependent manner. The bioconcentration factors (BCF) and bioaccumulation coefficients (BAC) were far higher than one (> 1) and increased with an increase in Cd concentrations, while the translocation factor (TF) was less than one (< 1), suggesting that all the three cultivars were unable to transfer Cd from the root to the shoot efficiently. Our results indicated that IC8 and NC2 proved to be resistant, while IC8-B showed sensitivity when exposed to high Cd stress (50 µM). View Full-Text
Keywords: chickpea; cadmium; ICP-OES; growth; physiological responses; tolerance chickpea; cadmium; ICP-OES; growth; physiological responses; tolerance
►▼ Show Figures 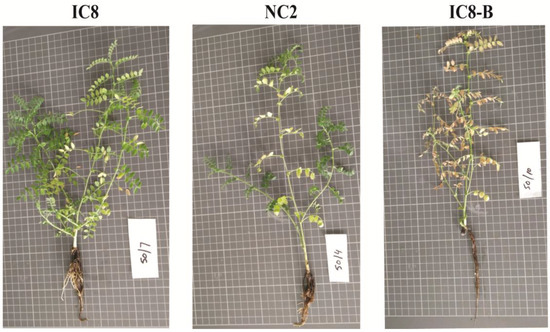