SLIM1 Transcription Factor Promotes Sulfate Uptake and Distribution to Shoot, Along with Phytochelatin Accumulation, Under Cadmium Stress in Arabidopsis thaliana

Sulfur (S) assimilation, which is initiated by sulfate uptake, generates cysteine, the substrate for glutathione (GSH) and phytochelatin (PC) synthesis. GSH and PC contribute to cadmium (Cd) detoxification by capturing it for sequestration. Although Cd exposure is known to induce the expression of S-assimilating enzyme genes, including sulfate transporters (SULTRs), mechanisms of their transcriptional regulation are not well understood. Transcription factor SLIM1 controls transcriptional changes during S deficiency (−S) in Arabidopsis thaliana. We examined the potential involvement of SLIM1 in inducing the S assimilation pathway and PC accumulation. Cd treatment reduced the shoot fresh weight in the sulfur limitation1 (slim1) mutant but not in the parental line (1;2PGN). Cd-induced increases of sulfate uptake and SULTR1;2 expressions were diminished in the slim1 mutant, suggesting that SLIM1 is involved in inducing sulfate uptake during Cd exposure. The GSH and PC levels were lower in slim1 than in the parental line, indicating that SLIM1 was required for increasing PC during Cd treatment. Hence, SLIM1 indirectly contributes to Cd tolerance of plants by inducing −S responses in the cell caused by depleting the GSH pool, which is consumed by enhanced PC synthesis and sequestration to the vacuole. View Full-Text
Keywords: Cadmium stress; Arabidopsis thaliana; sulfate transport; SLIM1 transcription factor; phytochelatin Cadmium stress; Arabidopsis thaliana; sulfate transport; SLIM1 transcription factor; phytochelatin
►▼ Show Figures 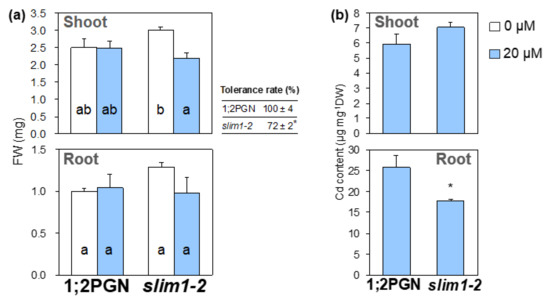