This study was undertaken to evaluate the nutraceutical potential of the Mela Rosa dei Monti Sibillini (MR), an ancient apple variety of the Sibillini Mountains, central Italy. The chemical profile of the apple’s polyphenolic-rich extract (MRE) obtained from first- and second-choice samples using the Amberlite® XAD7HP resin was analyzed by High Performance Liquid Chromatography with Diode-Array and Mass spectrometry (HPLC-DAD-MS) and 21 phytochemicals were quali–quantitatively determined. For comparative purposes, the polyphenol-rich extract of Annurca (ANE), a southern Italian variety, was analyzed. The antioxidant capacity of MREs was evaluated by Folin–Ciocalteu, 1, 1-diphenyl-2-picrylhydrazyl (DPPH), and 2, 2′-azino-bis (3-ethylbenzothiazoline-6-sulphonic acid) (ABTS) assays. The inhibitory capacity of MREs for the enzymes α-glucosidase, lipase, monoamine oxidase A, tyrosinase, and acetylcholinesterase was also determined. The MREs showed higher polyphenolic and triterpene profiles than the ANE. Their radical scavenging activity was higher than that of ANE and comparable to the reference trolox. The MRE from the second-choice apples displayed higher contents of the 21 phytochemicals investigated. Either MRE from second-choice or first-choice samples showed enzymatic inhibition with IC50 values higher than those of reference inhibitors but worthy of nutraceutical consideration. Taken together, these results show the potential of MRE as a source of bioactive compounds to be used for pharmaceutical, nutraceutical, and cosmeceutical applications has been confirmed. View Full-Text
Keywords: apple polyphenol-rich extract; HPLC; antioxidant; enzyme inhibition; functional foods apple polyphenol-rich extract; HPLC; antioxidant; enzyme inhibition; functional foods
►▼ Show Figures 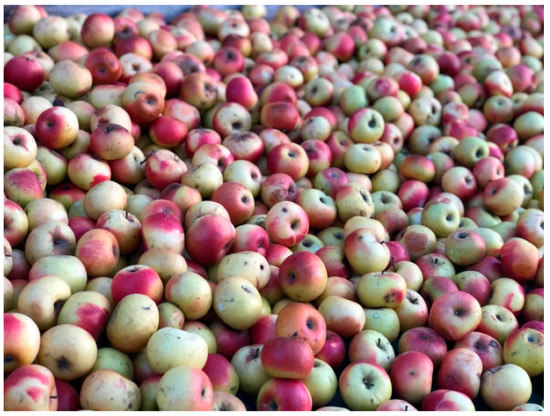