Recent in vivo assays of the responses of Rubisco to temperature in C3 plants have revealed substantial diversity. Three cultivars of soybean (Glycine max L. Merr.), Holt, Fiskeby V, and Spencer, were grown in indoor chambers at 15, 20, and 25 °C. Leaf photosynthesis was measured over the range of 15 to 30 °C, deliberately avoiding higher temperatures which may cause deactivation of Rubisco, in order to test for differences in temperature responses of photosynthesis, and to investigate in vivo Rubisco kinetic characteristics responsible for any differences observed. The three cultivars differed in the optimum temperature for photosynthesis (from 15 to 30 °C) at 400 μmol mol−1 external CO2 concentration when grown at 15 °C, and in the shapes of the response curves when grown at 25 °C. The apparent activation energy of the maximum carboxylation rate of Rubisco differed substantially between cultivars at all growth temperatures, as well as changing with growth temperature in two of the cultivars. The activation energy ranged from 58 to 84 kJ mol−1, compared with the value of 64 kJ mol−1 used in many photosynthesis models. Much less variation in temperature responses occurred in photosynthesis measured at nearly saturating CO2 levels, suggesting more diversity in Rubisco than in electron transport thermal properties among these soybean cultivars. View Full-Text
Keywords: photosynthesis; Rubisco; temperature; acclimation; soybean photosynthesis; Rubisco; temperature; acclimation; soybean
►▼ Show Figures 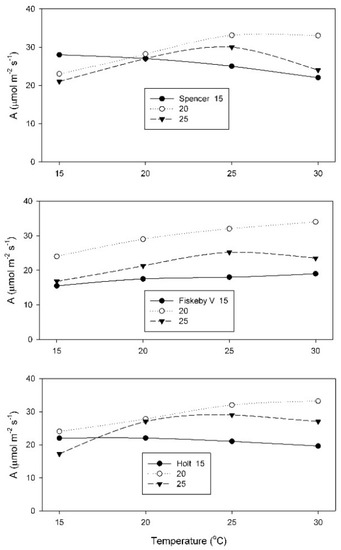