Metabolomic Profiling of Soybeans (Glycine max L.) Reveals the Importance of Sugar and Nitrogen Metabolism under Drought and Heat Stress

Soybean is an important crop that is continually threatened by abiotic stresses, especially drought and heat stress. At molecular levels, reduced yields due to drought and heat stress can be seen as a result of alterations in metabolic homeostasis of vegetative tissues. At present an incomplete understanding of abiotic stress-associated metabolism and identification of associated metabolites remains a major gap in soybean stress research. A study with a goal to profile leaf metabolites under control conditions (28/24 °C), drought [28/24 °C, 10% volumetric water content (VWC)], and heat stress (43/35 °C) was conducted in a controlled environment. Analyses of non-targeted metabolomic data showed that in response to drought and heat stress, key metabolites (carbohydrates, amino acids, lipids, cofactors, nucleotides, peptides and secondary metabolites) were differentially accumulated in soybean leaves. The metabolites for various cellular processes, such as glycolysis, the tricarboxylic acid (TCA) cycle, the pentose phosphate pathway, and starch biosynthesis, that regulate carbohydrate metabolism, amino acid metabolism, peptide metabolism, and purine and pyrimidine biosynthesis, were found to be affected by drought as well as heat stress. Computationally based regulatory networks predicted additional compounds that address the possibility of other metabolites and metabolic pathways that could also be important for soybean under drought and heat stress conditions. Metabolomic profiling demonstrated that in soybeans, keeping up with sugar and nitrogen metabolism is of prime significance, along with phytochemical metabolism under drought and heat stress conditions. View Full-Text
Keywords: crop yield; drought stress; heat stress; metabolomic profiling; phytochemicals; soybean crop yield; drought stress; heat stress; metabolomic profiling; phytochemicals; soybean
►▼ Show Figures 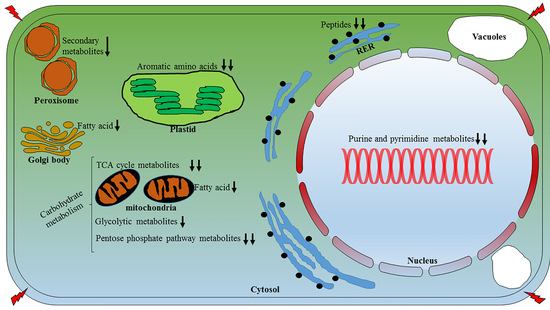