Combination of Aerial, Satellite, and UAV Photogrammetry for Mapping the Diachronic Coastline Evolution: The Case of Lefkada Island
Next Article in Special Issue

The Spill Over of Crime from Urban Centers: An Account of the Changing Spatial Distribution of Violent Crime in Guyana

Burglary data, including the residential and commercial burglaries, were provided by the city’s police department. They were retrieved from the city’s 110-reporting system, a major source of official crimes in China. We used four years of burglary data from 1 January 2012 to 31 December 2015 to minimize the influence of annual fluctuations and get reliable risk estimates for neighborhoods. During the period, 8589 burglaries were recorded. The reported burglary incidents were aggregated to neighborhoods. The neighborhoods range in total burglaries from one to 1457; the mean is 75.34 and the standard deviation is 148.74. We took these burglary data as dependent variables.

Two common but predominant theories related to the geography of crime are the social disorganization theory [29] and the routine activity theory [30]. The first theory indicates that crime is strongly related to social disorganization, and characteristics of a neighborhood, including demographic, economic, and other factors, can account for variations in crime [31]. Low socioeconomic status can disrupt social control, which in turn can increase crime rates [32]. The second theory associates occurrence of a crime with people’s daily activities [30]. This theory highlights that the convergence of motivated offenders and suitable targets in situations where capable guardians are absent is a prerequisite for a crime to occur [33]. The routine activity and social disorganization theories are frequently used in spatial analysis of crime [5]. Thus, based on these two theories, a list of seven variables representing neighborhood characteristics were considered to be potential risk factors.
Population density referred to the resident population of each neighborhood divided by its area in square kilometers. We included this variable to allow for differences in population and neighborhood size. The variable has been used in previous studies of crime [34,35]. Young males was measured by the percentage of men aged 15–24. Age and gender are factors often related to offenders and victims [12,36]. Researchers have discovered that criminal behaviors are overrepresented in young males [37]. The population density and percentage of young males are two demographic variables.
High education was the percentage of residents with a high school degree or more over 20 years of age. Unemployment was the percentage of unemployed people aged 18–60 in labor force. These two variables are often selected and used as indicators of neighborhood socioeconomic status [2,5,15].
Bar density was the quantity of bars per 10,000 residents. The presence of particular land use has long been of interest to researchers [38]. Past studies have examined the effects of bars [39] and alcohol outlets [40] on crime. In the current research, apart from bars, we also explored the influence of department stores on variations of urban crime.
Policing was the sum of police rooms and monitoring rooms per 10,000 population. The local police station sets up and maintains these rooms to preserve the public safety and provide services for residents. A police room is usually staffed by several policemen. Policing should prevent crime and enhance the perception of safety. However, a greater policing existence might be a response to higher crime areas. Its relationship with crime has been investigated in previous research [16,34].
We used these seven variables as potential risk factors. Multi-collinearity should be diagnosed before running regressions. As can be seen from the correlation matrix (Table 1), the absolute value of the correlation coefficient between population density and unemployment was largest, reaching 0.42. This indicates that the correlation between this variable pair was moderate according to Evans [41]. The rest values imply a weak or very weak correlation. Besides, the determinant of the matrix was 0.44, not close to 0, suggesting collinearity is not high [42]. As a consequence, we no longer consider the multi-collinearity problem.

The dependent variable was modeled as a random variable following a Poisson distribution: where represents counts of burglaries occurred in neighborhood i, signifies counts of burglaries expected, and denotes the relative burglary risk. To investigate the influence of independent variables and contextual effects, we decomposed the expectation of the Poisson distribution by a log—link function: where is an offset term, is the intercept, , , represent observations of independent variables, , , are regression coefficients. and are two random effects terms, one unstructured and the other structured, to capture overdispersion and spatial autocorrelation at the neighborhood level, respectively. represents the sub-district neighborhood i falling within. refers to the unstructured contextual effects term not accounting for spatial autocorrelation at the sub-district level. measures the spatially-correlated contextual effects that take into account spatial autocorrelation at the sub-district level.
The form of the commonly used conventional Bayesian spatial model is:
This model does not account for the contextual effects as it only contains and . Our contextual effects model extends the conventional model by including another two random effects terms.

The Bayesian modeling approach uses the Bayes theorem to combine data and prior distributions to obtain posterior distributions of parameters. Thus, the priors specified for model parameters are import in Bayesian modeling. We chose a uniform prior dflat() for the intercept term [43]. As to the regression coefficients, we specified a vague normal distribution in the absence of a clear knowledge about the impacts of independent variables [11]. A vague prior provides little information, allowing the data to speak for themselves and dominate posterior distributions [44]. and were assigned a normal distribution with mean both zero and variance , respectively. Priors for and were determined by an intrinsic conditional autoregressive (ICAR) distribution that has been adopted extensively in Bayesian spatial data analysis [45]. Specifically, all the model parameters were specified as follows: where (M) denotes counts of neighborhoods (sub-districts). is the spatial adjacency matrix of neighborhoods with size , where if neighborhoods i and j are adjoining and , otherwise. is the spatial adjacency matrix of sub-districts defined in the same way as . and are the variance parameters of the ICAR distribution.
As for ICAR, it specifies that the structured random effects term given is normally distributed: where represents the number of the neighbors of neighborhood i. To be specific, the mean and variance of given are and , respectively. The same principle applies to .
With regard to hyperparameters , , and , the precision parameters of the four were determined through the commonly used vague Gamma hyperprior distribution [46]:
An analysis with a uniform prior dunif(0,100) for the standard deviation parameters of the random effects terms was undertaken to assess the sensitivity of choice for hyperparameters [47].

To fully demonstrate the contextual model (Equation (2)), we also fitted the commonly used conventional Bayesian spatial model (Equation (3)) by the MCMC method in WinBUGS 1.4.3 and contrasted their results.
Independent variables are often measured on different scales. These scale differences may bring computational problems within sampling algorithms. To speed convergence, independent variables were standardized in advance before models were fitted [48].
Both models were run with three chains. We assessed the convergence by checking the history plot and the Gelman-Rubin statistic plot [49]. After convergence, each chain was run further to produce samples used for posterior inference.

The deviance information criterion (DIC) [50] was adopted to evaluate the performance of the contextual effects and the conventional Bayesian spatial models. It is defined as: where and are the posterior mean deviance and the number of effective model parameters, respectively.
As a Bayesian measure of model adequacy, DIC balances model fit (measured by ) and model complexity (represented by ) [50]. Low-value DICs indicate better-fitted models.

4.1. Deviance Summaries of the Models

4.4. Identifying and Mapping the Relative Contribution

The authors greatly appreciate the valuable comments from anonymous reviewers. 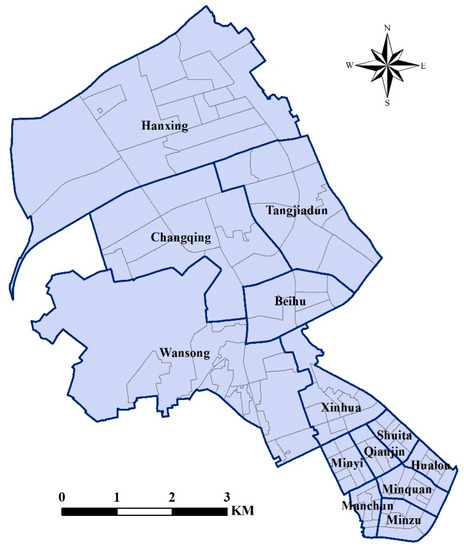 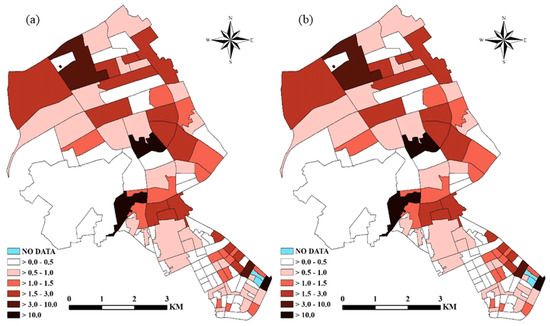 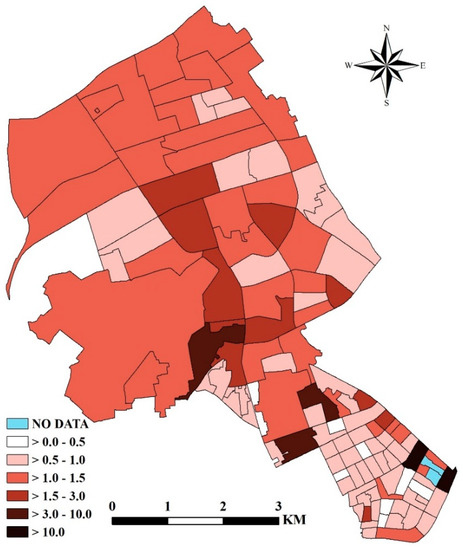 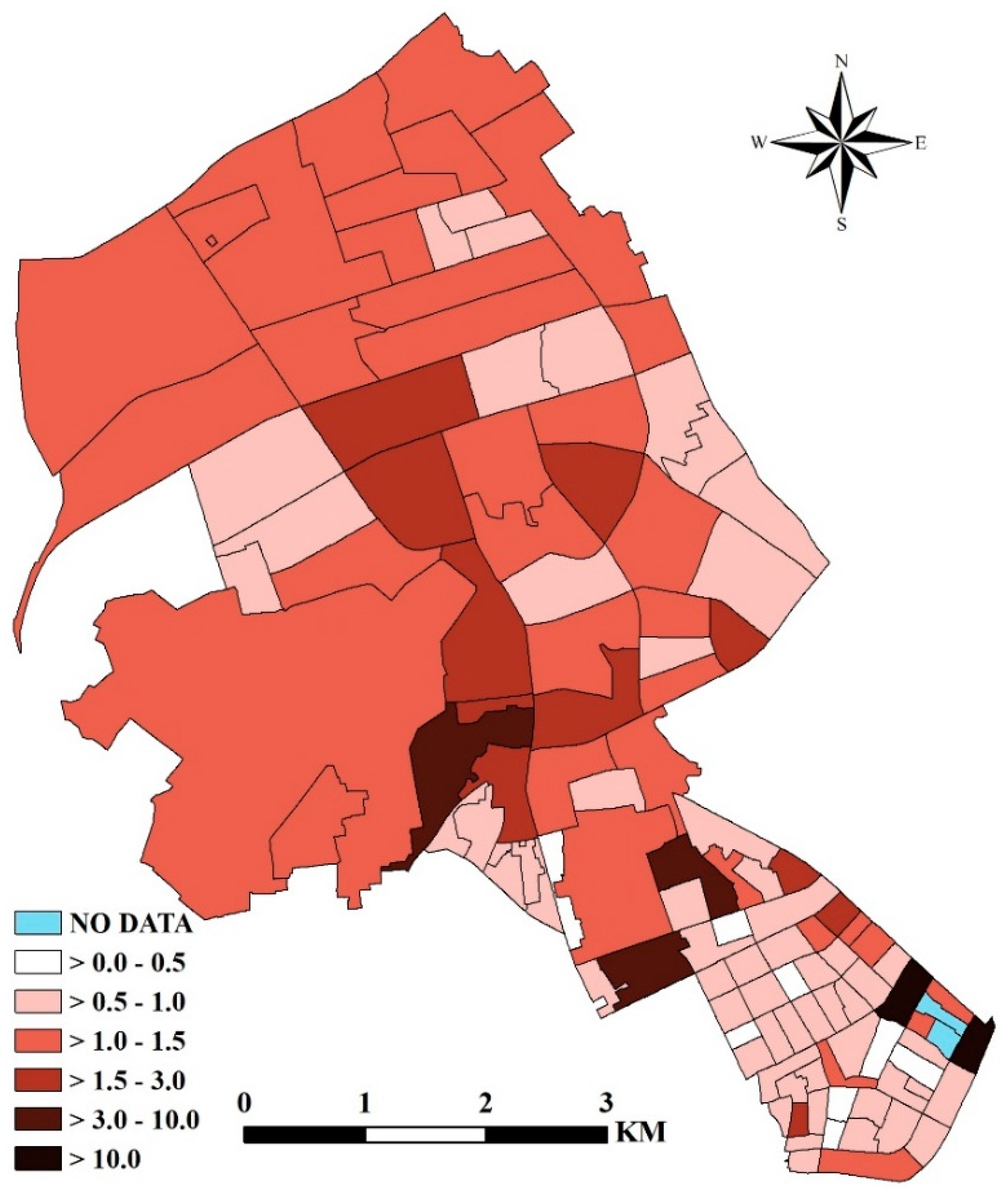 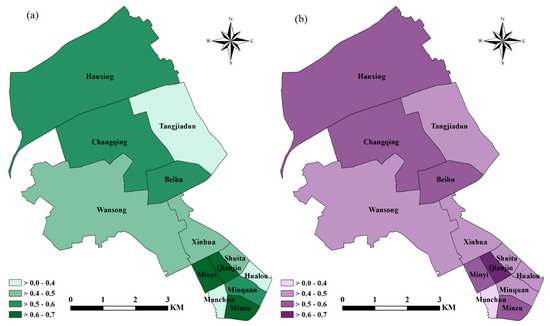