Research on journey-to-crime distance has revealed the importance of both the characteristics of the offender as well as those of target communities. However, the effect of the home community has so far been ignored. Besides, almost all journey-to-crime studies were done in Western societies, and little is known about how the distinct features of communities in major Chinese cities shape residential burglars’ travel patterns. To fill this gap, we apply a cross-classified multilevel regression model on data of 3763 burglary trips in ZG City, one of the bustling metropolises in China. This allows us to gain insight into how residential burglars’ journey-to-crime distances are shaped by their individual-level characteristics as well as those of their home and target communities. Results show that the characteristics of the home community have larger effects than those of target communities, while individual-level features are most influential. Older burglars travel over longer distances to commit their burglaries than the younger ones. Offenders who commit their burglaries in groups tend to travel further than solo offenders. Burglars who live in communities with a higher average rent, a denser road network and a higher percentage of local residents commit their burglaries at shorter distances. Communities with a denser road network attract burglars from a longer distance, whereas those with a higher percentage of local residents attract them from shorter by. View Full-Text
Keywords: journey to crime; residential burglary; origin and destination effects; cross-classified multilevel model journey to crime; residential burglary; origin and destination effects; cross-classified multilevel model
►▼ Show Figures 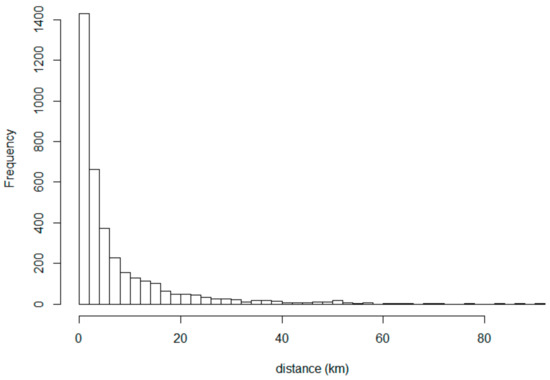