In Geographical Information Systems, geo-coding is used for the task of mapping from implicitly geo-referenced data to explicitly geo-referenced coordinates. At present, an enormous amount of implicitly geo-referenced information is hidden in unstructured text, e.g., Wikipedia, social data and news. Toponym recognition is the foundation of mining this useful geo-referenced information by identifying words as toponyms in text. In this paper, we propose an adapted toponym recognition approach based on deep belief network (DBN) by exploring two key issues: word representation and model interpretation. A Skip-Gram model is used in the word representation process to represent words with contextual information that are ignored by current word representation models. We then determine the core hyper-parameters of the DBN model by illustrating the relationship between the performance and the hyper-parameters, e.g., vector dimensionality, DBN structures and probability thresholds. The experiments evaluate the performance of the Skip-Gram model implemented by the Word2Vec open-source tool, determine stable hyper-parameters and compare our approach with a conditional random field (CRF) based approach. The experimental results show that the DBN model outperforms the CRF model with smaller corpus. When the corpus size is large enough, their statistical metrics become approaching. However, their recognition results express differences and complementarity on different kinds of toponyms. More importantly, combining their results can directly improve the performance of toponym recognition relative to their individual performances. It seems that the scale of the corpus has an obvious effect on the performance of toponym recognition. Generally, there is no adequate tagged corpus on specific toponym recognition tasks, especially in the era of Big Data. In conclusion, we believe that the DBN-based approach is a promising and powerful method to extract geo-referenced information from text in the future. View Full-Text
Keywords: place names; Deep Belief Networks; toponym recognition; geographic information retrieval; Chinese text place names; Deep Belief Networks; toponym recognition; geographic information retrieval; Chinese text
►▼ Show Figures 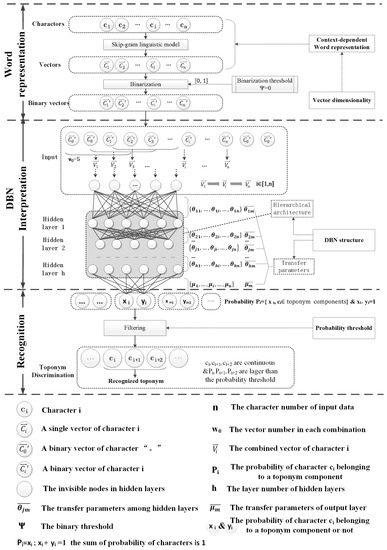