Effects of Synergistic Inhibition on α-glucosidase by Phytoalexins in Soybeans

Post-traumatic stress disorder (PTSD) develops in a portion of individuals exposed to extreme trauma. Glycosylation is a post-translational modification that affects protein functions and is altered in various pathophysiological states and aging. There are still no validated biomarkers of PTSD. The aim of this study was to evaluate the N-glycomic profile in 543 male Caucasian individuals (299 veterans with PTSD and 244 control subjects). The study included discovery (N = 233) and replication (N = 310) cohort. Hydrophilic interaction HPLC and ultra-performance liquid chromatography were used to separate and detect 39 plasma and 24 IgG N-glycan species, respectively. All results were corrected for the effects of age and multiple testing. Significant results included only significantly altered N-glycans in cases/controls in both cohorts, in the same direction. Results showed that six plasma N-glycans (four increased and two decreased) were altered in PTSD vs. controls in both cohorts, but IgG N-glycans were similar between groups. The severity of PTSD was not associated with different plasma N-glycans. This is the first study detecting alterations in plasma N-glycans in PTSD. These N-glycans are also associated with other neuropsychiatric disorders and inflammation, suggesting possible shared glycosylation mechanisms. View Full-Text
Keywords: biomarkers; Caucasians; immunoglobulin G; male subjects; N-glycans; plasma; PTSD; veterans biomarkers; Caucasians; immunoglobulin G; male subjects; N-glycans; plasma; PTSD; veterans
►▼ Show Figures 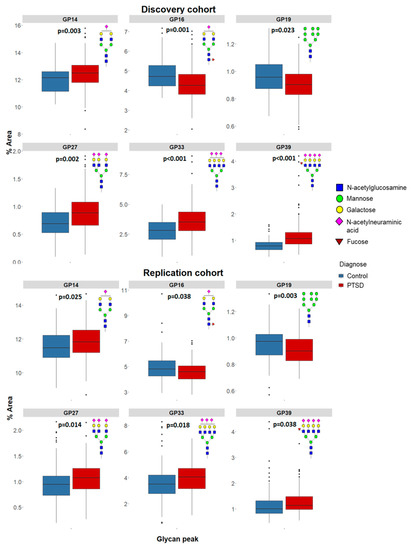