From Translation to Protein Degradation as Mechanisms for Regulating Biological Functions: A Review on the SLRP Family in Skeletal Tissues
Next Article in Special Issue

Metformin: The Answer to Cancer in a Flower? Current Knowledge and Future Prospects of Metformin as an Anti-Cancer Agent in Breast Cancer

Cancer remains one of the most feared and dreaded diseases in this era of modern medicine, claiming the lives of many, and affecting the quality of life of several others around the globe despite major advances in the diagnosis, treatment, palliative care and the immense resources invested into cancer research. While research in cancer has largely focused on the neoplasm/tumor and the cancerous cells that make up the tumor, more recently, the existence, proliferation, differentiation, migration and invasion of cancer stem cells (CSCs) and the role that CSCs play in tumor initiation, progression, metastasis, drug resistance and relapse/recurrence of the disease has gained widespread interest in cancer research. Although the conventional therapeutic approaches such as surgery, chemotherapy and radiation therapy are effective cancer treatments, very often these treatment modalities fail to target the CSCs, which then later become the source of disease recurrence. A majority of the anti-cancer agents target rapidly dividing cancer cells and normal cells and hence, have side effects that are not expected. Targeting CSCs remains a challenge due to their deviant nature with a low proliferation rate and increased drug resistance mechanism. Ascorbic acid/Vitamin C (Vit.C), a potent antioxidant, is a cofactor for several biosynthetic and gene regulatory enzymes and a vital contributor to immune defense of the body, and was found to be deficient in patients with advanced stages of cancer. Vit.C has gained importance in the treatment of cancer due to its ability to modulate the redox status of the cell and influence epigenetic modifications and significant roles in HIF1α signaling. Studies have reported that intravenous administration of Vit.C at pharmacological doses selectively kills tumor cells and targets CSCs when administered along with chemotherapeutic drugs. In the current article, we provide an in-depth review of how Vit.C plays an important role in targeting CSCs and its possible use as an adjuvant, neoadjuvant or co-treatment in the treatment of cancers. View Full-Text
Keywords: cancer stem cells; Vitamin C; ascorbic acid; cancer treatment; combination therapy; reactive oxygen species cancer stem cells; Vitamin C; ascorbic acid; cancer treatment; combination therapy; reactive oxygen species
►▼ Show Figures 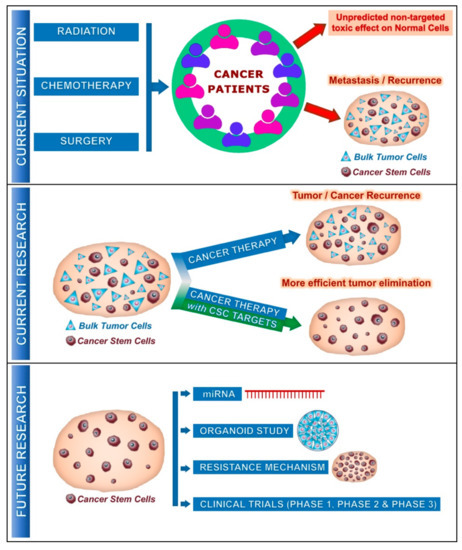