The Metabolome and Osteoarthritis: Possible Contributions to Symptoms and Pathology

Alteration of Metabolic Pathways in Osteoarthritis

Sir Archibald Edward Garrod, who pioneered the field of inborn errors of metabolism and first elucidated the biochemical basis of alkaptonuria over 100 years ago, suggested that inborn errors of metabolism were “merely extreme examples of variations of chemical behavior which are probably everywhere present in minor degrees, just as no two individuals of a species are absolutely identical in bodily structure neither are their chemical processes carried out on exactly the same lines”, and that this “chemical individuality [confers] predisposition to and immunities from various mishaps which are spoken of as diseases”. Indeed, with advances in analytical biochemistry, especially the development of metabolomics in the post-genomic era, emerging data have been demonstrating that the levels of many metabolites do show substantial interindividual variation, and some of which are likely to be associated with common diseases, such as osteoarthritis (OA). Much work has been reported in the literature on the metabolomics of OA in recent years. In this narrative review, we provided an overview of the identified alteration of metabolic pathways in OA and discussed the role of those identified metabolites and related pathways in OA diagnosis, prognosis, and treatment. View Full-Text
Keywords: osteoarthritis; metabolism; biomarkers; metabolomics osteoarthritis; metabolism; biomarkers; metabolomics
►▼ Show Figures 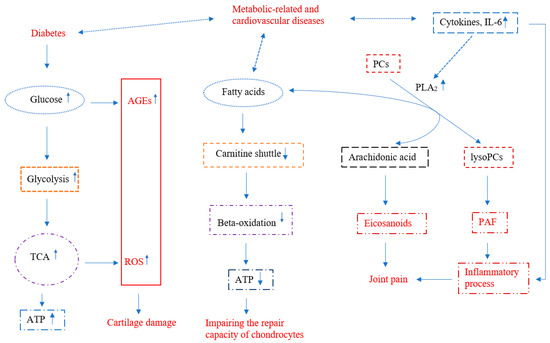