One of the main problems in the elderly population and for people with functional disabilities is falling when they are not supervised. Therefore, there is a need for monitoring systems with fall detection functionality. Mobile robots are a good solution for keeping the person in sight when compared to static-view sensors. Mobile-patrol robots can be used for a group of people and systems are less intrusive than ones based on mobile robots. In this paper, we propose a novel vision-based solution for fall detection based on a mobile-patrol robot that can correct its position in case of doubt. The overall approach can be formulated as an end-to-end solution based on two stages: person detection and fall classification. Deep learning-based computer vision is used for person detection and fall classification is done by using a learning-based Support Vector Machine (SVM) classifier. This approach mainly fulfills the following design requirements—simple to apply, adaptable, high performance, independent of person size, clothes, or the environment, low cost and real-time computing. Important to highlight is the ability to distinguish between a simple resting position and a real fall scene. One of the main contributions of this paper is the input feature vector to the SVM-based classifier. We evaluated the robustness of the approach using a realistic public dataset proposed in this paper called the Fallen Person Dataset (FPDS), with 2062 images and 1072 falls. The results obtained from different experiments indicate that the system has a high success rate in fall classification (precision of 100% and recall of 99.74%). Training the algorithm using our Fallen Person Dataset (FPDS) and testing it with other datasets showed that the algorithm is independent of the camera setup. View Full-Text
Keywords: assistive robot; fall detection; lying-pose recognition; deep learning; mobile robot; convolutional neural network; support vector machine assistive robot; fall detection; lying-pose recognition; deep learning; mobile robot; convolutional neural network; support vector machine
►▼ Show Figures 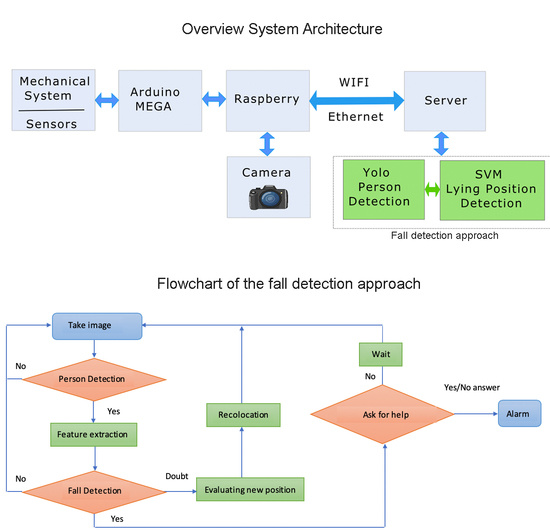