When the targets are illuminated by a radar wave, field energy is scattered along all directions. The distribution of energy in space can be represented by the radar cross section (RCS). RCS is a physical quantity that measures the ability of targets to scatter radar waves. The equations of conventional RCS can be obtained as: where is the scattered field at radar antenna from targets, is the target incident field and represents the distance from targets to the radar antenna. The conventional definition of RCS characterizes the scattered intensity of a target after it has been irradiated by radar waves. It should be noted that such a concept is only efficient in single radar radiation.
When the conductor is irradiated by multiple incident waves or equipped with active equipment, the surface current of the conductor changes dramatically [20]. This change leads to the variation of electromagnetic scattering characteristics of the conductor. In this case, the traditional definition is no longer applicable. As shown in Figure 1a, the target is illuminated by radar signals and multiple incident waves. It can be observed from Figure 1b that the target is radiated by radar signals and the antenna. The echo signals are generated by the combined effect of radar, multiple radiators and antennas. In this circumstance, the field energy distribution can be named as ARCS.
The definition of ARCS can be written as where is the total scattering field which can be received by radar system antennas and it can be expressed as where is the scattering field caused by multiple radiators and antennas. The radar receiving antenna is affected by their joint action with the scattered echoes from the target.
From the above discussion, it can be seen that there is a significant difference in the scattering field between ARCS and RCS. RCS represents the scattering field generated by the radar system, while ARCS characterizes the scattering field generated by the radar system, active equipment and multiple radiators. The influencing factors of ARCS include not only the physical parameters of the target and the parameters of the radar, but also the parameters of multiple incident waves and active equipment.
One of the most important features between field and wave is the coherent interaction between them. The interference effects may occur in scattered fields caused by radars, multiple radiators and antennas. It will consequently lead to the increase or cancellation of the electric field. Supposing the phases of and are and respectively, the ARCS can be written as
Supposing is the RCS caused by cancellation signals. Therefore, can be given as
By analyzing (5), it can be known that the value of can be significantly reduced by adjusting the phase. Similar to monostatic RCS, the observation point with the same radar position can be called monostatic ARCS. When the observation point is different from the radar position, it can be regarded as bistatic ARCS. The ARCS concept can be used to achieve the cancellation of electromagnetic wave signals in certain directions and has the potential to be applied to target stealth.

The combined effect of radiated fields and radar waves from active devices on the target results in a diversity of scattered fields. To achieve the stealth of the target, the active echo cancellation simulation procedure of the target is designed and analyzed by ARCS theory. The effect of antenna parameters on the electromagnetic scattering characteristics can also be expressed by ARCS. All simulations are calculated by HFSS.
As shown in (2), the process of calculating ARCS requires the value of the total scattered field in space. In HFSS, the value of which represents the parameter of far field can be calculated, where is the distance from target to radar and is the total electric field at a distance of from radar. The total scattering field which can be received by radar system antennas can then be obtained as
Then the ARCS can be written as
The simulation procedure of evaluating active echo cancellation by ARCS concept through HFSS can be divided in five steps, as shown in Figure 2.
Simulations were designed to validate the active echo cancellation using the ARCS concept. We built a model of an aircraft with a dual antenna structure and added plane wave excitation to the aircraft in the head-on direction. The active echo cancellation is achieved by using the antenna to transmit an electromagnetic wave signal and adjusting the amplitude and phase of the signal emitted by the antenna. We then calculate its monostatic ARCS by HFSS simulation. More details are presented in Section 3. 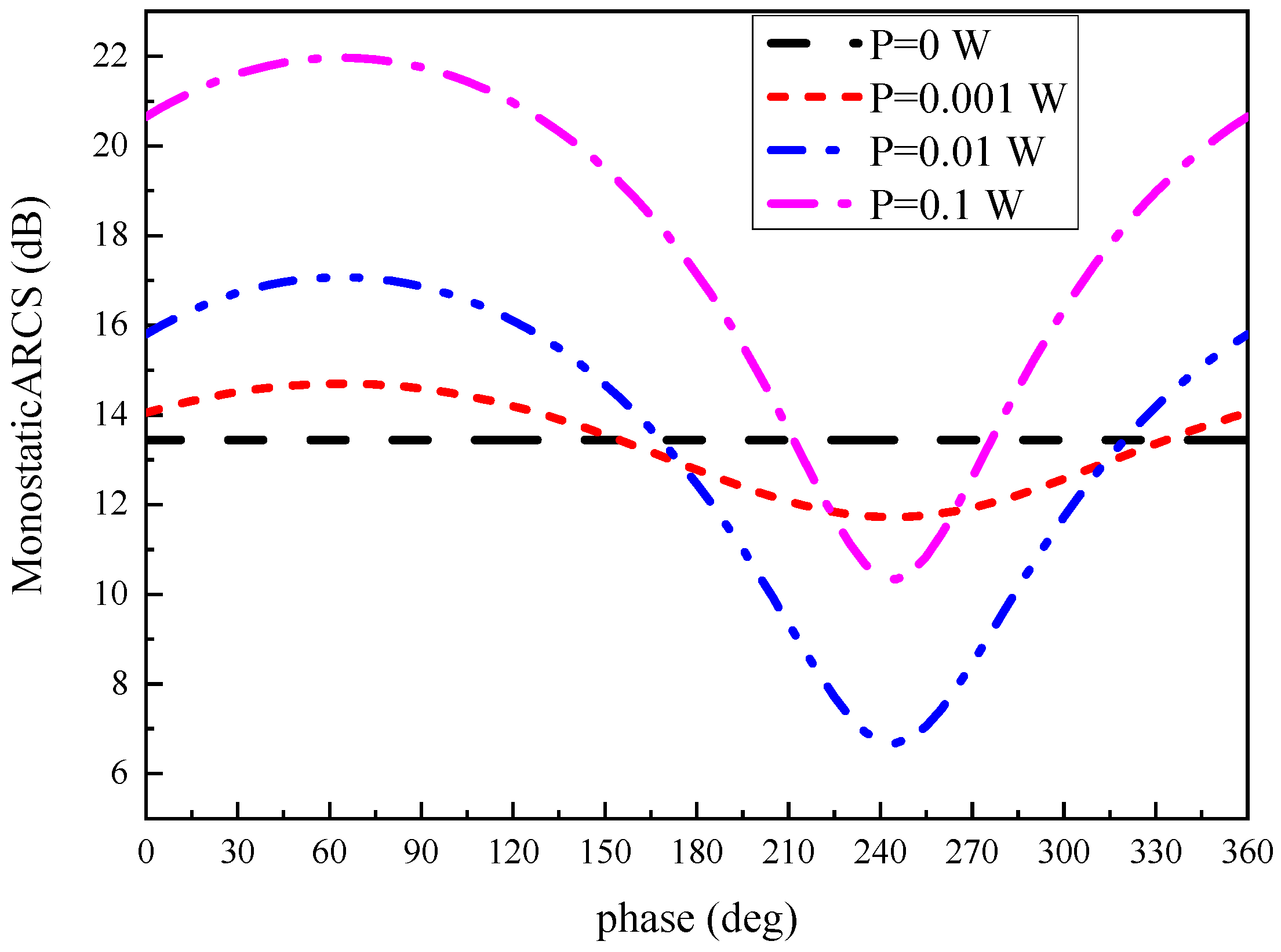 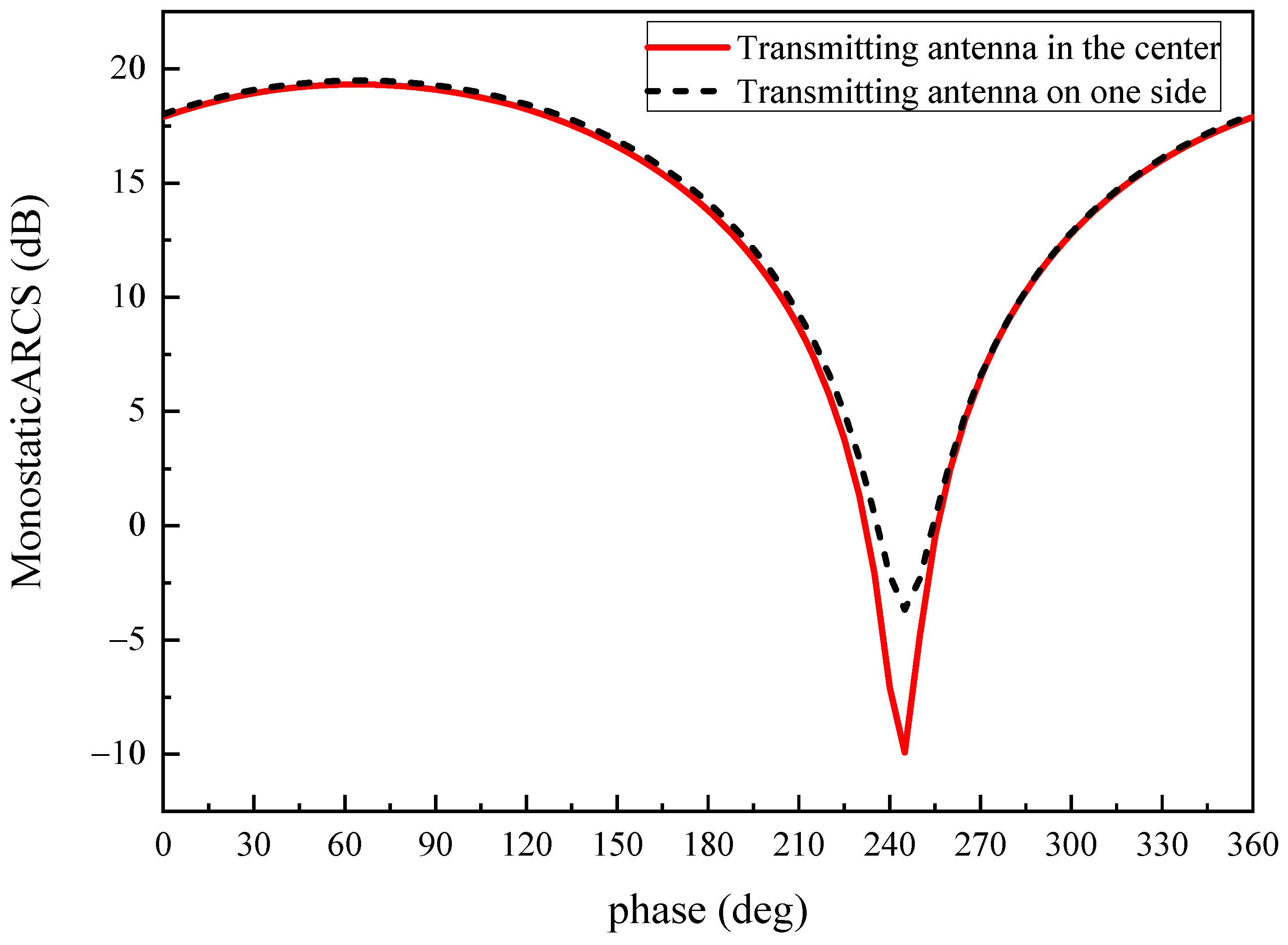 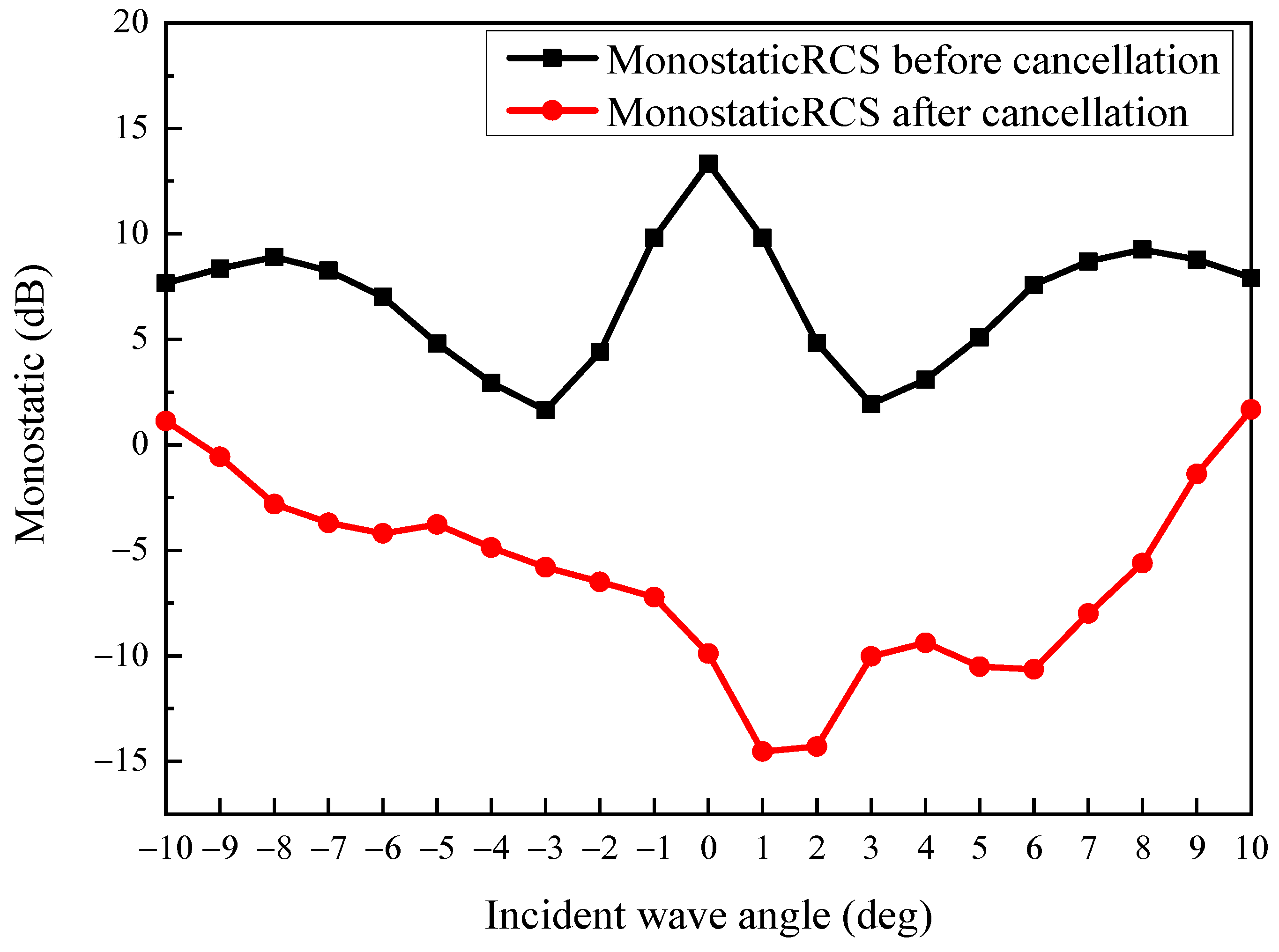