Biocomposite Materials Based on Chitosan and Lignin: Preparation and Characterization
Previous Article in Journal

Smart and Sustainable Hair Products Based on Chitin-Derived Compounds

According to previous research studies, consumers worldwide are searching for new natural-oriented hair products that are both skin and environmentally friendly. Worldwide waste and air pollution, with the consequent environmental disasters, represent the greatest risk to human health and economy, further increased by the COVID-19 pandemic. Among others, non-biodegradable molecules are present in hair products (fossil-based additives, surfactants, etc.) and macromolecules (plastics). Plastics waste is considered the most serious problem, representing a forecast amount of 460 million tons per year by 2030, 12% of which is reused or recycled. Most plastics consumed, therefore, go to landfills and incineration, also if their recycling is considered an important driver of industrial profitability. Thus, the use of biopolymers represents an interesting alternative to produce biodegradable goods and tissues. After an introduction to the worldwide waste problem and the hair structure, the present review proposes the possibility to make biodegradable tissues that, realized by chitin nanofibrils and nano-lignin as natural polymers, may be used to produce an innovative and smart cosmetic hairline. Chitin-derived compounds are considered interesting polymers to produce non-woven tissues able to repair the hair damages provoked by the aggressiveness of both the environment and some aggressive cosmetic treatments, such as setting, bleaching, permanent waving, and oxidative coloring. The possible activity, that positively charged polymers such as chitin could have, has been speculated, interfering with the constitution and organization of the hair fibrils’ structure, which is negatively charged. The possibility of selecting biopolymers for their packaging is also discussed. Moreover, the use of these biopolymers, obtained from forestry-agro-food waste, may be of help to safeguard the further consumption of natural raw materials, necessary for future generations, also maintaining the earth’s biodiversity. View Full-Text
Keywords: chitin nanofibril; nano-lignin; waste; plastics; cosmetics; hair; non-woven tissue; natural fiber chitin nanofibril; nano-lignin; waste; plastics; cosmetics; hair; non-woven tissue; natural fiber
►▼ Show Figures 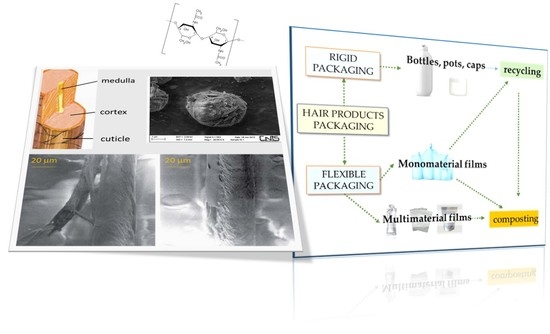