Broussonetia papyrifera Promotes Hair Growth Through the Regulation of β-Catenin and STAT6 Target Proteins: A Phototrichogram Analysis of Clinical Samples

Broussonetia papyrifera (B.papyrifera), belonging to the Moraceae family, is known to elicit anti-inflammatory, antioxidant, anti-tyrosinase, anticancer, antinociceptive, and antimicrobial effects. The present study has been designed to examine the effects of B. papyrifera extract on hair growth through in vitro and clinical samples. Real-time cell growth assay, T-cell factor/lymphoid enhancer-binding factor (TCF/LEF), activation of signal transducer and activator of transcription-6(STAT6) and STAT3 reporter gene function, and Western blotting was performed to examine whether B. papyrifera regulates the expression of target proteins implicated in the proliferation of human hair follicle dermal papilla (hHFDP) cells. In this human trial, using a phototrichogram, the effect of B. papyrifera on hair growth was examined by reconstitution analysis after shaving the hair of the clinical subject’s dorsal skin. B. papyrifera promoted growth equally in hHFDP cells, which is comparable to that of minoxidil and tofacitinib. Treatment with B. papyrifera extract enhanced the TCF/LEF-luciferase activity and increased the level of β-catenin protein. Moreover, B. papyrifera extract significantly suppressed interleukin-4 (IL4)-induced STAT6 phosphorylation. In clinical trial, using a phototrichogram, we assessed the hair density and total hair counts at 0, 6, and 12 weeks after the use of hair tonic containing B. papyrifera extract. After using the hair tonic for 12 weeks, the total hair count was significantly increased as compared with the subjects at the start date (n = 11). B. papyrifera promotes dermal papilla cells proliferation in vitro and clinically among human volunteers through the regulation of WNT-β-catenin and STAT6 pathways.
Keywords: Broussonetia papyrifera; hair growth; WNT-β-catenin; JAK3-STAT6; clinical; phototrichogram Broussonetia papyrifera; hair growth; WNT-β-catenin; JAK3-STAT6; clinical; phototrichogram

Hair loss imposes a significant psychosocial impact on one’s quality of life. Diverse etiological factors can lead to progressive hair loss. These include, but are not limited to, genetic predisposition, use of certain medications (e.g., chemotherapy and radiotherapy), hormonal imbalances, stress, and exposure to environmental pollutants. With competitive and stressful living conditions and increasing exposure to environmental toxicants, there has been a steady rise in the incidence of hair loss in both male and female subjects, who gradually withdraw themselves from social interactions and suffer from psychological distresses [1]. Although a few therapeutic interventions are currently available for clinical use to prevent hair loss, there have been limitations of these therapies [1]. For alopecia patients, surgical methods and drugs therapies are usually used. For surgical treatment, the hair follicles are transplanted directly [2,3], whereas the 5-alpha reductase inhibitor (e.g., finasteride) or peripheral vasodialator (e.g., minoxidil) is used as hair growth promoting medications clinically [4]. However, these medications have potential side effects associated with their effectiveness [5]. Finasteride has been reported to cause erectile dysfunction, and to increase the chances of self-harm and depression. Minoxidil has been reported to have side effects which include rash and dermatitis-like reactions. Therefore, although currently available medications improve hair growth, they reduce quality of life [4,6,7]. Thus, there is a need for research focusing on understanding the mechanisms underlying hair loss, potential strategies to improve hair growth, and development of an effective therapy.
There are a bounty of natural products which have traditionally been used for hair growth in many societies for centuries, but the use of these products has not been scientifically validated. Thus, it would be important to search for clinically effective hair growth promoting medications from natural sources. In fact, a wide spectrum of research has focused on the development of bioactive natural compounds as effective hair tonics [8,9,10,11]. Until recently, substantial progress has been made to elucidate the intracellular signaling pathways involved in hair loss process, especially those linked with alteration in the cell cycle of dermal papillae cells. Multiple signal transduction molecules, including WNT-β-catenin, Janus-activated kinase (JAK), and signal transducer and activator of transcription (STAT), contribute to the anagen initiation of multipotent epithelial stem cells. Studies have shown that activation of these signal molecules promoted the cell cycle of hair follicles [12,13,14,15]. Thus, a rational approach is to find natural products that could modulate one or more of the cell signaling molecules, thereby promoting hair growth. In this study, we tested the effects of the extract of B. papyrifera (family, Moraceae) on the growth regulation of human hair follicle dermal papillae (hHFDP) cells, as well as the effect of a hair tonic containing B. papyrifera extract on hair growth in clinical subjects. B. papyrifera extract is traditionally used for herbal medicine. In previous study results, B. papyrifera has demonstrated anti-inflammatory [16,17], antioxidant [18], antityrosinase [19], anticancer [20], antinociceptive [21], and antimicrobial effects [22]. Our study demonstrated that B. papyrifera extract treatment regulated WNT/β-catenin and IL-4 / STAT6 signaling pathways in hHFDP cells and stimulated hair growth in clinical subjects.

The xCELLigence System (ACEA Biosciences, San Diego, California, USA) uses an electronic cell sensor array technology that enables real-time monitoring of cell proliferation and cytotoxicity. A cell index (CI) value, determined by electrode impedance, provides an account of the cellular status including the number and viability. We performed real-time cell analysis following the procedure described by Y.E.Kim et al. [23]. In brief, cell culture medium was maintained at room temperature and an aliquot of 150 μl of media was added into each well of E-plate 8 of the xCELLigence system, and then to obtain a basal electrical impedance, placed in a cell culture incubator with E-plate 8 and the proper electrical contact to measure the background impedance for 24 hours. In order to determine the optimum cell concentration, the hHFDP cells (20,000 cells/well) were suspended in cell culture medium (50 μl) and added to each well (containing 150 μl medium) on E-plate 8. After 24 h, B. papyrifera (0–20 μg/ml) was suspended in 200 μl of cell culture medium and added to designate E-plate wells, and cells were monitored every 15 minutes for 72 hours. The electrical impedance CI was measured using the RTCA integrated software of the xCELLigence system.

A CellTiter-Glo® Luminescent Cell Viability Assay Kit was used to evaluate cell proliferation and cytotoxicity (Promega, Madison, WI, USA). Briefly, hHFDP cells were seeded in 96-well plate (7000 cells/well) and after 24 h, cells were treated to B. papyrifera extract (0~20 μg/ml) in serum free medium for 72 h. CellTiter-Glo174 reagent was added in the same amount as the culture medium, and reacted at room temperature for 10 minutes. The amount of ATP was measured with a LuBi luminance meter (Micro Digital Ltd., Seoul, South Korea).

The NIH3T3 cells stably transformed with TCF/LEF-luciferase constructor or HEK293 cells stable transformed with STAT3-luciferase constructs were seeded separately at 2 × 104 cells in 96-well plates and maintained in DMEM media containing puromycin (3 mg/ml) and 5% FBS for 24 h. Then, the NIH3T3 (TCF/LEF) cells were cultured for 24 hours by treating WNT3a as a positive control or B. papyrifera (1 to 40 μg/ml) as a test group. The HEK293 (STAT3-luc) cells were treated with IL-6 (10 ng) and B. papyrifera (140 μg/ml) concentrations for 24 hours. The Ba/F3 cells stably transfected with STAT6-reporter (Luc) were seeded at 2 × 104 cells in each well of a 96-well plate in DMEM containing 5% FBS for 24 h. Cells were treated with IL-4 (10 ng) and B. papyrifera (1–40 μg/ml) and incubated for 24 hours. To measure luciferase activity, 5x passive lysis buffer was added to each well and reacted for 10 minutes on an orbital shaker. The luciferase activity of TCF/LEF, STAT6, and STAT3 was measured using a LuBi microplate luminometer (Micro Digital Ltd.). All experiments were repeated three times and presented with the average and standard deviation.

After the hHFDP cells were incubated in the presence or absence of B. papyrifera extract (0~40 μg/ml) for 48 h, cells were lysed by incubating on ice with a RIPA buffer (125 mM Tris pH 7.6, 750 mM NaCl, 5% NP-40, 5% sodium deoxycholate, and 0.5% SDS, protease inhibitor) for 2 h. The same amount of protein (20 μg) was separated from an 8% or 10% polyacrylamide gel and transferred to a polyvinylidene difluoride (PVDF) membrane (Thermo Scientific, Pittsburgh, PA, USA). The membrane was blocked by incubating with 5% (w/v) non-fat dried milk in Tris-buffered saline Tween-20 (TBST: 10mM Tris (pH 7.4) and 150 mM NaCl solution containing 0.05% Tween-20) for 1 h at room temperature, followed by hybridization using specific primary antibodies. The blot was washed with TBST, and then hybridized with horseradish peroxidase (HRP)-conjugated secondary antibody. The resulting image was observed using an enhanced chemiluminescence Western blotting detection system. (myECL imager, Thermo Scientific, Pittsburgh, PA, USA).

The subjects were healthy Korean males and females (n = 11), and the age ranged from 21 to 53 years. These volunteers were selected according to the basic and specific (BASP) classification [24,25]. Subjects included subjects diagnosed with M2, C2, and U1 ranges above the basic type and with specific types V1 and F1 ranges according to the BASP classification. The scalp tonic study was approved by the Regional Review Board (IRB) on 10 June 2019. The scalp tonic was tested twice in the morning and evening for 12 weeks. We reviewed the product usage schedule maintained by each participant and monitored each participant’s product usage and compliance by weighing the returned the test product, at the 6- and 12-week visits.

A hair photographic device (SnT Lab, Seoul) was used to capture the head image of all participants with a fixed distance, angle, and lighting constant. Clinical images were collected at 6 and 12 weeks after treatment with the test product at baseline, and full comparative evaluations were performed by blind investigators, who evaluated the clinical images on a 7-point scale (−3, marked decrease; −2, intermediate decrease; −1, slightly decrease; 0, no change; +1, slightly increase; +2, intermediate increase; and +3, marked increase). To measure the number of hairs, the evaluation area was designated as 1 cm2, and after about 2 mm hairs were cut, red spots were marked on the hair loss area (vertex or forehead hairline). To determine the number of hairs, an optical trigram system (Folliscope ver 2.8, Lead M, Seoul, Korea) was used, and the total number of hairs was counted at 6 and 12 weeks after treatment with a hair tonic. The total number of hairs was counted within 1 cm2 area [26].

Data measured from subjects are presented as the mean ± SD of the difference between the values observed at baseline and those obtained after using the scalp tonic. All statistical analyses were done through the SPSS® package program (SPSS Inc, Chicago, IL, U.S.A.). Statistical analysis of changes in hair density was performed using ANOVA (p < 0.05) and analysis of the total number of hairs was determined using a paired t-test. The p < 0.05 is an important change.

3.1. The Effects of B. papyrifera on the Growth of Hair Follicle Dermal Papilla Cells

3.2. Effects of B. Papyrifera on the Reporter Gene Activity of Tcf/Lef, stat3 and stat6 in hHFDP Cell

3.3. Effects of B. Papyrifera on Phosphorylation of β-Catenin and stat6 in hHFDP Cells.

3.4 Effects of Scalp Tonic Enriched With B. papyrifera in Human Subjects

Background information of the Subjects:

A total of 15 subjects participated in the test group, however, four subjects were excluded in the middle of the clinical trial. Finally, the clinical trial was completed with 11 subjects. The test group was comprised of both male and female subjects (male/female = 2:9) with the mean age 43.4 ± 9.25 years. The demographic characteristics of the subjects are summarized in Table 1. There were no statistically significant differences between the 11 subjects who participated in the test group.

This research was financially supported by the Ministry of Trade, Industry and Energy (MOTIE, P0006061) and the Korea Institute for Advancement of Technology (KIAT) through the Promoting Regional specialized Industry

The authors declare no potential conflicts of interest. 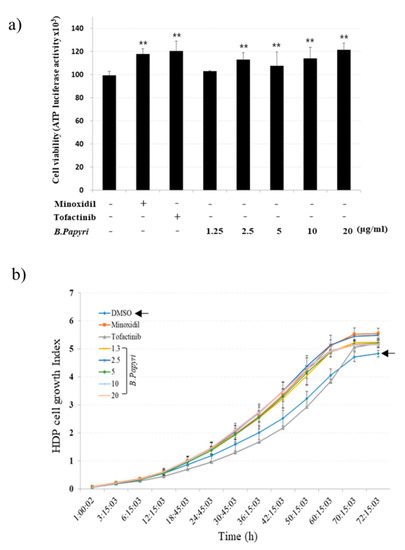 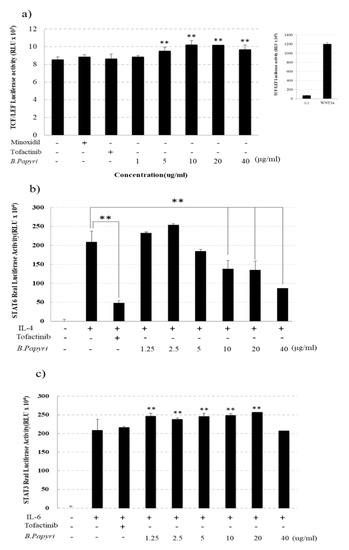 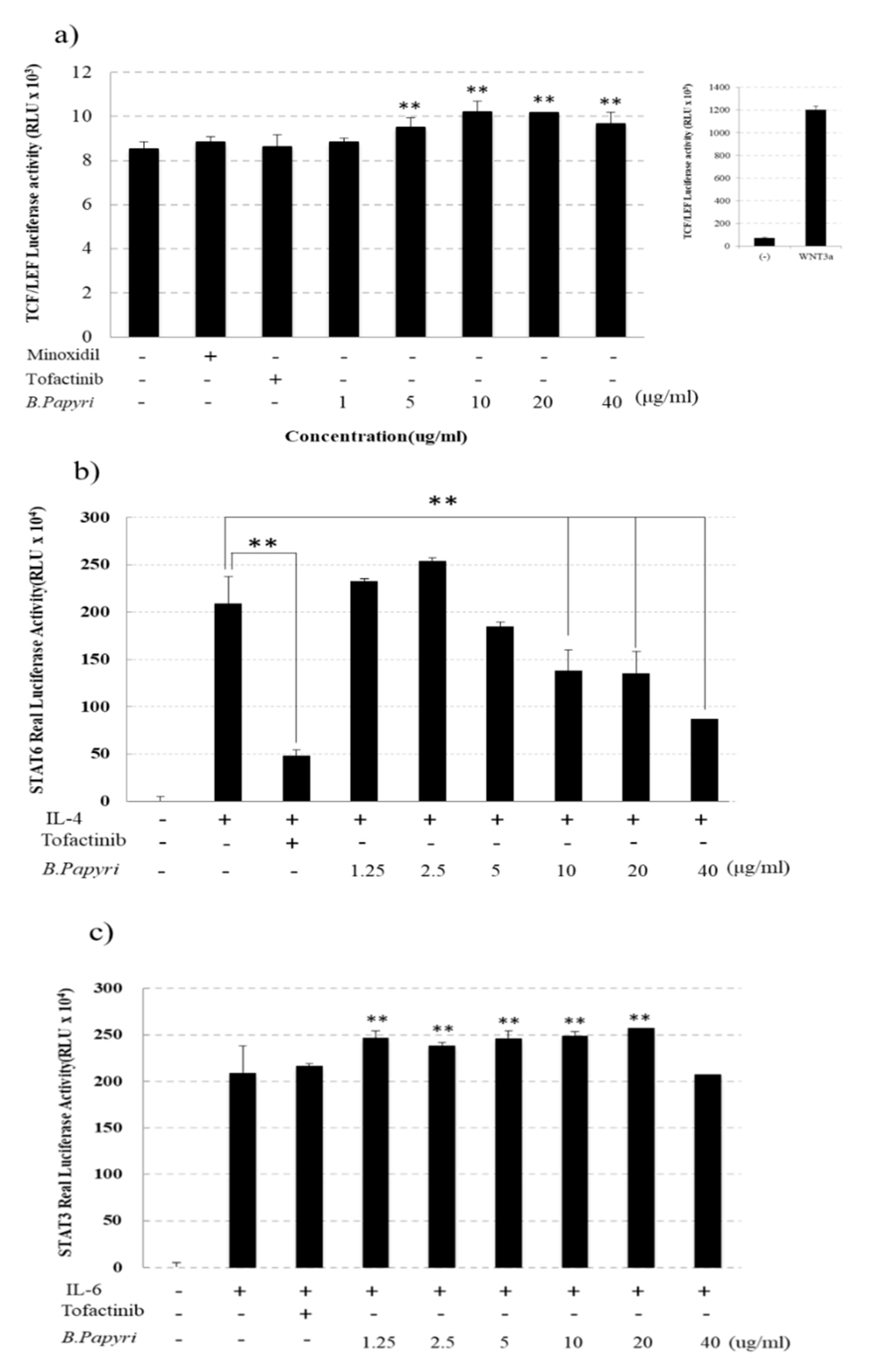 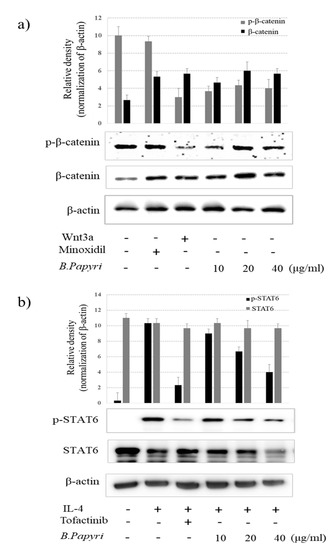 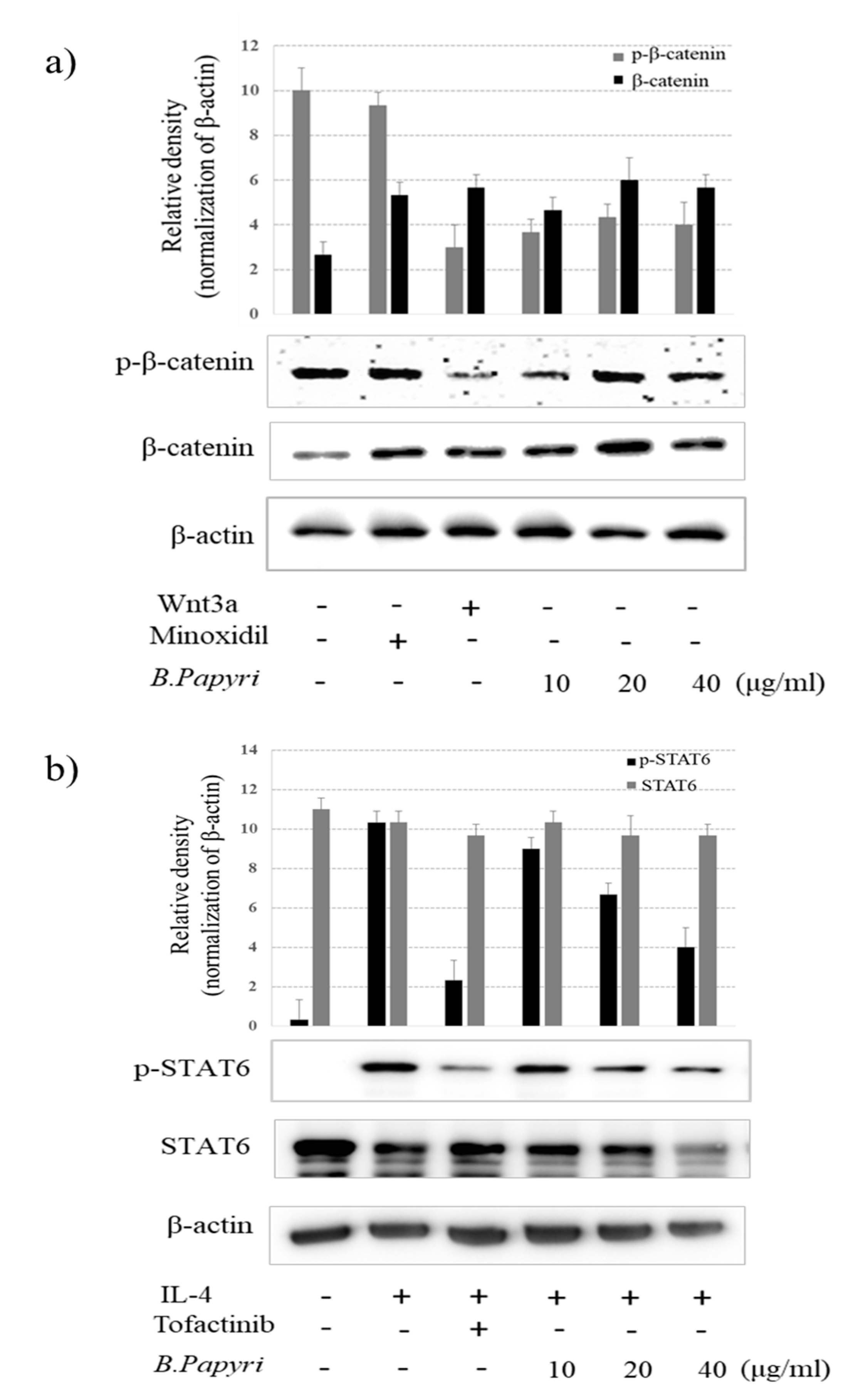 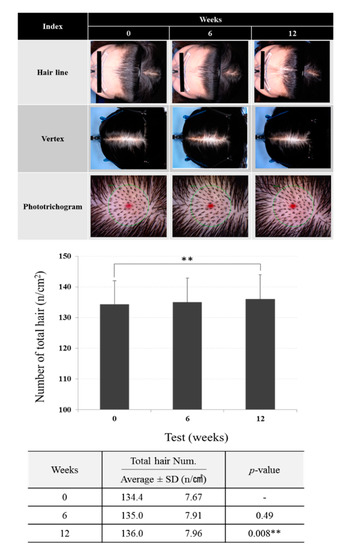 Table 1. Demographic characteristics of the subjects.
Table 1. Demographic characteristics of the subjects.
© 2020 by the authors. Licensee MDPI, Basel, Switzerland. This article is an open access article distributed under the terms and conditions of the Creative Commons Attribution (CC BY) license (http://creativecommons.org/licenses/by/4.0/).
We use cookies on our website to ensure you get the best experience. Read more about our cookies here.
Accept
We have just recently launched a new version of our website. Help us to further improve by taking part in this short 5 minute survey here. here.
Never show this again