From the identification of Δ9-tetrahydrocannabinol (Δ9-THC; Figure 1) in the cannabis plant as a bioactive ingredient of psychological activity and the chemical synthesis of its analogues [1], cannabinoid research paved the way to the discovery of the endocannabinoid system (ECS). Along with the endogenous cannabinoid receptor ligands (endocannabinoids), the endocannabinoid system (ECS) consists of cannabinoid receptors and enzymes responsible for the production and degradation of endocannabinoids [2]. Recently, intracellular transport and uptake of endocannabinoids have also been reported as having modulatory activity on ECS tones, which has emerged as a new potential target for ECS activity modulation [3]. Among the diverse endocannabinoids, AEA (anandamide [N-arachidonoylethanolamine]) and 2-AG (2-arachidonoylglycerol) were the first molecules identified, followed by the further identification of a family of N-acyl-ethanolamides (NAEs) and monoacylglycerols (MAGs), respectively (Figure 1) [4]. Two different cannabinoid receptors, cannabinoid receptor-1 (CB1R) and cannabinoid receptor-2 (CB2R), have been identified and cloned from mammalian tissue. Both receptors belong to the seven-transmembrane G-protein-coupled receptor (GPCR), coupled to Gi-Go heterotrimeric G proteins [5]. While CB1R is typically expressed in the central nervous system, including in the brain, the spinal cord, and in peripheral nerve terminals [6], it also exists in immune cells and skin as well [7]. While its exact roles and functions remain controversial, the expression of CB1R and CB2R in cultured keratinocytes and skin have been repeatedly reported [8]. Recently, two orphan-GPCRs, GPR55 and GPR119, have been suggested as cannabinoid receptors. AEA, palmitoylethanolamine (PEA), Virodhamine, and 2-arachidonylethanolamie (2-AG) is identified as binding to GPR55 and oleoylethanolmide (OEA) as a ligand for GPR119 [9], respectively. While the exact roles of these two receptors are not yet clarified, potential involvement in carcinogenesis was previously reported for GPR55 [10,11]. Recent studies using functional metagenomics for gut microbiome resulted in an identification of unique proteins from commensal bacteria, mediating the production of N-acyl-3-hydroxypalmitoyl-glycine (NAHPG). It was postulated that NAHPG can bind to GPR132 and that it mediates the potential effects of gut microbiome on inflammation and immune function. Considering the abundance of skin microbiome and the expression of CB receptors in skin, it might be also postulated that cannabinoid signaling might be involved between the cross-talk of skin microbiome and skin homeostasis [12].

As a Gi-coupled GPCR, the binding of an agonistic ligand on a cannabinoid receptor (CBR) inhibits receptor-coupled adenylyl cyclase activity and the cyclic AMP (cAMP) cascade, followed by the stimulation of mitogen-activated protein kinase (MAPK) activity and consequent secondary signaling. Considering the mechanism of Gi protein, the binding of an antagonistic ligand alone is not able to induce secondary cellular signaling. However, changes in cellular environments, such as the availability of the G proteins subunits, may result in the binding of different types of G proteins, such as Gs or G1/11, which could have implications for different types of signaling (reviewed in reference [13]. One type of cellular signaling induced by cannabinoid receptor activation is the stimulation of de novo ceramide synthesis. Pharmacological effects of cannabinoids include immunosuppressive and anti-inflammatory activities against various immune-mediated diseases such as diabetes, allergic asthma, and atopic dermatitis. Among the several proposed modes of action, cannabinoids-induced apoptosis in immune cells through the ceramide signaling was proposed [14]. Previously, increased synthesis of ceramide by activation of serine palmitoyltransferase (SPT), an enzyme responsible for the rate-limiting step of de novo ceramide synthesis, was reported in glioma cells [15], and induction of ceramide synthase (CerS) was also observed in endocannabinoid-analogue treated cells [16]. While there is no report about the direct effects of endocannabinoid on ceramide synthesis in epidermal keratinocyte, a recent study using Echinacea-derived alkylamides, which are putative CB2R ligands [17], showed that topical application of Echinacea-derived alkylamides not only improves atopic eczema symptoms, but also increases overall epidermal lipids contents. This includes epidermal ceramide EOS (esterified ω-hydroxy acyl-sphingosine), which is considered to be one of the most important ceramide subtypes for the epidermal permeability barrier’s function as structural components for stratum corneum intercellular lipids [18]. In addition to the crucial structural roles, increased ceramide can also induce the expression of anti-microbial peptides in epidermis through endoplasmic reticulum-mediated signaling, and further help to improve skin barrier functions, in terms of antimicrobial barriers [19] (Figure 2).
In addition to the expression of both receptors, the whole biochemical machinery of ECS, including cellular transport and intracellular uptake, synthesizing, and metabolizing endocannabinoids, was also identified in keratinocytes [8], which suggests that ECS plays important physiological and pathological roles in skin. Accordingly, modulation of CBR activity in skin can be induced not only by the direct binding of ligand molecules, but also by the indirect change of endocannabinoid levels through the modulation of biochemical machinery. For example, stimulation of N-acylphosphatidylethanolamines (NAPEs)-hydrolyzing phospholipase D (PLD) activity, which catalyzes the cellular synthesis of AEA, stimulation of cellular uptake of AEA by a specific AEA membrane transporter (AMT), or inhibition of AEA-hydrolyzing enzyme fatty acid amide hydrolase (FAAH), can indirectly activate CBRs and further induce cellular responses. This kind of indirect activation of CBRs through the modulation of related enzymes or transporter activity is called an “entourage effect” [20]. While the “entourage effect” was first used for describing the modulating effects of fatty acid glycerol esters on 2-AG activity on CB receptors, it was then expanded to explain the biological activity of entourage compounds’ ability to interfere with the degradation of biologically active (target receptor binding) compounds, or to increase the affinity of active compounds on the target receptor [21]. This indirect modulation of CBRs underlies, at least in part, the mode of action for the current use of palmitoylethanolamine (PEA) as a topical anti-inflammatory and anti-pruritic ingredient [22,23]. It can be also suggested that, even with a CBR agonist with lower efficacy, a combination of FAAH inhibitors or other entourage compounds can provide sufficient therapeutic efficacy [24].

Among the diverse biological effects of CBR agonists in skin, the inhibition of epidermal keratinocyte proliferation, stimulation of epidermal keratinocytes differentiation, and anti-inflammatory activity suggest potential therapeutic applications for inflammatory skin diseases, including allergic contact dermatitis [25], atopic dermatitis [26], and psoriasis [27,28]. As summarized in Table 1, in vivo studies using various animal models and clinical studies, anti-inflammatory activities, anti-pruritic activities, and effects on epidermal permeability barrier functions were also explained (reviewed in [29] and [30]). Recently, using a CB1R and CB2R knockout mice model, Roelandt et al. showed a contradictory role of CB1R and CB2R on skin barrier function. While the absence of CB1R negatively impacted the recovery of the epidermal permeability barrier function after acute disruption, the knockout (-/-) of CB2R accelerated recovery. Secretion of lamellar body and formation of stratum corneum intercellular lipid bilayer structures were altered accordingly [31]. In both the fluorescein isothiocyanate-induced Th2-type contact hypersensitivity model and the 2,4-dinitrofluorobenzene-induced contact hypersensitivity model, protective activity of CB1R on skin barrier disruption, as well as inflammation, was also reported [28,32]. In addition to epidermal keratinocytes, CBRs in the mast cell are also reported to be involved in the EEC system. Ligand activation of CB1R reduced both the degranulation of mast cells and the maturation of mast cells from the progenitor cells in situ, which suggested a potential application of CB1R stimulation for allergic and mast cell-dependent skin diseases [33]. Additional mechanisms related with ECS signaling include transient receptor potential vanilloid-1 (TRPV-1) and peroxisome proliferator-activated receptor (PPAR) [34]. While detailed explanation about the roles of these receptors in skin is beyond the scope of this review, anti-pruritic effects of TRPV-1 agonist and anti-inflammatory activities of PPAR agonist are potentially related with CBR signaling (Figure 2) [35,36].

4. Development of Endocannabinomimetics and its Cosmetic Application

Focusing on the expected potential benefits, the dermatological and cosmetic application of the topical cannabinoid receptor agonist have been repeatedly reported. The development of cosmetic ingredients requires not only sufficient efficacy, but also strict safety without local and systemic adverse effects. Hence, cannabinomimetics as cosmetic ingredients might be based on endocannabinoid-mimicking compounds, considering the potential undesirable psycho-activity possibly associated with phyto-cannabinoid mimetics. Most of the currently identified endocannabinoids consist of two functional chemical groups: long chain-fatty acids either in saturated or unsaturated form, and hydrophilic moieties, including ethanolamine, dopamine, and glycerol (Figure 1) [2]. Considering these two groups are commonly conjugated via an amide linkage-forming fatty acid amide compound, it can be hypothesized that the conjugation of amino acid as hydrophilic moiety into long chain-fatty acid might introduce CBR agonistic or antagonistic activity. Based on this hypothesis, previously we have reported the synthesis of a cannabinoid receptor agonist and its effects on skin barrier function. A series of fatty acid amide molecules were synthesized and their CBR modulating activity was screened. As a result, two compounds, α-oleoyl oleoylamine ethanolamine (α-OOE) and α-oleoyl oleoylamine serinol (α-OOS), were identified as having CB1R agonistic effects, while no effects were observed on CB2R. A series of in vitro studies showed that significant anti-inflammatory activities are exerted by these agonists, which were further confirmed by investigations using an oxazolone-induced atopic dermatitis model [39]. In addition to anti-inflammatory activity, an accelerated recovery of epidermal permeability barrier function after acute disruption was also observed, which suggests that a topical CBR agonist can improve skin barrier function as well [40]. Since the conjugation of serinol as a hydrophilic moiety can also incorporate CBR modulating activity into fatty acids, new fatty acid amide molecules conjugated with serinol were synthesized and their CBR agonistic activity was tested. As a result, N-palmitoyl serinol was identified as a CB1R agonistic ligand, whose binding activity was comparable to ACEA in the test system (Figure 3). Interestingly, increased endogenous ceramide concentration by N-palmitoyl serinol treatment and the consequent stimulation of the apoptosis signal was reported in neuroblastoma cells [48]. Clinical efficacy, as tested on small number of healthy volunteers, showed a slight reduction of trans-epidermal water loss (TEWL) and significant increases in skin hydration immediately after one application (Figure 3). These results suggest that endocannabinomimetics can be used for improving skin barrier functions, alleviating inflammatory responses, and relieving itching sensations, and can be a new candidate for new cosmeceutical ingredients for both sensitive and diseased skin.

While the cannabinoid-related studies are mostly focused on the modulation of neurological functions, the topical application of cannabinoids for local effects has also been receiving significant attention recently. The use of a phytocannabinoid, such as cannabidiol, is getting more popular in the cosmetic industry, and these are commonly labeled as hemp-containing products [49]. However, the use of phytocannabinoid might draw potential safety issues related to its impurities with psychoactivity or legal concerns in certain countries. Hence, the use of endocannabinoid or endocannabinomimetics directly modulating CBRs in skin, or the use of “entourage effects” ingredients which indirectly regulate the activity of endocannabinoids, can be a possible option. Development of endocannabinoidomimetics based on natural or unnatural amino acids as hydrophilic moiety and their practical application has been tried, and a few candidates are already in cosmetic use. The further combination of endocannabinoidomimitics and entourage ingredients might provide sufficient therapeutic efficacy for skin diseases, including atopic dermatitis or psoriasis.

S. Jeong and B. Park are stockholders of Sphingobrain Inc. B. Park is stockholder of Dr. Raymond laboratories Inc. 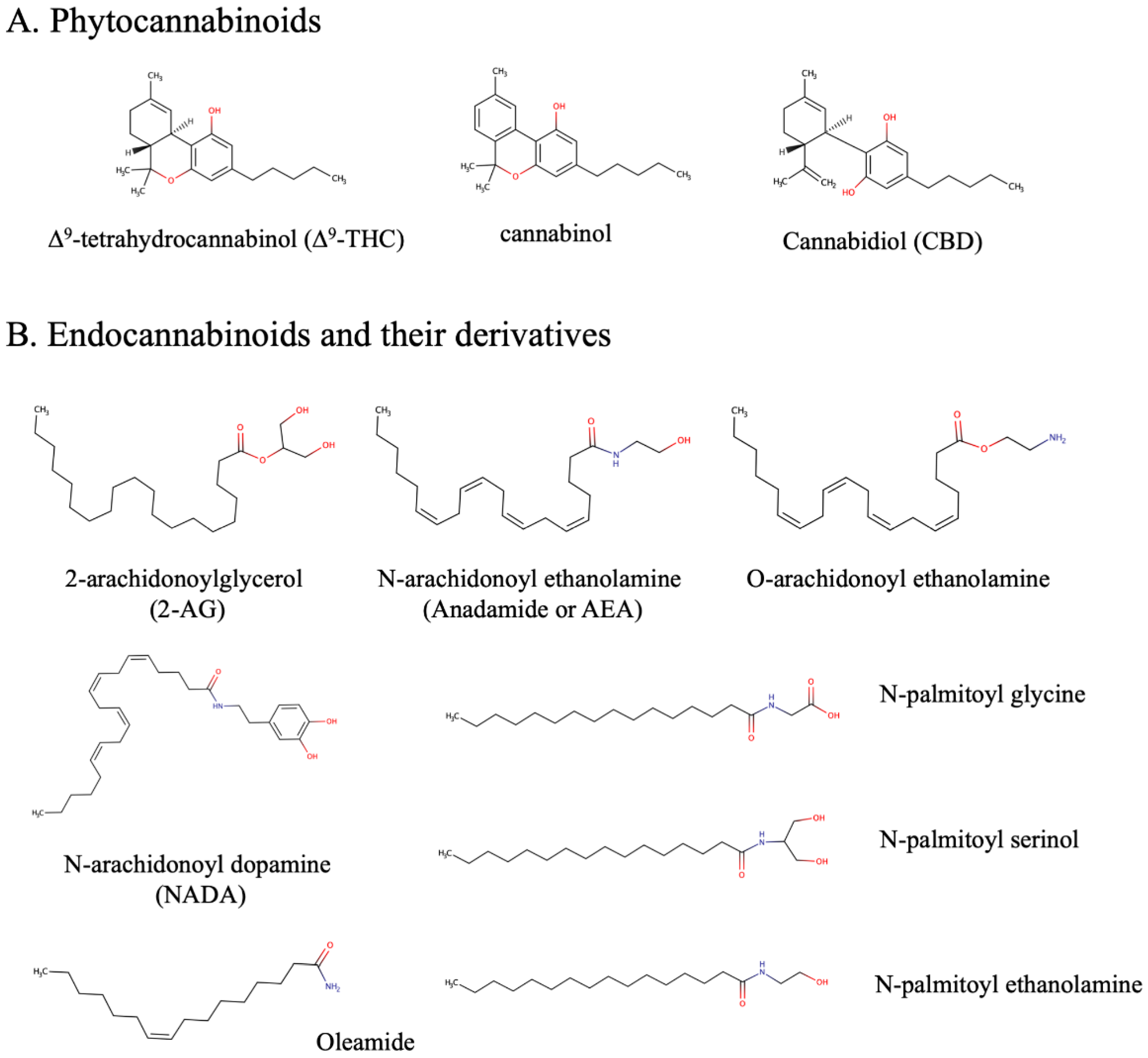