Methylglyoxal, the Major Antibacterial Factor in Manuka Honey: An Alternative to Preserve Natural Cosmetics?
Next Article in Special Issue

Bioactive Metabolites of the Stem Bark of Strychnos aff. darienensis and Evaluation of Their Antioxidant and UV Protection Activity in Human Skin Cell Cultures
Previous Article in Journal

Hesperidin is one of the most important natural flavonoids, known for its antioxidant, anti-inflammatory, anti-mutagenic, and anti-hypertensive properties. Despite its various biological activities, hesperidin is rarely used in the dermo-cosmetic field because of its poor solubility in both water and oil phases that makes difficult formulation, distribution and bioavailability through the skin layers. Moreover, hesperidin is still underestimated in skin care products, and literature data on its stability into a topical formulation are not yet available. In this paper we report the synthesis of five different derivatives of hesperidin and their evaluation in terms of antioxidant, antifungal, antiproliferative, and apoptotic effects on human leukemic K562 cells. Preliminary antiproliferative effects were considered since hyper-proliferation is involved in several cutaneous problems particularly in the case of photo-exposition and environmental pollution. Esp4 and Esp5 were found to be more active in inhibiting K562 cell growth than parent hesperidin. Esp3 exhibited different biological properties, i.e., antioxidant activity in the absence of antiproliferative effects. View Full-Text
Keywords: hesperidin; antioxidant; pro-apoptotic; antifungal; dermo-cosmetic hesperidin; antioxidant; pro-apoptotic; antifungal; dermo-cosmetic
►▼ Show Figures 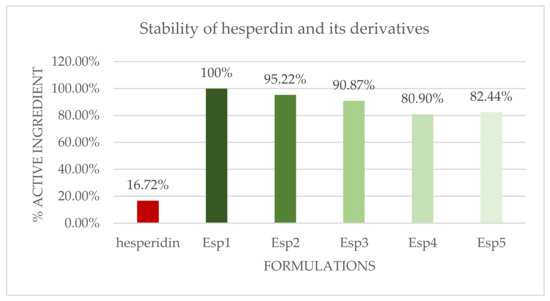