De-Escalation by Reversing the Escalation with a Stronger Synergistic Package of Contact Tracing, Quarantine, Isolation and Personal Protection: Feasibility of Preventing a COVID-19 Rebound in Ontario, Canada, as a Case Study
Previous Article in Journal

The number of screening tests carried out in France and the methodology used to target the patients tested do not allow for a direct computation of the actual number of cases and the infection fatality ratio (IFR). The main objective of this work is to estimate the actual number of people infected with COVID-19 and to deduce the IFR during the observation window in France. We develop a ‘mechanistic-statistical’ approach coupling a SIR epidemiological model describing the unobserved epidemiological dynamics, a probabilistic model describing the data acquisition process and a statistical inference method. The actual number of infected cases in France is probably higher than the observations: we find here a factor ×8 (95%-CI: 5–12) which leads to an IFR in France of 0.5% (95%-CI: 0.3–0.8) based on hospital death counting data. Adjusting for the number of deaths in nursing homes, we obtain an IFR of 0.8% (95%-CI: 0.45–1.25). This IFR is consistent with previous findings in China (0.66%) and in the UK (0.9%) and lower than the value previously computed on the Diamond Princess cruse ship data (1.3%).
Keywords: COVID-19; infection fatality ratio; case fatality rate; SIR model; mechanistic-statistical model; Bayesian inference COVID-19; infection fatality ratio; case fatality rate; SIR model; mechanistic-statistical model; Bayesian inference

The COVID-19 epidemic started in December 2019 in Hubei province, China. Since then, the disease has spread around the world reaching the pandemic stage, according to the WHO [1], on 11 March. The first cases were detected in France on 24 January. The infection fatality ratio (IFR), defined as the number of deaths divided by the number of infected cases, is an important quantity that informs us on the expected number of casualties at the end of an epidemic, when a given proportion of the population has been infected. Although the data on the number of deaths from COVID-19 are probably accurate, the actual number of infected people in the population is not known. Thus, due to the relatively low number of screening tests that have been carried out in France (about five in 10,000 people in France to be compared with 50 in 10,000 in South Korea up to 15 March 2020; sources: Santé Publique France and Korean Center for Disease Control) the direct computation of the IFR is not possible. Based on the PCR-confirmed cases in international residents repatriated from China on January 2020, Verity et al. [2] obtained an estimate of the infection fatality ratio (IFR) of 0.66% in China, and, adjusting for non-uniform attack rates by age, an IFR of 0.9% was obtained in the UK [3]. Using data from the quarantined Diamond Princess cruise ship in Japan and correcting for delays between confirmation and death, Russel et al. [4] obtained an IFR of 1.3%.
Using the early data (up to 17 March) available in France, our objectives are: (1) to compute the IFR in France, (2) to estimate the number of people infected with COVID-19 in France, and (3) to compute a basic reproduction number .

We obtained the number of positive cases and deaths in France, day by day from Johns Hopkins University Center for Systems Science and Engineering [5]. The data on the number of tests carried out was obtained from Santé Publique France [6]. As some data (positive cases, deaths, number of tests) are not fully reliable (example: 0 new cases detected in France on 12 March 2020), we smoothed the data with a moving average over 5 days. Official data on the number of deaths by COVID-19 in France only take into account hospitalised people. About 728,000 people in France live in nursing homes (EHPAD, source: DREES [7]). Recent data in the Grand Est region (source: Agence Régionale de Santé Grand Est [8]), report a total of 570 deaths in these nursing homes, which have to be added to the official count (1015 deaths on 31 March).

The mechanistic-statistical formalism, which is becoming standard in ecology [9,10,11] allows the analyst to couple a mechanistic model that describes a latent variable, here an ordinary differential equation model (ODE) of the SIR type, and uncertain, non-exhaustive data. To bridge the gap between the mechanistic model and the data, the approach uses a probabilistic model describing the data collection process. A statistical method is then used for the estimation of the parameters of the mechanistic model.
Mechanistic model. The dynamics of the epidemic are described by the following SIR compartmental model: with S the susceptible population, I the infected population, R the recovered population (immune individuals) and the total population, supposed to be constant. The parameter is the infection rate (to be estimated) and is the mean time until an infected becomes recovered. Based on the results in [12], the median period of viral shedding is 20 days, but the infectiousness tends to decay before the end of this period: the results in [13] show that infectiousness starts from 2.5 days before symptom onset and declines within 7 days of illness onset. Based on these observations we assume here that days.
The initial conditions are , and , where corresponds to the population size. The SIR model is started at some time , which will be estimated and should approach the date of introduction of the virus in France (this point is shortly discussed at the end of this paper). The ODE system (1) is solved thanks to a standard numerical algorithm, using Matlab® ode45 solver.
Next we denote by the number of deaths due to the epidemic. Note that the impact of the compartment on the dynamics of the SIR system and on the total population is neglected here. The dynamics of depends on trough the differential equation: with the mortality rate of the infecteds.
Observation model. We suppose that the number of cases tested positive on day t, denoted by , follow independent binomial laws, conditionally on the number of tests carried out on day t, and on the probability of being tested positive in this sample:The tested population consists of a fraction of the infected cases and a fraction of the susceptibles: . Thus, with , the relative probability of undergoing a screening test for an individual of type S vs. an individual of type I (probability of being tested conditionally on being S/probability of being tested conditionally on being I). We assume that the ratio does not depend on t at the beginning of the epidemic (i.e., over the period that we use to estimate the parameters of the model). The coefficient corresponds to the sensitivity of the test. In most cases, RT-PCR tests have been used and existing data indicate that the sensitivity of this test using pharyngeal and nasal swabs is about 63–72% [14]. We take here (70% sensitivity).

Model fit. To assess model fit, we compared the observations, i.e., the cumulated number of cases , with the expectation of the observation model associated with the MLE (expectation of a binomial). Namely, we compared and with and , the solutions of the system (1) (at time s) associated with the MLE. The results are presented in Figure 1. We observe a good match with the data.
Infection fatality ratio and actual number of infected cases. Using the posterior distribution of the model parameters (the pairwise distributions are presented in Appendix A, see Figure A1), we computed the daily distribution of the actual number of infected peoples. Using the relation (2) together with the data on , we deduce the distribution of the parameter , at each date. The IFR corresponds to the fraction of the infected who die, that is:
We thus obtain, on 17 March an IFR of 0.5% (95%-CI: 0.3–0.8), and the distribution of the IFR is relatively stable over time (see Figure A3 in the Appendix A).
Additionally, the distribution of the cumulated number of infected cases () across time is presented in Figure 2. We observe that it is much higher than the total number of observed cases (compare with Figure 1). The average estimated ratio between the actual number of individuals that have been infected and observed cases is eight (95%-CI: 5–12) over the considered period.
Taking into account the data in the nursing homes. The above computation of the IFR is based on the official counting of deaths by COVID-19 in France, which does not take into account the number of deaths in nursing homes. Based on the local data in Grand Est region, we infer that the IFR that we computed has been underestimated by a factor about , leading to an adjusted IFR of 0.8% (95%-CI: 0.45–1.25).
Basic reproduction number. With SIR systems of the form (1), the basic reproduction number can be computed directly, based on the formula [15]. When , the epidemic cannot spread in the population. When , the infected compartment I increases as long as . We computed the marginal posterior distribution of the basic reproduction number . This leads to a mean value of of 3.2 (95%-CI: 3.1–3.3). The full distribution is available in the Appendix A (Figure A4).
Sensitivity of the results with respect to the fixed model parameters. We computed the MLE with a larger infectious period () of 20 days estimated by [12]. This leads to a much larger basic reproductive number and a factor between the reported cases and the actual number of cases. However, the value of the IFR remains unchanged (0.5%). We also checked if the window width of the smoothing (moving average over 5 days) had an impact on our results. Computations of the MLE with a window width of 3 days (and ) led to the same results as those presented above, namely a and an IFR of 0.5%.

L.R., E.K.K., J.P., A.S. and S.S. conceived the model and designed the statistical analysis. L.R. and S.S. wrote the paper, L.R. carried out the numerical computations. All authors have read and agreed to the published version of the manuscript.

This work was funded by INRAE: MEDIA Network.

We thank Laurent Desvillettes for his suggestion about the computation of a lower bound for the IFR based on data from the Lombardy province in Italy. We also thank the anonymous reviewers for their suggestions and comments. 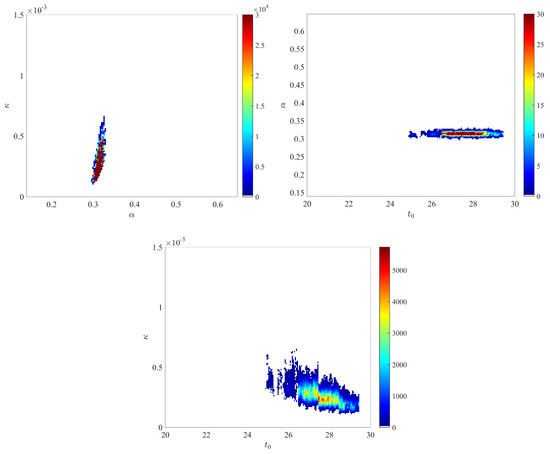 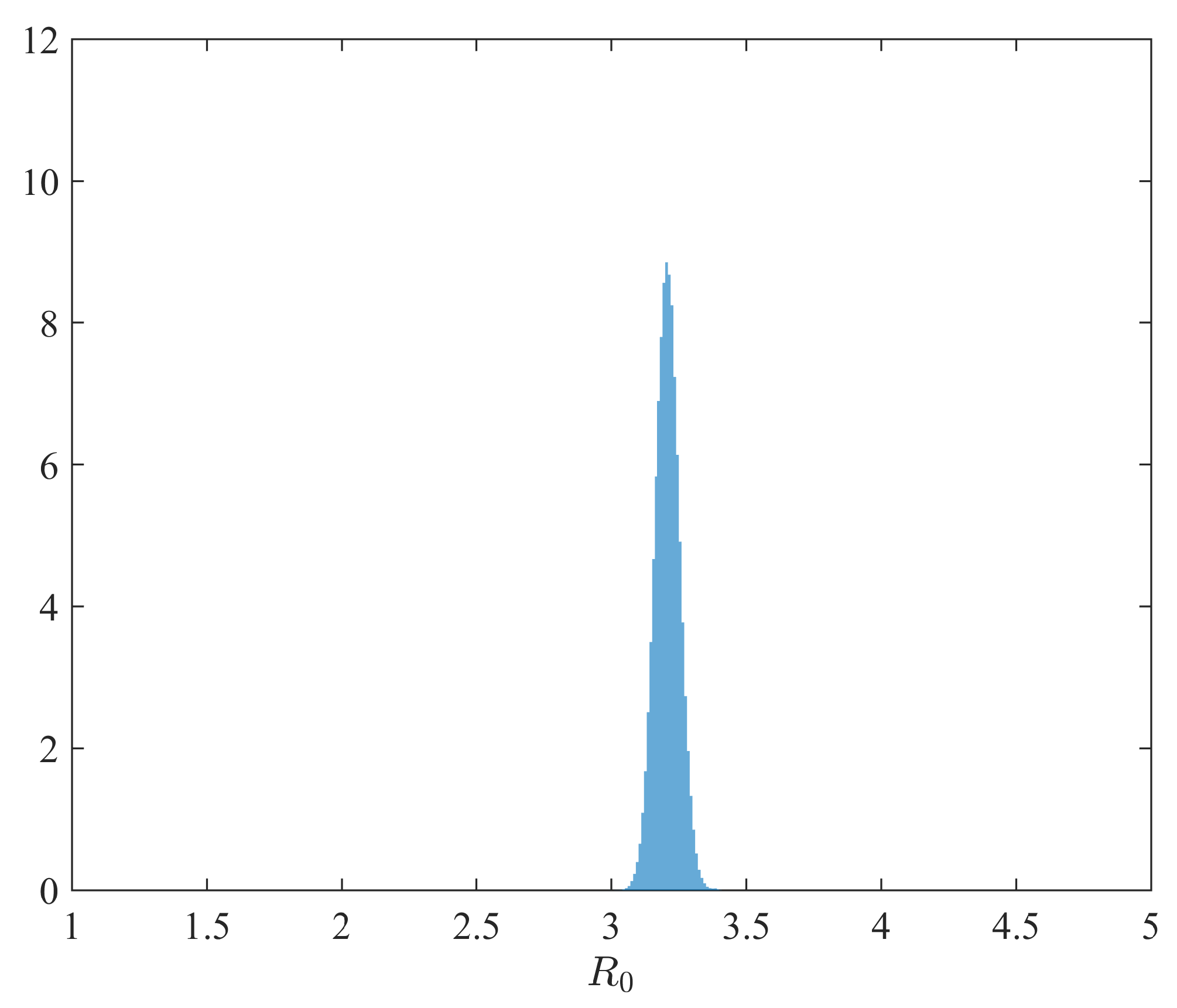