Currently, 5-fluorouracil (5-FU)-based combination chemotherapy is the mainstay in the treatment of metastatic colorectal cancer (CRC), which benefits approximately 50% of the patients. However, these tumors inevitably acquire chemoresistance resulting in treatment failure. The molecular mechanisms driving acquired chemotherapeutic drug resistance in CRC is fundamental for the development of novel strategies for circumventing resistance. However, the specific phenomenon that drives the cancer cells to acquire resistance is poorly understood. Understanding the molecular mechanisms that regulate chemoresistance will uncover new avenues for the treatment of CRC. Among the various mechanisms of acquired chemoresistance, defects in the drug metabolism pathways could play a major role. In the case of 5-FU, it gets converted into various active metabolites, which, directly or indirectly, interferes with the replication and transcription of dividing cells causing DNA and RNA damage. In this project, we developed a high-resolution mass spectrometry-based method to effectively extract and quantify levels of the 5-FU metabolites in cell lysates and media of parental and 5-FU resistant LIM1215 CRC cells. The analysis highlighted that the levels of 5-FU metabolites are significantly reduced in 5-FU resistant cells. Specifically, the level of the nucleotide fluorodeoxyuridine monophosphate (FdUMP) is reduced with treatment of 5-FU clarifying the compromised 5-FU metabolism in resistant cells. Corroborating the metabolomic analysis, treatment of the resistant cells with FdUMP, an active metabolite of 5-FU, resulted in effective killing of the resistant cells. Overall, in this study, an effective protocol was developed for comparative quantitation of polar metabolites and nucleotide analogues from the adherent cells efficiently. Furthermore, the utility of FdUMP as an alternative for CRC therapy is highlighted. View Full-Text
Keywords: 5-Fluorouracil; metabolites; precursor isotopes; single ion monitoring; high-resolution mass spectrometry; nucleotide analogue; chemoresistance; colorectal cancer 5-Fluorouracil; metabolites; precursor isotopes; single ion monitoring; high-resolution mass spectrometry; nucleotide analogue; chemoresistance; colorectal cancer
►▼ Show Figures 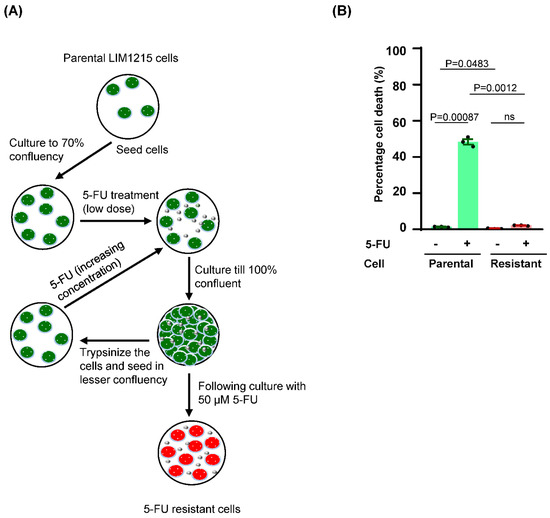