Temperature has long been known to have a profound influence on the physiology and metabolic rates of fishes [1,2]. It dictates the rate of biochemical reactions at the cellular level and leads to increased metabolic rates in warm water [3,4]. The metabolic cold adaptation hypothesis (MCA) was first proposed over 100 years ago and has since been a controversial topic in fish physiology [5,6,7,8]. MCA predicts that species from colder environments (higher latitudes or altitudes) will have elevated standard metabolic rates (SMR, minimum metabolic rates needed to sustain life) compared to those from warmer climates. A meta-analysis approach found support for MCA in that fishes with ranges extending to higher latitudes have higher SMR, higher rates of mitochondrial respiration, and higher enzyme activity than counterparts living at lower latitudes [9]. Other studies, including those by Holeton (1974) and Steffensen (2002), argued that MCA is an experimental artifact and there was no evidence of elevated SMR in Arctic or Antarctic fishes when comparisons were made to similar species from temperate regions [7,8]. Within the Fundulus notatus species group (F. notatus, F. olivaceus, and F. euryzonus), evidence of MCA was found at the intraspecific level, but not at the interspecific level [10].
Climate change is predicted to bring disproportionately large impacts to coastal estuaries due to their shallow depths and proximity to human activities [11]. The metabolic physiology of eurythermal species living in these environments is much less studied compared to other economically important fishes such as cod and salmon. Anthropogenic climate change is causing increasing average water temperatures and larger temperature variation, which warrants a better understanding of the metabolic capacities and limits of estuarine fishes [12]. In addition, most studies of metabolic adaptation of fishes have treated species as a single homogeneous unit and ignored intraspecific variation in phenotypic plasticity [13,14,15]. This hinders our ability to predict a population-specific response to acute thermal change [16,17,18].
Spotted seatrout, Cynoscion nebulosus (Cuvier), is a coastal species distributed from the Chesapeake Bay to the Gulf of Mexico [19]. With such a wide coastal distribution, it is possible that spotted seatrout populations inhabiting heterogeneous thermal environments have developed metabolic plasticity. At the northern range limit, spotted seatrout encounter comparatively low winter water temperatures, while the maximum water temperatures in summer are like those encountered in more southern regions (Figure 1). Periodic winter mortalities are most severe at high latitudes for these fishes and act as a strong selective pressure on cold tolerance [20]. Tagging studies have shown that dispersal distances of spotted seatrout are generally less than 50 km in the Gulf of Mexico and the southeastern coast of the U.S. [21,22,23,24,25]. Near the northern latitudinal limit of spotted seatrout in Virginia and North Carolina (hereafter the “northern population”), at least 25% of tagged fish were found to migrate over 100 km, presumably in response to changing water temperature [26]. Studies have also found differences in life history characteristics as compared to fish sampled farther south. Spotted seatrout sampled from Chesapeake Bay grow faster and mature at a larger size than their counterparts from South Carolina and Florida [27,28,29]. In addition, genetic studies indicate that the northern population is genetically distinct from spotted seatrout from regions south of the New River, North Carolina on the U.S. Atlantic coast (hereafter the “southern population”) [30,31,32]. This north–south differentiation provides an opportunity for intraspecific comparison of metabolic plasticity within a widely-distributed estuarine species.
A better understanding in the mechanistic basis of the observed differences between the two spotted seatrout populations is critical for predicting future response under climate change. We were interested in whether plasticity in metabolic phenotypes has arisen in populations of spotted seatrout, and whether the pattern is consistent with MCA. Our null hypotheses were:

All animal care and use protocols were approved by The College of William and Mary’s Institutional Animal Care and Use Committee (IACUC-2017-09-25-12356-jrmcdo). Spotted seatrout (Cynoscion nebulosus) were captured by hook and line from two locations approximately 800 km apart: (1) Corrotoman River, Virginia (n = 20, VA, latitude 37.732985, longitude −76.408968) and (2) areas near Charleston, South Carolina (n = 11, SC, latitude 32.753055, longitude −79.896670, Table 1). Both populations were sampled in November 2017, however, some SC fish died after transportation from SC to VA. The Southern population (SC) was sampled again (n = 6) in April 2017. Sampling dates for each fish in each site, weight, time spent in acclimation, and the test in which it was used are included in Table S1. Fish from each sampling location were acclimated in separate flow-through 10,000 L circular aquaria. Water temperature was maintained at 15 ± 1 °C and 20 ± 1 °C using heat exchangers (subsequently referred to as cold-stress experiments and heat-stress experiments, respectively). Salinity from the York River ranged from 15–22 ppt over the acclimation periods. Water quality including pH, ammonia, nitrate, and nitrite levels were checked daily using a commercial kit (Master Test Kits, API, Chalfont, PA, USA). The cold-stress experiments were conducted between January and May 2018 and the heat-stress experiments were conducted between July and August 2018. All fish were fed frozen and thawed bay anchovies (Anchoa mitchilli) every 2 days to satiation. Prior to an experiment, food was withheld for 48 h to ensure complete gastric evacuation [33].

We used automated intermittent-flow respirometry to determine oxygen consumption rates (MO2, mg O2 kg−1 h−1) as described elsewhere [34,35]. This procedure is considered the best practice for measuring MO2 in fishes as it records MO2 with high temporal resolution, without the constant presence of a researcher [36,37].
At the start of each trial, fish were gently netted from the holding tanks and placed into either a 4 L or 7 L cylindrical respirometer (Loligo System, Viborg, Denmark) depending on the total length of the fish. The partial pressure of oxygen (PO2, mm Hg) in the respirometers was continuously measured with a fiber-optic oxygen meter (model FSO2-4, PyroScience, Aachen, Germany). The sensors were calibrated using two-point methods according to the manufacturer’s handbook prior to experiments and mounted in the recirculation loop of the respirometer. Each ṀO2 measurement was executed using a 180 s flush, 60 s wait and 180–1200 s measurement period (5 °C, 1200 s; 10 °C, 600 s; 15 °C, 300 s; 20 °C, 240 s; 25 °C, 240 s; 30 °C, 180 s). This is because fish metabolic rate correlates positively with water temperature. Longer measurement periods were needed at lower temperatures for fish to consume a similar amount of oxygen at higher temperatures. The operation of the system and data recording was done via the AquaResp software (available at: www.aquaresp.com).
Individual fish in the cold-stress group were exposed to three water temperatures: 15 °C (20 h), 10 °C (5 h) and 5 °C (18 h) in each experiment. Experiments on individuals from the heat-stress group were also exposed to three water temperatures: 20 °C (20 h), 25 °C (5 h) and 30 °C (18 h). The acute decreases or increases between temperature steps were completed within 2 h. The range of temperatures is representative of the temperature limits of the estuarine environment spotted seatrout occupy. Because of the limited availability of specimens from SC, the last six fish were returned to the holding tank after the cold-stress experiment and re-acclimated for at least 30 days at 20 °C before the heat-stress experiments (all fish survived the acute temperature changes, except for a single fish from SC, which died during a heat stress experiment due to equipment failure). Between trials, respirometers and connecting tubing were thoroughly cleaned with bleach and rinsed with a large amount of fresh water. Bacterial background respiration was measured after fish were removed at the end of cold-stress or heat-stress experiments (5 °C, 30 °C, respectively). Background respiration values were negligible (< 1% of the rate of oxygen decline recorded when fish were present) during both the cold-stress and heat-stress experiments and were subsequently ignored.
MO2 for a given measurement period was calculated from the time course of oxygen partial pressure (PO2) change: MO2 = VΔPO2Δt−1β, where V is the respirometer volume (L) corrected for fish volume (assuming 1 kg = 1 L), ΔPO2Δt−1 is the slope of the linear regression (mm Hg·h−1), and β is the oxygen solubility coefficient (mg O2 mm Hg−1·L−1) [38]. Slopes with r2 < 0.95 were excluded from analyses.

To compare the metabolic rates between different fish, all values were normalized to a standard body weight (the mean body weight of all fish used in the experiments, which equaled 0.34 kg). The following formula was used: where is the mass-specific oxygen consumption rate (mg O2 kg−1 h−1), is the observed oxygen consumption rate (mg O2 kg−1 h−1), and is the actual weight (kg) of the fish. The range of body weight of experimental animals was too small (less than an order of magnitude) to determine the mass exponent b [39]. Therefore, we used b = 0.948, which is the average value using all available data on teleost to correct for SMR [40]. MMR was corrected using the same formula but with b = 0.937 [40].

We defined SMR as the minimum metabolic rate of a post-absorptive fish at a given temperature. At the starting temperatures, 15 °C and 20 °C, MO2 was initially elevated because of handling stress and gradually declined to SMR (Figure 2). We used the mclust package [41] implemented in R [42], which fits a mixture of normal distributions to the data [41]. For each fish, the mean of the lowest normal distribution was taken as the SMR [43].
MMR was defined as the single highest MO2 value at 15 °C and 20 °C for individual fish. We calculated two measures of aerobic scope: absolute aerobic scope (AAS) and factorial aerobic scope (FAS). The former is the difference between MMR and SMR, and the latter is calculated as the ratio of MMR/SMR [44]. We quantified thermal sensitivity by Q10 values (i.e., the factor by which the rate of a biochemical process changes over a 10 °C change in temperature) using the following formula [45]: where R1 and R2 are the SMR at temperature t1 and t2 (t1 + 10 °C), respectively.
We used the nlme package [46] implemented in R [42] to perform a linear mixed effects analysis of the relationship between SMR and origin of the fish. As fixed effects, we entered fish origin, temperature and their interaction term into the model. We used individual fish as a random effect. p-values were obtained by likelihood ratio tests of the full model with the effect in question against the model without the effect in question. Two-tailed Student’s t-test was used to compare means between groups. A significance level of α = 0.05 was used for all statistical tests.

The results of this study are consistent with the predictions of the MCA hypothesis. Northern populations of spotted seatrout were found to have greater metabolic plasticity than its southern counterparts when compared at ecologically relevant water temperatures. This finding can be explicitly incorporated into modeling framework to predict range shifts of spotted seatrout in response to climate change.

We thank Susanna Musick, Patrick McGrath, John Archambault, Steve Arnott, Timothy O’Donnell for helping us to obtain live spotted seatrout for this study. We also thank two anonymous reviewers whose comments significantly improved the manuscript. This paper is Contribution No. 3832 of the Virginia Institute of Marine Science, William & Mary. 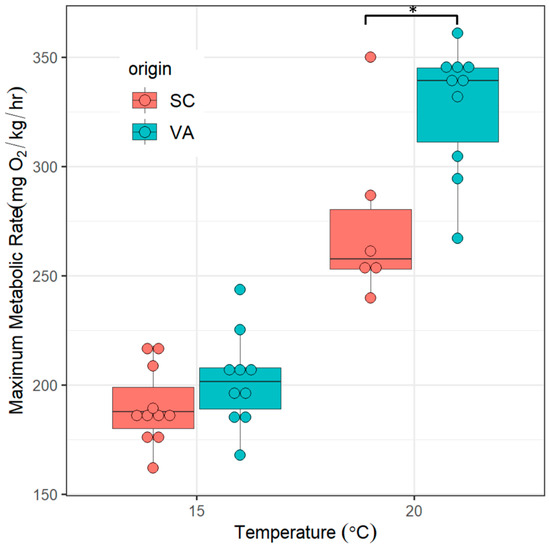 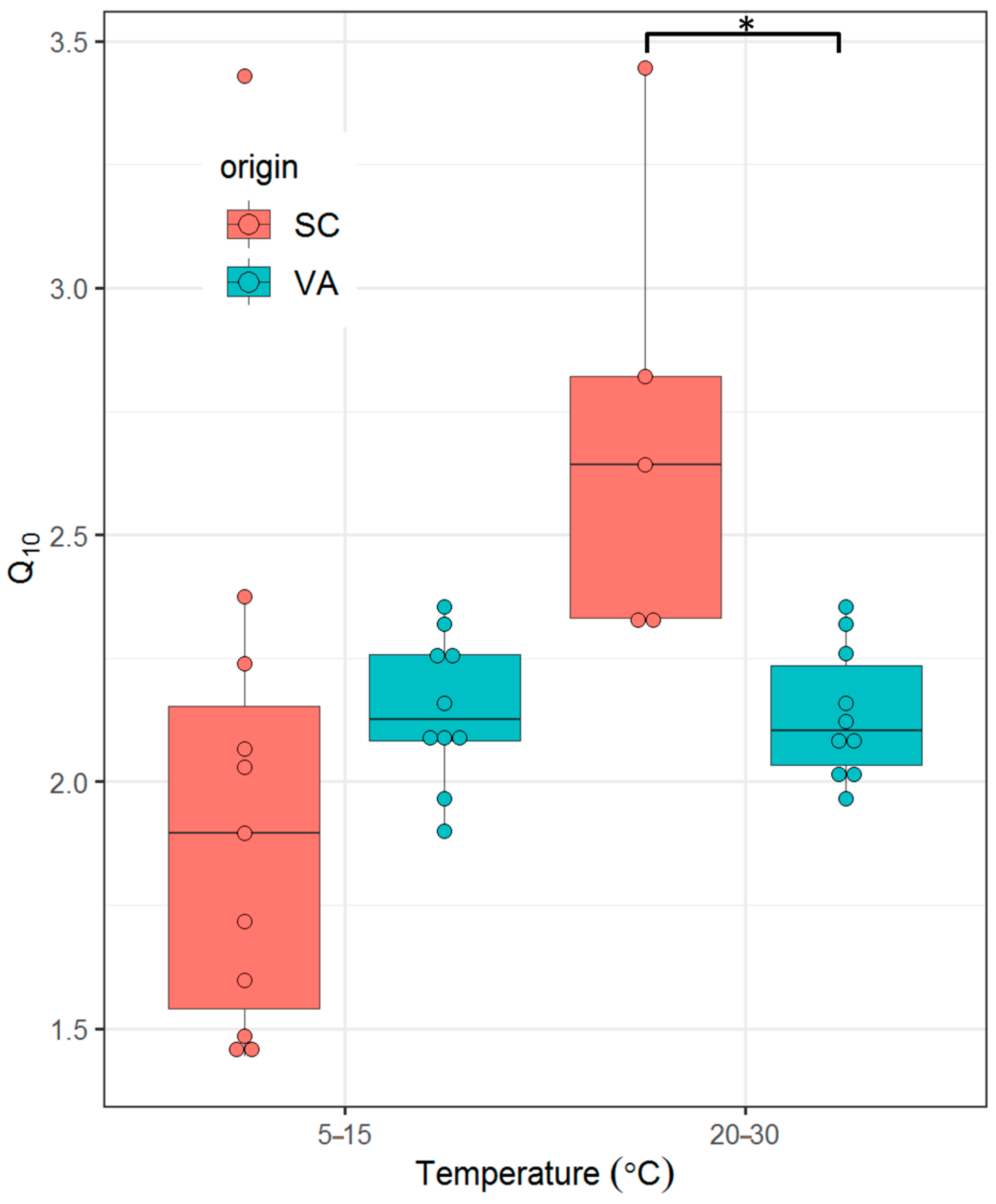