Large-area and uniform plasmonic nanostructures have often been fabricated by simply evaporating noble metals such as gold and silver on a variety of nanotemplates such as nanopores, nanotubes, and nanorods. However, some highly uniform nanotemplates are limited to be utilized by long, complex, and expensive fabrication. Here, we introduce a cost-effective and high-throughput fabrication method for plasmonic interference coupled nanostructures based on quasi-uniform anodic aluminum oxide (QU-AAO) nanotemplates. Industrial aluminum, with a purity of 99.5%, and copper were used as a base template and a plasmonic material, respectively. The combination of these modifications saves more than 18 h of fabrication time and reduces the cost of fabrication 30-fold. From optical reflectance data, we found that QU-AAO based plasmonic nanostructures exhibit similar optical behaviors to highly ordered (HO) AAO-based nanostructures. By adjusting the thickness of the AAO layer and its pore size, we could easily control the optical properties of the nanostructures. Thus, we expect that QU-AAO might be effectively utilized for commercial plasmonic applications.
Keywords: nanoplasmonics; optical interference; cost-effective; high-throughput; anodic aluminum oxide; quasi-uniform nanoplasmonics; optical interference; cost-effective; high-throughput; anodic aluminum oxide; quasi-uniform

Plasmonic nanostructures are critically promising for next-generation optical devices such as displays and optical sensors [1,2,3,4,5,6,7,8]. Particularly, large-area plasmonic nanostructures are quite important to design and develop industrial plasmonic applications [9,10,11,12,13]. Normally, previous fabrication techniques for large-area plasmonic structures are limited by being high in cost, with low throughput and low reproducibility [14,15,16]. To overcome these disadvantages, template-based lithography for large-area uniform plasmonic nanostructures has been developed, but the large-area uniform template fabrications still are high in cost and their throughputs are very low [17,18,19,20].
Anodic aluminum oxide (AAO) films containing self-ordered nanoscale pores have been extensively studied, as they can be served as a versatile template in various applications, including nanostructure synthesis, catalysis, and in biosensors [21,22,23,24,25,26,27,28,29,30,31]. For instance, controlled electrochemical treatments could produce highly reproducible nanotemplates with various pore sizes and array patterns [23,24,25]. A large surface area ratio over volume in AAO results in enhanced chemical reaction in catalytic applications [26,27]. The periodic nanoarrays are also excellent platforms for biosensing applications [28,29]. Noble metals such as gold and silver, deposited on AAO nanopores, for instance, form hotspots in surface-enhanced Raman spectroscopy (SERS) measurement. With an improved AAO fabrication, high SERS sensitivity (i.e., a detection limit of ~fM) has been recently demonstrated [30,31,32,33,34].
Many previous studies have used highly ordered AAO (HO-AAO), which often raises issues such as a long fabrication time, high cost, and a low throughput [35,36,37]. HO-AAO nanotemplates are normally obtained by the standard two-step anodization process, where two subsequent anodizations with chemical etching in between produce a closely-packed and self-ordered honeycomb array of alumina nanoholes [23,24]. The process includes a long anodization period (i.e., more than 12 h in the first step) and a wet etching (i.e., more than 6 h) procedure. Furthermore, HO-AAO structures require expensive high purity (e.g., 99.999%) aluminum (Al) substrates, and a notable amount of Al is consumed during the etching process. Previously, our group also utilized HO-AAO as large-area uniform plasmonic templates, where we have investigated plasmonic interference coupling effects [38,39,40]. When the constructive interference was matched with the plasmonic layer, it mediated strong plasmonic absorption. We could easily control the strong plasmonic absorption by tailoring the thickness and pore size of the HO-AAO layer. Particularly, we could develop uniform plasmonic core-satellite structures by controlling the morphology of the HO-AAO. However, for the practical usage of AAO in various industrial applications, a low-cost and high-throughput fabrication method needs to be investigated.
In this study, we present a cost-effective and high-throughput fabrication method for plasmonic interference coupled nanostructures for use in various plasmonic applications. While achieving similar optical properties as the traditional method based on HO-AAO templates, we are able to significantly reduce the total fabrication time and cost. This is realized by several modifications of the fabrication procedures. First, we start the process with a relatively inexpensive Al substrate (i.e., a purity of 99.5%) which costs 30 times less than the high purity Al substrate of 99.999%. Second, we reduce the two-step anodization process to a single step, which saves more than 18 h of fabrication time, thus producing quasi-uniform (QU) AAO templates. Third, we use copper as the plasmonic material, observing similar optical responses as when gold and silver are used. This suggests even further cost savings by using copper instead of expensive noble metals. The optical properties are characterized by reflectance measurements in the visible wavelength range. By controlling the AAO thickness and its pore size, we are able to tune the resonance wavelength in the reflectance spectrum and realize a similar optical response when compared to the traditionally fabricated HO-AAO-based plasmonic nanostructures. We also find that inexpensive coating materials such as copper can be as good as noble metals. Furthermore, we demonstrate that such a low-cost plasmonic interference coupled nanostructure could be achieved on a flexible platform (i.e., a flexible optical nanodevice). As a demonstration of the plasmonic characteristics, we perform SERS measurements with Rhodamine 6G (R6G) dye molecules on our QU-AAO-based plasmonic nanostructures. The method developed in this paper yields a cost-effective, high-throughput and large-area fabrication of AAO plasmonic nanostructures suitable for various commercial plasmonic applications.

Aluminum (Al) sheets with the purity of 99.999% (Sigma-Aldrich, Saint Louis, MO, USA) and 99.5% (Sigma-Aldrich) were prepared to compare the morphological and optical properties of the nanostructures. To remove the existing oxide layer and smoothen the rough surface, an electropolishing process was applied to the pristine Al substrate prior to any anodization process. This process was done by immersing the substrate into a mixture of perchloric acid (SAMCHUN, Seoul, Korea) and ethanol (HClO4:C2H5OH = 1:4 volumetric ratio) and connecting it to the positive terminal of a 20 V DC power supply (i.e., an anode) at a temperature of 7 °C while a platinum plate was connected to the cathode terminal. The distance between electrodes was about 2 cm. When DC voltage was applied, the metal surface was dissolved into the electrolyte while a current flowed from the anode to the cathode. After the electropolishing process was carried out for 3 min, the substrate was anodized in a 0.3 M oxalic acid (SAMCHUN) electrolyte at 40 V and 15 °C (anodization process). During the anodization time, a porous alumina layer grew, where the thickness varied from a few nanometers to several hundred micrometers. The wet etching process required for HO-AAO templates was performed for ~6 h inside in a mixture of 1.8 wt.% chromic acid (JUNSEI, Tokyo, Japan) and 6 wt.% phosphoric acid (DAEJUNG, Siheung, Korea) at 65 °C. The pore widening process occurred in 0.1 M phosphoric acid at 30 °C. As a flexible form, 500 nm thick Al was deposited on a polyethylene terephthalate (PET) substrate. The first-step anodization of Al under the same condition above provides a QU-AAO with an Al layer at the bottom. The size we used was 1 cm × 5 cm, but this could easily be scaled up. For the metal deposition, a thermal evaporator was used (10−5 Pa, 15 min). 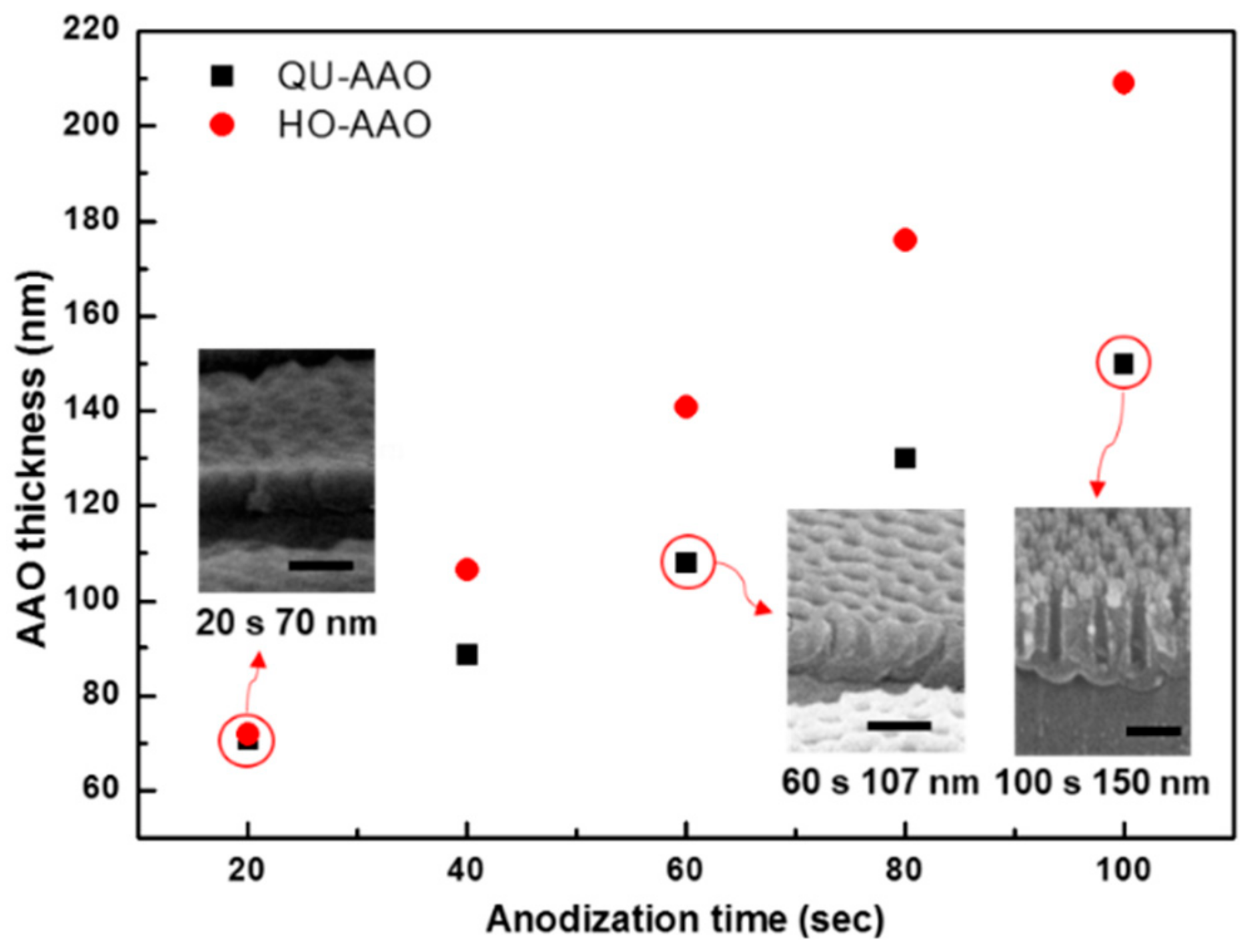 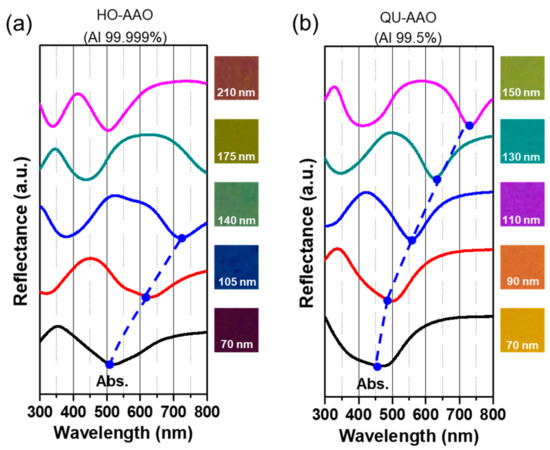 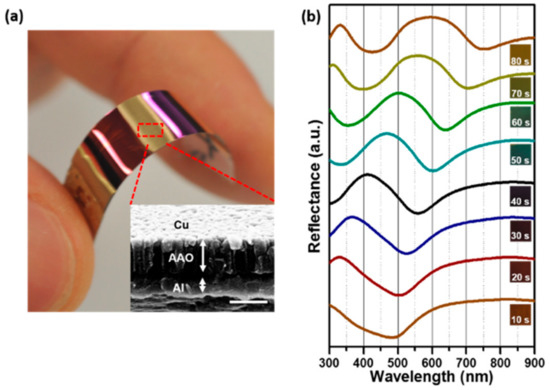