The Pulsed Electron Deposition Technique for Biomedical Applications: A Review

In recent years, it has been found that small weight percent additions of silicon to HA can be used to enhance the initial response between bone tissue and HA. A large amount of research has been concerned with bulk materials, however, only recently has the attention moved to the use of these doped materials as coatings. This paper focusses on the development of a co-RF and pulsed DC magnetron sputtering methodology to produce a high percentage Si containing HA (SiHA) thin films (from 1.8 to 13.4 wt.%; one of the highest recorded in the literature to date). As deposited thin films were found to be amorphous, but crystallised at different annealing temperatures employed, dependent on silicon content, which also lowered surface energy profiles destabilising the films. X-ray photoelectron spectroscopy (XPS) was used to explore the structure of silicon within the films which were found to be in a polymeric (SiO2; Q4) state. However, after annealing, the films transformed to a SiO44−, Q0, state, indicating that silicon had substituted into the HA lattice at higher concentrations than previously reported. A loss of hydroxyl groups and the maintenance of a single-phase HA crystal structure further provided evidence for silicon substitution. Furthermore, a human osteoblast cell (HOB) model was used to explore the in vitro cellular response. The cells appeared to prefer the HA surfaces compared to SiHA surfaces, which was thought to be due to the higher solubility of SiHA surfaces inhibiting protein mediated cell attachment. The extent of this effect was found to be dependent on film crystallinity and silicon content. View Full-Text
Keywords: hydroxyapatite; thin film; RF magnetron sputtering; pulsed DC; Silicon hydroxyapatite; thin film; RF magnetron sputtering; pulsed DC; Silicon
►▼ Show Figures 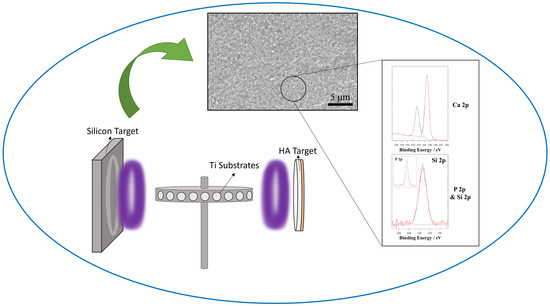