What Electrochemical Biosensors Can Do for Forensic Science? Unique Features and Applications
Next Article in Special Issue

Background: In vitro cell culture monitoring can be used as an indicator of cellular oxidative stress for the assessment of different chemotherapy agents. Methods: A cell-based bioelectric biosensor was used to detect alterations in superoxide levels in the culture medium of HeLa cervical cancer cells after treatment with the chemotherapeutic agent 5-fluorouracil (5-FU). The cytotoxic effects of 5-fluorouracil on HeLa cells were assessed by the MTT proliferation assay, whereas oxidative damage and induction of apoptosis were measured fluorometrically by the mitochondria-targeted MitoSOX™ Red and caspase-3 activation assays, respectively. Results: The results of this study indicate that 5-FU differentially affects superoxide production and caspase-3 activation when applied in cytotoxic concentrations against HeLa cells, while superoxide accumulation is in accordance with mitochondrial superoxide levels. Our findings suggest that changes in superoxide concentration could be detected with the biosensor in a non-invasive and rapid manner, thus allowing a reliable estimation of oxidative damage due to cell apoptosis. Conclusions: These findings may be useful for facilitating future high throughput screening of different chemotherapeutic drugs with a cytotoxic principle based on free radical production. View Full-Text
Keywords: anticancer therapeutic strategies; apoptosis; bioelectric; biosensor; 5-fluorouracil; HeLa cell line; superoxide anticancer therapeutic strategies; apoptosis; bioelectric; biosensor; 5-fluorouracil; HeLa cell line; superoxide
►▼ Show Figures 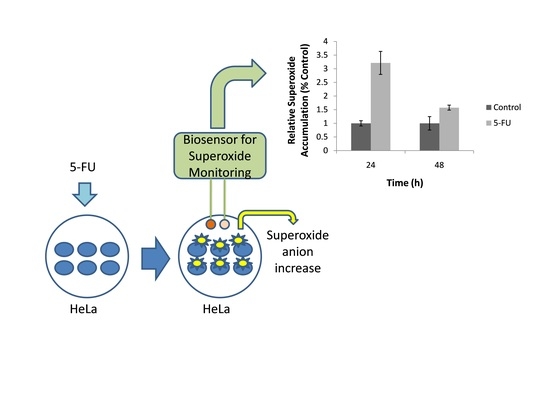