Magnetic nanoparticles (NPs), usually made from iron (II, III) oxide (magnetite, Fe3O4), are widely utilized in various biomedical applications such as targeted drug delivery [1,2] and as contrast agents in magnetic resonance imaging (MRI) [3,4,5]. Materials that are ferromagnetic and ferrimagnetic possess spontaneous magnetic domains, which are regions within the materials where the individual atom’s magnetic moments are aligned. At a small enough size, only a single domain will be formed, leading to strong magnetization within a magnetic field. This phenomenon, called superparamagnetism, occurs in nanoparticles of a certain size. The size required to induce superparamagnetism is material-dependent, but is frequently found within the range of 10–20 nm [6]. A notable property of superparamagnetic materials is that they are unable to retain their magnetization when the magnetic field is removed. This lack of magnetic memory allows the nanoparticles to not aggregate due to magnetic polarity, allowing them to maintain their colloidal stability and avoid any embolization of the blood vessels when they are utilized in vivo [6,7].
Initial investigations on superparamagnetic NPs have limited reports on biological responses, but rather focused on synthesis routes and characterization of the physicochemical properties [7]. Crystallinity, size control, and shape are among the important considerations for selecting a process for the chemical synthesis of magnetic nanoparticles [8,9]. This study uses hydrothermal synthesis, which produces particles through the process of subjecting a high temperature aqueous solution to high vapor pressure [10]. The size of the resulting NPs produced by this method can be controlled by reactant concentration, reaction time, and temperature [11,12]. Compared to other methods, such as chemical and biosynthesis of magnetite [13,14,15], hydrothermal synthesis can be performed as a one-pot reaction. In addition, using ethylene glycol as the solvent alleviates the oxidation of Fe2+, allowing the reaction to proceed in the presence of oxygen [16]. When coated with various functional groups, Fe3O4 NPs can present differences in cytotoxicity and genotoxicity to different cell types [17]. In addition, when injected in vivo, protein coronas are more likely to form on TiO2 and Au-coated magnetite NPs compared to polyvinyl alcohol (PVA) and SiO2-coated NPs [18]. In this study, we investigate the changes to cytotoxicity in vitro after surface coating with n-octyltriethoxysilane. The use of silane-based coatings for magnetite nanoparticles has been reported to enhance biocompatibility [19].
The toxic effects of magnetic NPs, especially on neural-type cells, have been of strong interest due to increased use as MRI contrast agents [20,21,22,23]. Moreover, these NPs have been reported to possess the ability to cross the blood-brain barrier (BBB) and directly reach the brain tissue [24,25]. In the literature, neurotoxicity of magnetic NPs has been evaluated utilizing a variety of neural-type cells including neuronal cancer and neural progenitor cells, from non-human mammals and humans [26,27,28,29,30]. Ultimately, while a certain degree of neurotoxicity has been observed from these nanoparticles, it is difficult to compare existing biological results between studies due to differences in NP synthesis conditions, surface modifications, and cell types. As seen in Figure 1, the main objective of this study was to evaluate the neurotoxicity of magnetite NPs synthesized via hydrothermal synthesis with PC12 rat pheochromocytoma and ReNcell VM, an immortalized human neural stem cell line [31]. Compared to neural stem cells, the PC12 cell line is an inexpensive model for neuronal studies and has been utilized for nanoparticle toxicology studies [32]. Additionally, we evaluate how biological results are affected when iron oxide nanomaterials are coated with n-octyltriethoxysilane, which results in hydrophobic surfaces.

Ferric chloride hexahydrate (405 mg, 1.50 mmol) and sodium acetate trihydrate (1.08 g, 7.9 mmol) were added to an autoclave vessel (Parr Instrument Company, Moline, IL, USA) along with ethylene glycol (15 mL, 269 mmol). The autoclave vessel was assembled and placed into a furnace (Barnstead Thermolyne FB1415M, Waltham, MA, USA) at 200 °C for 24 h. After 24 h had passed, the vessel was removed from the furnace with tongs and allowed to cool to room temperature. Excess ethylene glycol was removed, and the nanoparticles were transferred to a 50 mL conical tube with 20 mL of 50% (v/v) ethanol in water. The nanoparticles were dispersed by ultrasonication at 185 W for 5 min (Fisher Scientific FS110D), followed by pelletization via centrifugation at 1000 × g for 5 min. A magnet was used to pull the smaller magnetic particles to the bottom of the tube. The supernatant liquid was removed, and the nanoparticles were washed with 20 mL of 50% (v/v) ethanol in water two more times. After the final wash, nanoparticles were air dried in a chemical fume hood. These non-functionalized nanoparticles were designated as hydrophilic nanoparticles.

PC12 and RVM cells were seeded in 96-well plates at a density of 1 × 104 cells per well with 100 µL proliferation media. The cells were stabilized for 16 to 24 h and media changed prior to treatment with varying amounts of nanoparticles. After sonication, the sterile 10 mg/mL nanoparticle stock suspension was diluted to 1 mg/mL with sterile deionized water. Starting at 64 µL (64 µg nanoparticles, corresponding to approximately 0.39 mg/mL), serial dilutions were performed using sterile deionized water (1:2 per dilution down to 0.5 µg nanoparticles, corresponding to approximately 0.003 mg/mL). To each well containing 100 µL proliferation medium, 64 µL of diluted nanoparticle suspensions were added directly (total final volume 164 µL per well). Sterile deionized water (64 µL) without nanoparticles was added to control wells. After 24 h, cells were washed three times with PBS. For quantitative viability analysis, the cells were treated with PrestoBlue™ cell viability reagent following the manufacturer’s protocol. For LIVE/DEAD staining, 10 µL LIVE/DEAD solution was added to each well without washing the cells (final concentrations: 2 µM Calcein AM and 4 µM Ethidium Homodimer-1). After incubation for 30 min, the cells were washed three times with proliferation medium and imaged with an Olympus IX83-DSU microscope equipped with a Hamamatsu ORCA-R2 CCD camera and a Chamlide LCI live cell imaging stage-top incubator.

2.9. PC12 and RVM Differentiation with Nanoparticles

Fixed cells were permeabilized and blocked with a solution of 5% (v/v) donkey serum and 0.3% (v/v) Triton™ X-100 in PBS for 30 min at room temperature. The samples were then washed three times with PBS. Primary antibodies (β-III tubulin; AB9354, GAP-43; AB5220) were diluted 1:200 in blocking solution and samples were incubated for 2 h at room temperature or overnight at 4 °C. Samples were then washed again with the protocol above, followed by incubation with 1:200 diluted fluorophore-conjugated secondary antibodies for 1 h at room temperature. After another PBS wash, nuclei were stained with 1 µg/mL Hoechst 33342 in PBS for 15 min at room temperature. The samples were washed a final time with PBS and were kept hydrated in fresh PBS for imaging on an Olympus IX83-DSU microscope equipped with a Hamamatsu ORCA-R2 CCD camera.
ImageJ was used to quantify the expression of β-III tubulin or growth associated protein 43 (GAP-43) from immunocytochemistry samples. The channels for each image were separated and the nuclei were counted using an in-house programmed ImageJ macro for consistency. Briefly, the nuclei channel was background subtracted and contrast enhanced, followed by conversion to binary. The resulting image was analyzed with the particle analysis plug-in with watershed enabled. The β-III tubulin and GAP-43 fluorescence was background corrected by first duplicating the channel. A 200-pixel Gaussian blur was applied to the copy, which was then subtracted from the original image. The resulting image was auto contrast enhanced and merged with the blue nuclei channel. The number of cells expressing β-III tubulin or GAP-43 was manually counted using the cell counter plug-in. Total positive expression was calculated from the ratio of β-III tubulin or GAP-43 positive cells to total nuclei in each individual image.

Prussian blue staining was carried out on fixed, differentiated cells using a previously published procedure by Miyoshi et al. [35]. Identical to the differentiation protocol, cells were treated with 1 µg nanoparticles for 24 h prior to differentiation. This amount of nanoparticles corresponds to approximately 0.006 mg/mL (164 µL total well volume). A solution of 4% (w/v) potassium ferricyanide and 4% (v/v) HCl in water were separately prepared by dissolving overnight at room temperature using a magnetic stirrer. These solutions were then combined at a 1:1 ratio and added to differentiated, fixed PC12 and RVM cells. The samples were incubated at 37 °C for 20 min and then washed three times with PBS. A solution of 0.1% (w/v) nuclear fast red and 5% (w/v) aluminum sulfate was added to each well. The samples were incubated for 20 min, followed by sequential washing with PBS three times and deionized water three times. Images were obtained using an Olympus CKX-41 microscope equipped with an Infinity1-2CB camera. Using the Prussian blue and nuclear fast red images, the number of positively stained cells was determined. Positively stained cells were defined as cells with the Prussian blue stain overlapping the cell body.

Magnetite nanoparticles were successfully synthesized using the hydrothermal methods that produced aggregated nanoparticles. The nanomaterials were further surface functionalized with n-octyltriethoxysilane to increase hydrophobicity which resulted in decreased cytotoxic effects. The hydrophobic coating significantly altered the size of the individual nanoparticles as well as the size of the aggregates. It was also important to analyze the iron oxide particle samples before and after the sterilization process. Regarding biological studies, significant differences in toxicological profiles were observed in two mammalian cell lines (that can differentiate into neuronal cells). The hydrophilic nanoparticles had decreased cellular association in PC12 rat pheochromocytoma cells, but not in RVM human neural stem cells, which may be due to serum adsorption. We identified a safe treatment dose in which no significant changes to neurite outgrowth and differentiation profiles were observed in the two tested cell lines. We currently utilize these hydrophobic nanoparticles to engineer hydrophobic microspheres (for tissue engineering) and defining the toxic potential of the incorporating iron oxide species was an important and necessary characterization step with long-term effects in mind for future clinical studies.

This research is funded by Temple University and GDFI Braincell Laboratory Co., Ltd.

The authors declare no conflict of interest. The sponsors had no role in the design of the study; in the collection, analyses, or interpretation of data; in the writing of the manuscript; or in the decision to publish the results. 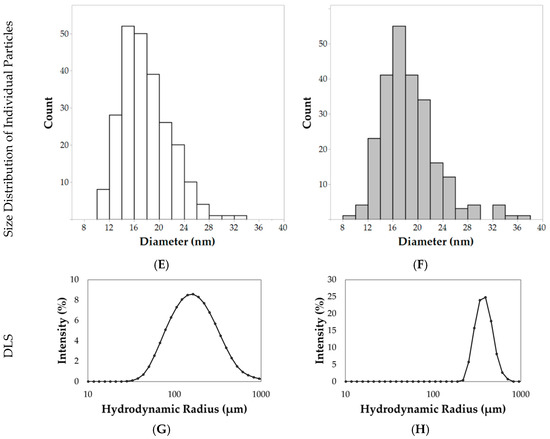 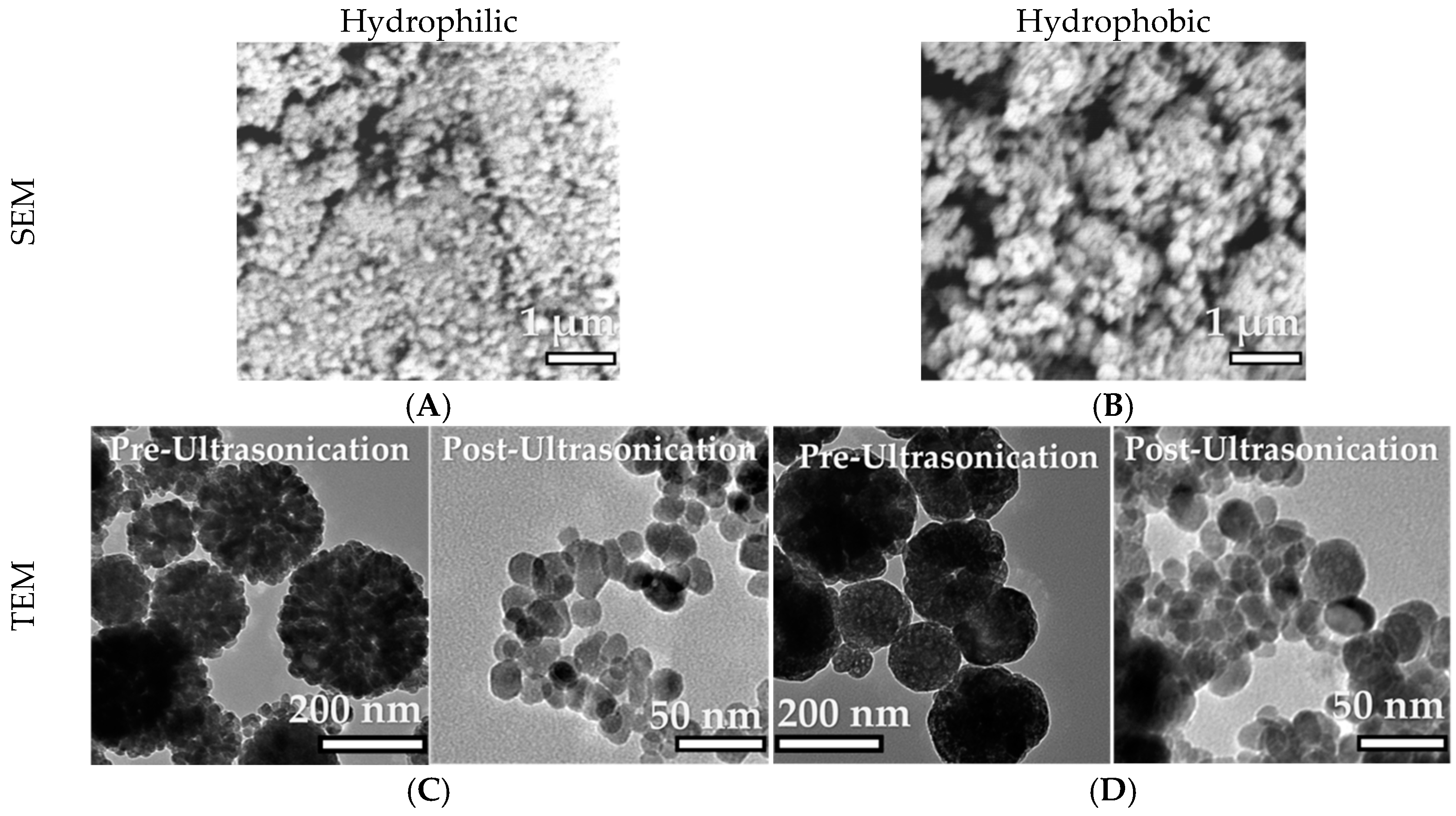 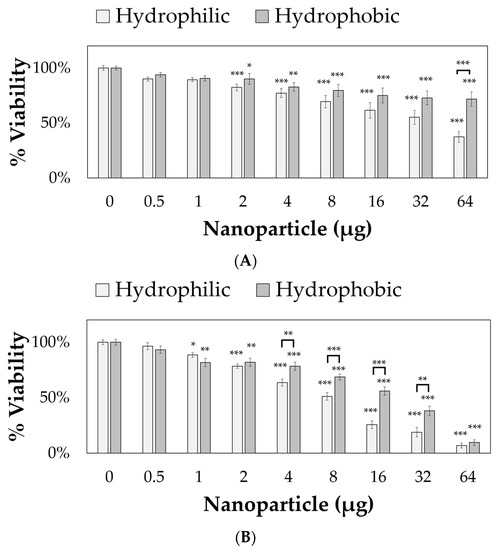 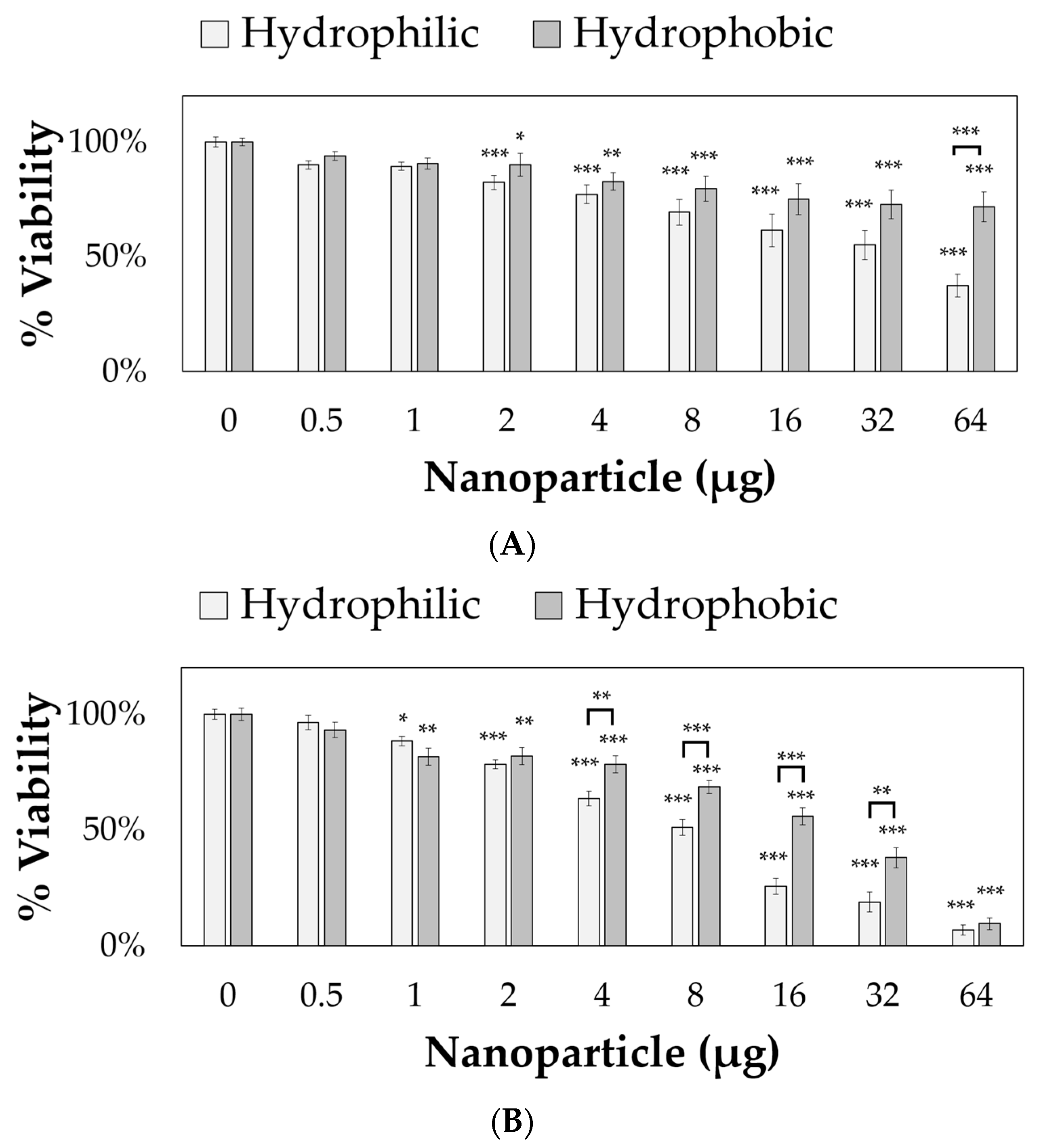 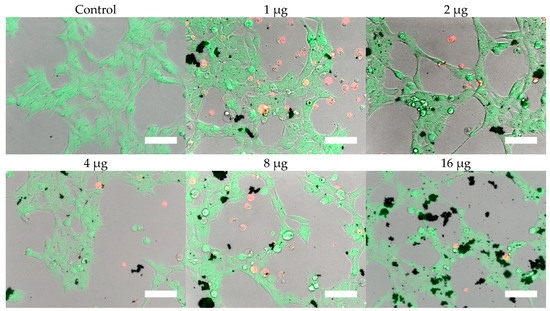 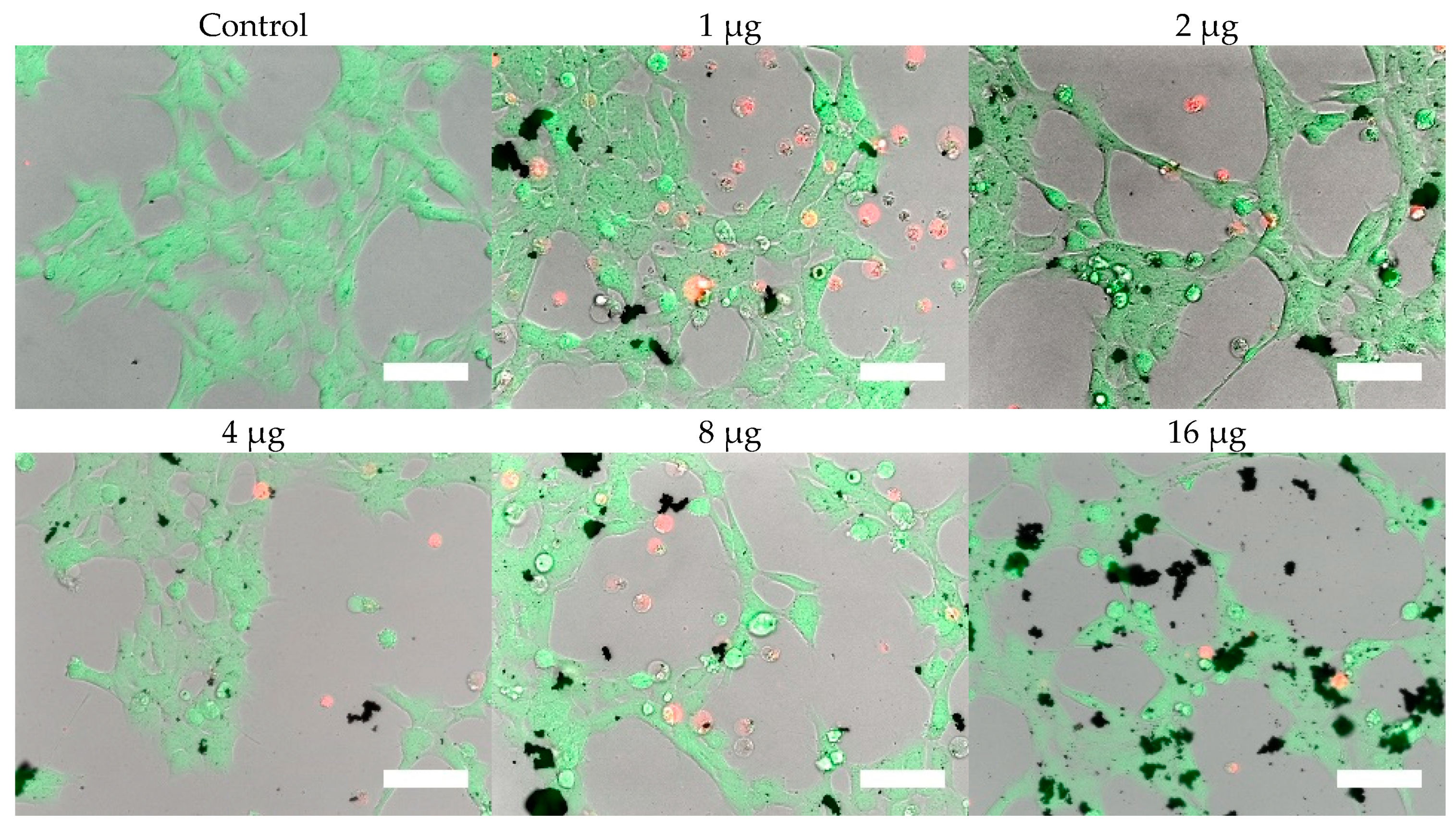 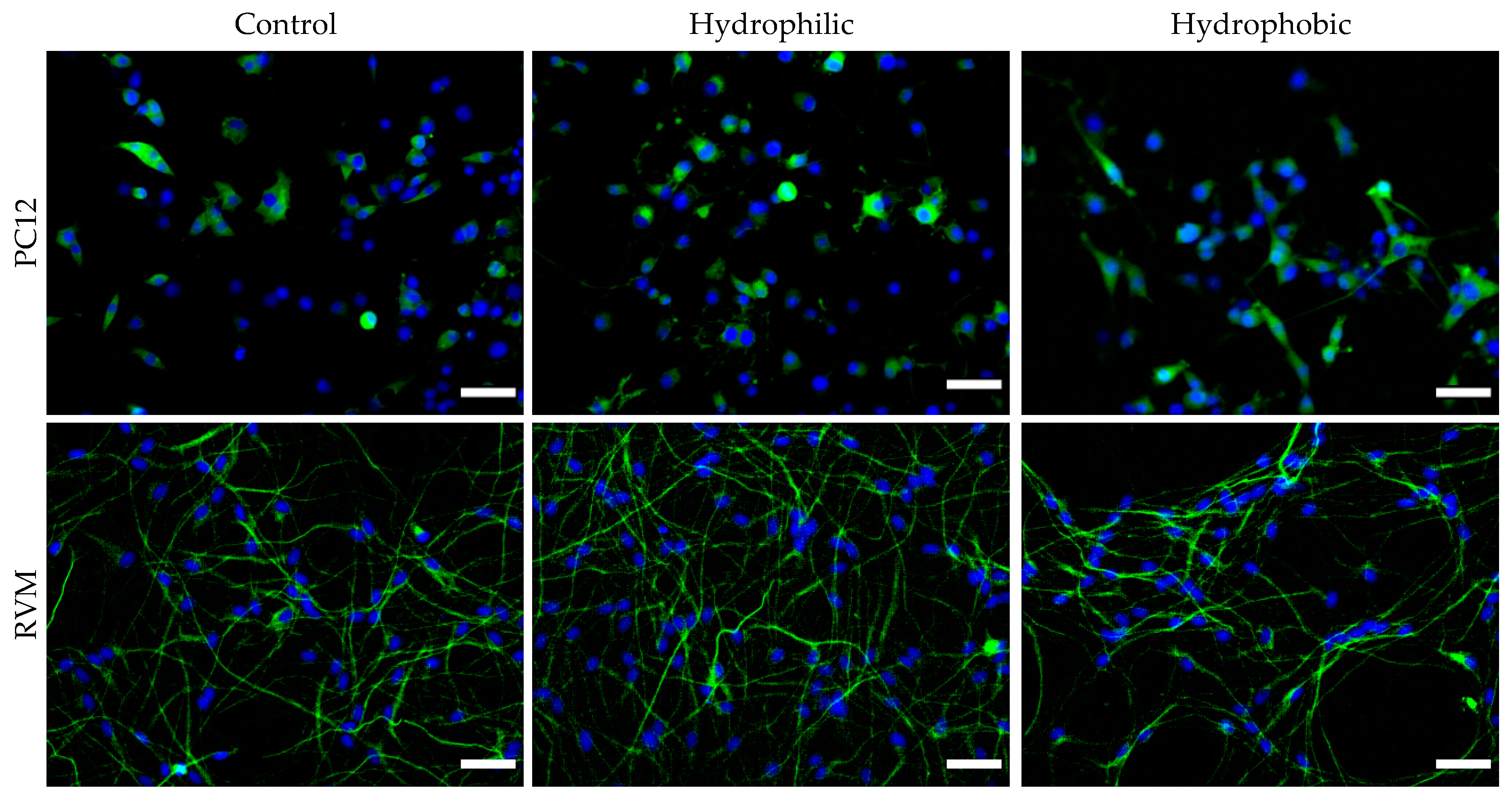 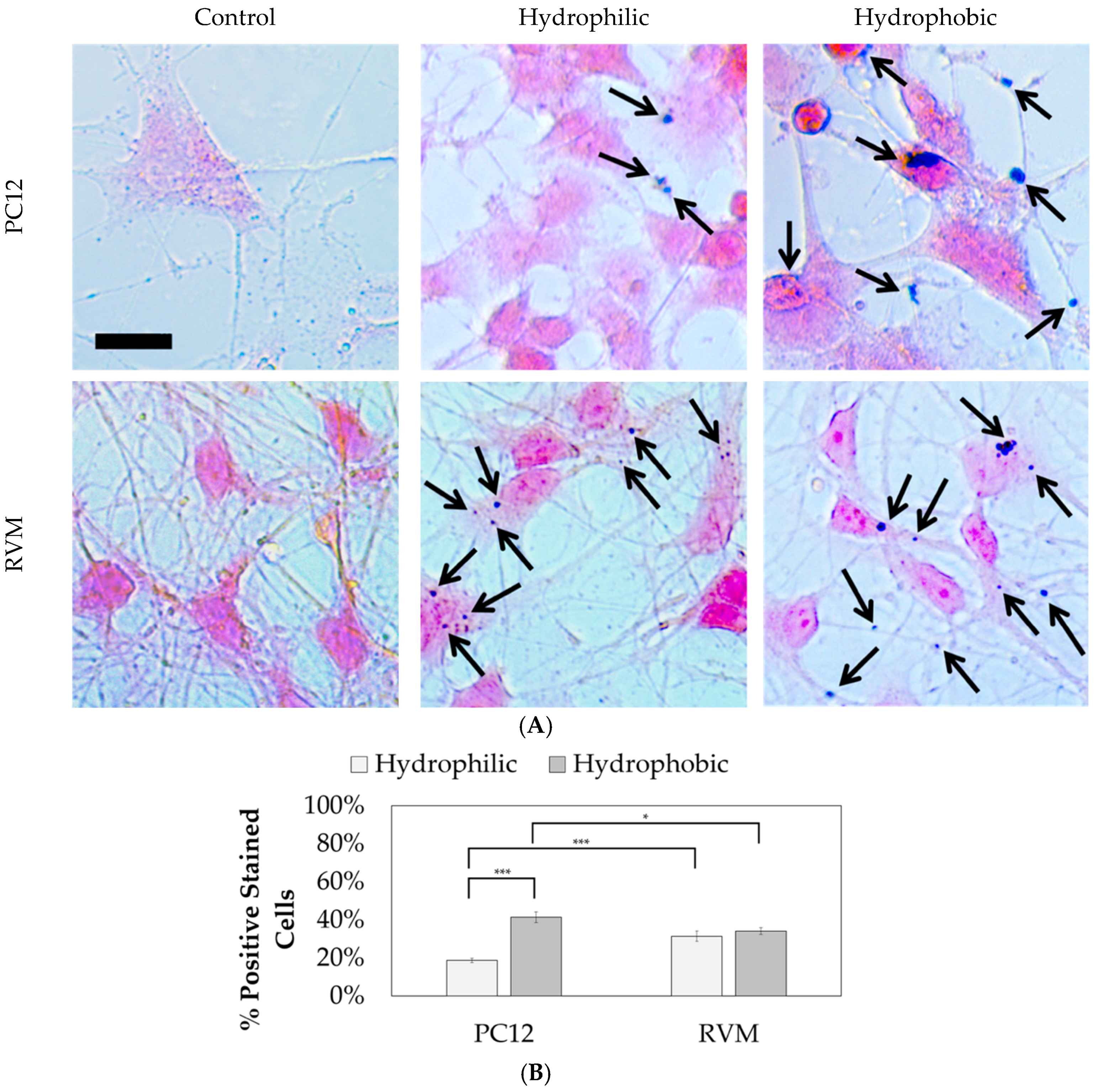 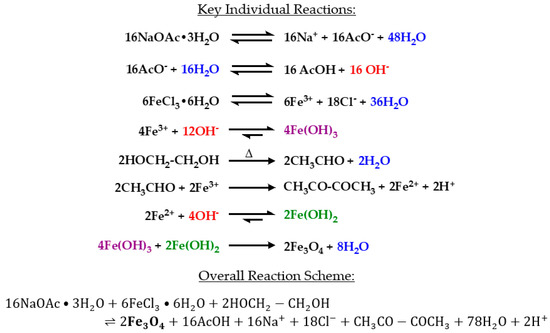 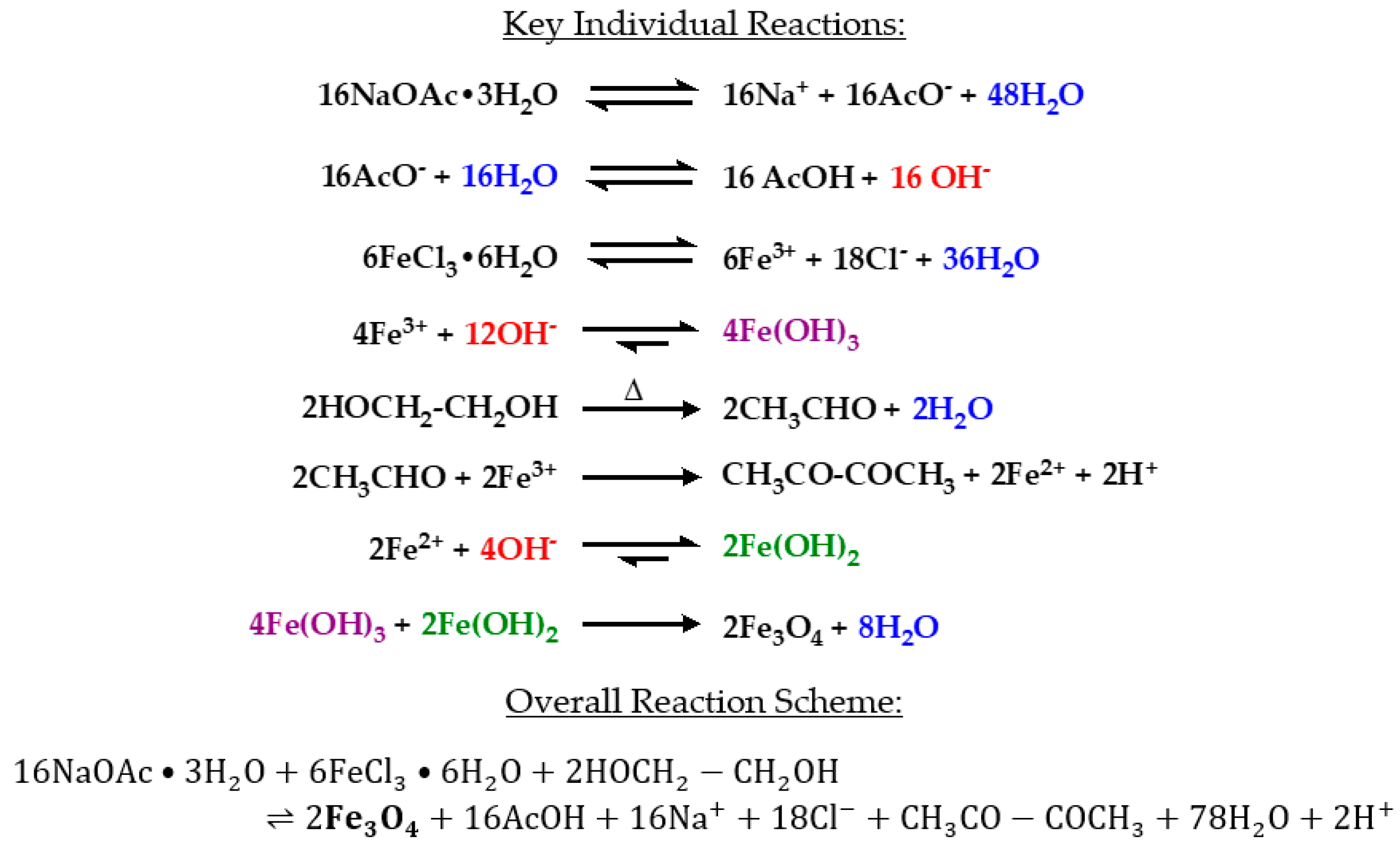