Pulse Electrodeposited Ni-26 at. %Mo—A Crossover from Nanocrystalline to Amorphous
Next Article in Special Issue

Waveguiding of Photoluminescence in a Layer of Semiconductor Nanoparticles

Semiconductor nanoparticles (SNPs), such as quantum dots (QDs) and core/shell nanoparticles, have proven to be promising candidates for the development of next-generation technologies, including light-emitting diodes (LEDs), liquid crystal displays (LCDs) and solar concentrators. Typically, these applications use a sub-micrometer-thick film of SNPs to realize photoluminescence. However, our current knowledge on how this thin SNP layer affects the optical efficiency remains incomplete. In this work, we demonstrate how the thickness of the photoluminescent layer governs the direction of the emitted light. Our theoretical and experimental results show that the emission is fully outcoupled for sufficiently thin films (monolayer of SNPs), whereas for larger thicknesses (larger than one tenth of the wavelength) an important contribution propagates along the film that acts as a planar waveguide. These findings serve as a guideline for the smart design of diverse QD-based systems, ranging from LEDs, where thinner layers of SNPs maximize the light outcoupling, to luminescent solar concentrators, where a thicker layer of SNPs will boost the efficiency of light concentration.
Keywords: nanooptics; anisotropic emission; light waveguiding; quantum dots; LED; solar concentrators nanooptics; anisotropic emission; light waveguiding; quantum dots; LED; solar concentrators

A growing demand for sustainable energy development stimulates the ongoing search for new materials and engineering designs that will improve the performance of modern technologies. Semiconductor nanoparticles (SNPs) are attractive nanomaterials that could help to diminish the energy losses and maximize the efficiency of different devices, including light-emitting diodes (LEDs) [1], displays [2,3] and solar concentrators [4]. These light-emitting technologies usually require the deposition of a thin layer of colloidal SNPs on a substrate in order to deploy their optical and electrical properties efficiently. For instance, present quantum dot (QD)-based displays and LEDs have a multilayered structure of SNPs with thicknesses in the order of tens of nanometers, which enables bright and color-saturated emission [5]. Other QD applications, such as solar concentrators, utilize SNPs as sunlight collectors suspended in a polymer slab, which waveguides the down-converted light towards the solar cells by total internal reflection (TIR). However, the efficiency of all these light-generating systems still suffers from uncontrollable light outcoupling or waveguiding. Particularly, for LEDs and displays this may result in up to 50–95% photon losses, due to reduced light outcoupling, undesirable waveguiding or coupling to surface plasmon modes near metal electrodes [1]. In addition, for solar concentrators based on spherical QDs, the maximum attainable fraction of guided emission may achieve only 74% due to photons outcoupling out of the TIR cone angle [6]. Therefore, there is a growing need to understand the underlying mechanisms that govern the direction of the emitted light in order to enhance the efficiency of QD-based devices.
In this work, we aim to obtain deeper insights as to how the thickness of SNP film impacts the outcoupling and waveguiding of the emitted light. Over the past few decades, models have been developed to study nanostructured systems, following the approaches of Maxwell-Garnett or Bruggeman [7,8,9]. These methods describe a complex structure by introducing an equivalent homogeneous medium, which leads to an effective dielectric constant εeff. These theoretical frameworks can be used effectively to study light absorption or scattering by this medium [10]. However, these approaches are appropriate when the volume fraction of nanoparticles is small, and important corrections are necessary when the fraction increases above 20%. In this work we consider the case of a single layer or a multilayer of nanoparticles in which the volume fraction of particles can be significantly higher than 20%. This case is very relevant, because nanoparticles are often deposited in multilayers with high packing density. We first evaluate the magnitude of the dielectric depolarization effect and its effect on the anisotropy for absorption by layered SNPs. We then carry out detailed static field calculations and use these to obtain the effective thickness deff of an equivalent layer of homogeneous material. The latter parameter is then used to calculate the emission from a dipole emitter embedded in a QD layer as proposed in some reports [11,12,13,14]. In Section 3 we show how the effective thickness allows estimation of the effect of the film thickness on the light outcoupling and waveguiding. The main result of this work is that monolayers, or very thin layers of QDs, lead to negligible waveguiding and most of the photoluminescent emission is outcoupled, while thicker layers lead to stronger waveguiding. To verify the validity of our proposed model, we provide a set of fluorescence microscopy experiments for very thin layers and for somewhat thicker layers of CdSe/CdS core/shell nanocrystals. Finally, we also discuss how the thickness of a QD film can improve the efficiency of light-generating devices, such as LEDs, displays and solar concentrators.

The full analytical framework can be found in the Supplementary Materials.

To calculate the absorption properties of a stack of SNPs, we applied the quasistatic approximation based on COMSOL Multiphysics 5.3 (Electrostatics module). For the squared or triangular packing of SNPs, a spherical particle with dielectric constant εp = 6εo (CdS [15] for a free space wavelength λo = 500 nm) was enclosed within a 3D square or hexagonal prism unit cell (Figure S1a) with dielectric constant of the surrounding medium εm, which varied between εo and 6εo. To simulate the interaction of a homogeneous external electric field Ee with an infinitely extended SNP layer, we solved the static potential problem ∇(ε⋅∇V) = 0 with appropriate boundary conditions. For the faces parallel to the external field, Neumann boundary conditions were used. For the faces perpendicular to the external field, a Dirichlet boundary condition with constant voltage was used. For faces that made an angle with the external field, the Dirichlet condition V(r) = −Ee∙r was used. The tetrahedral mesh of the geometry (Figure S1b) was generated with a maximum element size dSNP/15 and a maximum element growth factor of 1.25. The values βij(r) were calculated as a ratio of the ith component of the internal electric field Ei(r) over the amplitude of the applied external field Ej. The obtained values were used to calculate the absorption anisotropy aσ and the effective thickness deff according to the Equations (2) and (6), respectively.

To simulate the wave propagation within the layer of SNPs, we employed the commercial full-wave finite-element solver COMSOL Multiphysics 5.3 (Wave Optics module). The designed 2D model geometry and corresponding mesh are shown in Figure S1. The stack of semiconductor nanowires (aligned towards the viewer) or equivalent slab with effective thickness deff were embedded inside the dielectric medium enclosed with perfectly matched layers (PMLs), which absorbed the outgoing radiation. The emission of the quantum dot was modelled as a point dipole emitter (PDE) placed in the center of the geometry and oriented out of the geometry plane. The entire geometry was meshed with triangular elements, which had a maximum element size of dSNP/12 and element growth rate 1.3. The angular emission patterns in the far field were calculated at the far-field boundary (FFB) and normalized to the maximum field amplitude obtained for the considered examples.

2.5. Fabrication and Characterization of SNP Films

2.6. Microscopy Imaging of the Samples

The samples were visualized with a custom-built fluorescence microscope shown in Figure 2a. A blue LED (C503B-BCS-CV0Z0461, Durham, NC, USA) with a peak wavelength of 470 nm was used as an excitation source (power Pout = 265 μW) and focused with a 10× objective lens (Plan Fluor, NA 0.30, Nikon, Tokyo, Japan) on the sample placed on a piezoactuator stage (Tritor 102SG, PiezoSystemJena, Jena, Germany). The QD emission was collected with a 100× oil-immersion objective lens (Plan Fluor, NA 1.30, Nikon, Japan, Tokyo) from the substrate side and split between a complementary metal oxide semiconductor (CMOS) camera (Andor Zyla 4.2, sCMOS, Oxford Instruments, Oxford, UK) with an acquisition rate of 10 Hz and a single-photon counting module (SPCM-ARQH-15, Excelitas Technologies, Wiesbaden, Germany) with an integration time of 10 ms. The excitation light was blocked with a band-pass filter (ET542lp, Chroma, Bellows Falls, VT, USA) while the emission was integrated over the area of a slit (50 μm × 1 mm, S50RD, Thorlabs, Newton, NJ, USA), aligned parallel to the film edge. The acquired photon counts were averaged with a sliding bin size of 250 ms.

In conclusion, this work has demonstrated how the thickness of SNP films governs the emission of layered nanostructures. The presented theoretical framework shows that SNP monolayers have the highest outcoupling of emitted photons into the surrounding medium, whereas thick multilayered structures guide most of the photoluminescence towards the edges. These results have been confirmed with the set of experiments based on microscopic fluorescence imaging. The observed light phenomena for the layered SNP nanostructures unlock great potential to improve the efficiency and performance of diverse light-generating systems, ranging from LEDs and displays to solar concentrators and waveguides.

Part of this research work was supported by a grant from the Flemish Fund for Scientific Research (FWO project G09201N). 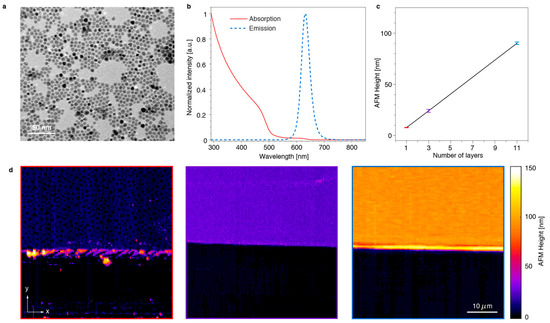 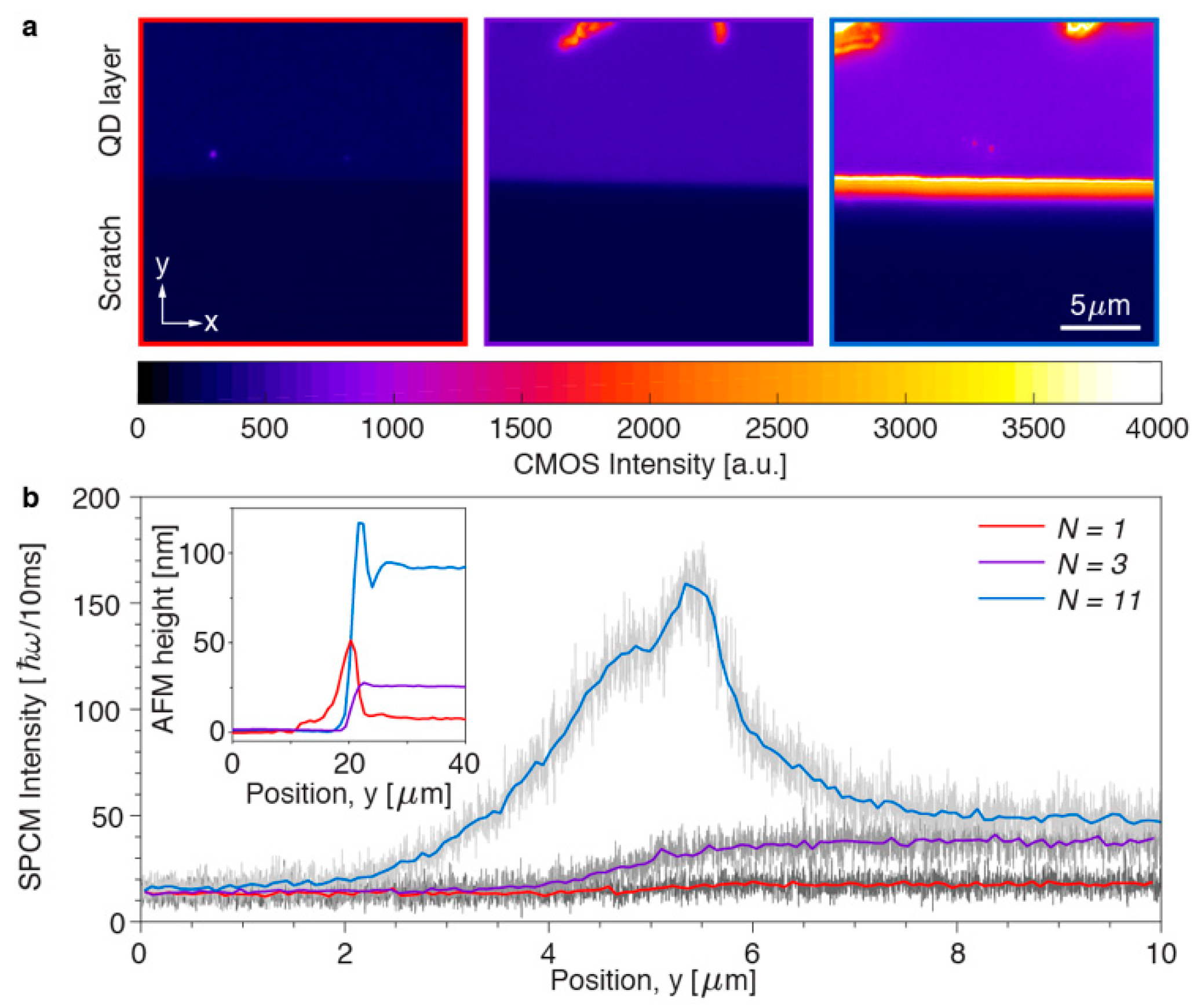 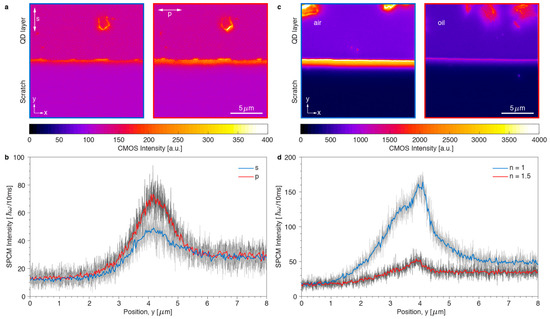