:
Silicon nanowires (Si NWs) are emerging as an innovative building block in several fields, such as microelectronics, energetics, photonics, and sensing. The interest in Si NWs is related to the high surface to volume ratio and the simpler coupling with the industrial flat architecture. In particular, Si NWs emerge as a very promising material to couple the light to silicon. However, with the standard synthesis methods, the realization of quantum-confined Si NWs is very complex and often requires expensive equipment. Metal-Assisted Chemical Etching (MACE) is gaining more and more attention as a novel approach able to guarantee high-quality Si NWs and high density with a cost-effective approach. Our group has recently modified the traditional MACE approach through the use of thin metal films, obtaining a strong control on the optical and structural properties of the Si NWs as a function of the etching process. This method is Complementary Metal-Oxide-Semiconductors (CMOS)-technology compatible, low-cost, and permits us to obtain a high density, and room temperature light-emitting Si NWs due to the quantum confinement effect. A strong control on the Si NWs characteristics may pave the way to a real industrial transfer of this fabrication methodology for both microelectronics and optoelectronics applications.
Keywords:
silicon nanowires; MACE (metal-assisted chemical etching); photoluminescence; photonics

Standard 4” commercial Si wafer (100) and (111)-orientation and with n-type or p-type doping (resistivity ~ 1–5 Ω·cm) and 500 μm of thickness were purchased from Siegert Wafer (Aachen, Germany). Hydrofluoric acid (HF) 40% was obtained by Honeywell (Charlotte, NC, USA), while hydrogen peroxide (H2O2) was obtained from by Sigma-Aldrich (Darmstadt, Germany). The watery solutions were prepared by using by Milli-Q Deionized water (resistivity ~ 18 MΩ·cm).

Si NWs were fabricated through the use of the thin film Metal-Assisted Chemical Etching (MACE). First of all, native silicon oxide was etched by a watery solution of 2.5M of HF. Subsequently, a thin metal film of 2 nm of Au or 10 nm of Ag was deposited onto the cleaned substrates by an Electron Beam Evaporator (EBE, modified-KS1000SA, Kenosistec, Binasco, Italy) in a high vacuum condition (<10−6 mbar) and at room temperature. The samples were then immersed in an aqueous solution of HF (5M) and H2O2 (0.44M). The metal (Au or Ag) is more electronegative than Si and extract electrons (or inject holes) from the Si substrate that is oxidized by the hydrogen peroxide. The hydrofluoric acid selectively etch the SiO2 formed under the metal. Anisostropic etching happens under the metal mask and the Si NWs are formed in the unetched silicon regions. Finally, the metal can be simply removed by a gold etchant (KI solution) or a HNO3 solution for Au or Ag, respectively. All the etching is performed at room temperature and previous studies demonstrate the absence of Au or Ag contamination inside the silicon [39].

Structural analysis of the fabricated Si NWs was performed by a field-emission Scanning Electron Microscope (SEM, Gemini Supra 25, Zeiss, Oberkochen, Germany). The photoluminescence (PL) spectra were obtained by exciting the NWs with the 364 nm line of an Ar+ laser through a 100x (NA = 0.9) objective and a power of about 100 µW onto the sample plane if it is not differently specified. The signal is collected in back scattering configuration through the same objective, spectrally decomposed by a 600 L/mm grating, and acquired by a Peltier −70°C cooled CCD (Synapse).

All the linear best fits reported here show a Pearson coefficient higher than 0.98, demonstrating good linear trend behavior. The length measurement for the etching rate as well as the optical properties in terms of Photoluminescence (PL) emission were obtained as the average value on several (3 at least) NWs samples and for each of them in different points of the sample. This statistic permitted to obtain the reported error bars on the measurements. Both the linear fit and the Gaussian one are obtained through the Origin software libraries.
The PL signals as a function of the power are shown for simplicity in power density considering the measured laser spot. The laser pump fluency reported (photon flux for area and time unit, used in Figure 4d) takes into account a continue laser source and the laser wavelength of 364 nm with the following equation: where λ is the wavelength, h the Planck constant, and c the speed of light velocity.

In this paper, a detailed study of the structural and optical characteristic of ultrathin Si NWs is reported as a function of the etching process parameters. This modified approach surpasses the limit of the traditional MACE method through the use of thin metal films, permitting us to obtain RT, light- emitting Si NWs. This method is CMOS-technology compatible, low-cost, and permits one to obtain a high density of Si NWs with perpendicular or tilted orientation as a function of the substrate crystalline orientation and the metal used in fixed solution concentration. Indeed, for the case of (111)-oriented substrate, the obtained Si NWs results are 50 degree tilted with respect to the substrate plane by changing the catalyst from the 2 nm of gold to 10 nm of silver. The etching rate was studied by changing the doping founding a two regimes behavior with a faster etching rate in the first 5 min and a slightly slower one in the second phase. Moreover, this etching rate was to be found very similar for lightly p- or n-doped substrate (1015–1016 dopant atoms/cm3). As reported by the optical measurement, the PL was found to linearly increase with a factor of about 1.36 for each 500 nm length increase. Moreover, the PL response of this sample was studied as a function of the laser power fluency funding the typical sublinear semiconductor behavior in perfect agreement with the literature. In conclusion, the high flexibility of this approach and the strong control on the Si NWs characteristics, coupled with its low cost and compatibility with the current Si industry approaches, may pave the way to a real industrial transfer of this fabrication methodology for both microelectronics and optoelectronics applications.

A.A.L. realized the Si NWs, performed the SEM analysis and the PL measurements, analyzed and interpreted the data, and wrote the paper. M.J.L.F. realized the Si NWs, performed SEM measurements and participated in the interpretation of the data. A.I. conceived and supervised the fabrication method and the whole project, interpreted data, and participated to write the paper. All authors revised the manuscript. All authors have read and agreed to the published version of the manuscript.

The current research was founded by the project ADAS + ARS01_00459. 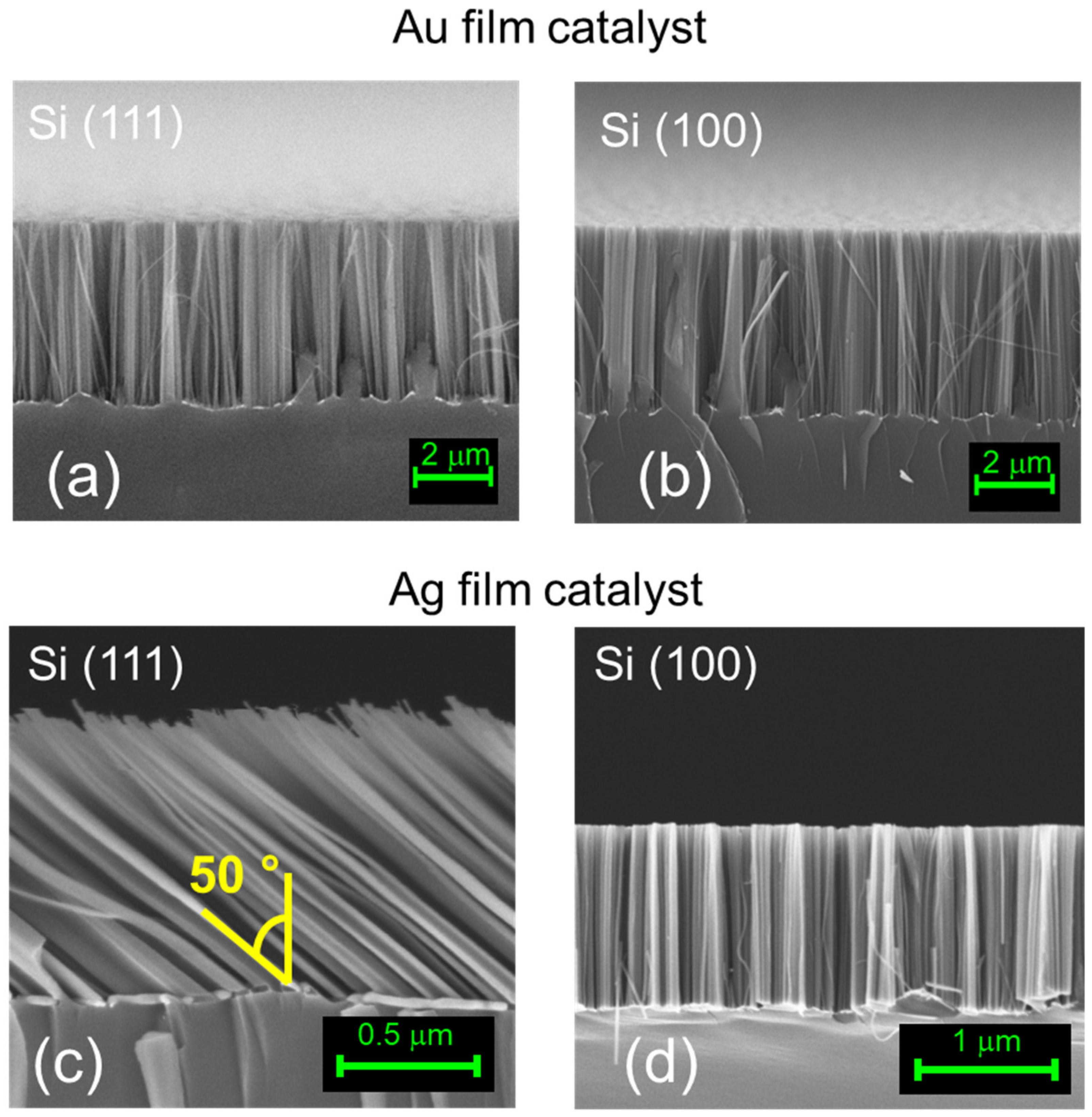