Strengthening of Wood-like Materials via Densification and Nanoparticle Intercalation

Recently, several chemical and physical treatments were developed to improve different properties of wood. Such treatments are applicable to many types of cellulose-based materials. Densification leads the group in terms of mechanical results and comprises a chemical treatment followed by a thermo-compression stage. First, chemicals selectively etch the matrix of lignin and hemicellulose. Then, thermo-compression increases the packing density of cellulose microfibrils boosting mechanical performance. In this paper, in comparison with the state-of-the-art for wood treatments we introduce an additional nano-reinforcemeent on densified giant reed to further improve the mechanical performance. The modified nanocomposite materials are stiffer, stronger, tougher and show higher fire resistance. After the addition of nanoparticles, no relevant structural modification is induced as they are located in the gaps between cellulose microfibrils. Their peculiar positioning could increase the interfacial adhesion energy and improve the stress transfer between cellulose microfibrils. The presented process stands as a viable solution to introduce nanoparticles as new functionalities into cellulose-based natural materials.
Keywords: cellulose-based nanocomposites; nanoparticles; densification; alkaline treatment; giant reed; structural modifications of natural materials cellulose-based nanocomposites; nanoparticles; densification; alkaline treatment; giant reed; structural modifications of natural materials

Nowadays, research on natural materials and their technological optimization play a fundamental role in sustainable socio-economic development [1,2]. In particular, cellulose-based materials such as wood, bamboo, reed, and natural fibers have attracted enormous attention [3,4,5,6,7], given their high versatility suitable for a variety of applications including renewable energy source, fuel, comfort, furniture, construction, and recyclable packaging [4,8,9,10]. Moreover, chemically treated wood can be turned into a transparent and conductive substrate for solar cells applications, flexible transistors, and electronics display such as liquid-crystal display (LCD) and organic light-emitting diode (OLED) [11,12]. In addition to the aforementioned applications, the most extensive utilization of timber since ancient times has been as a construction material, and it is still nowadays preferred over more modern building materials in a lot of instances due to a better life-cycle assessment, greater energy efficiency, lower costs, and near-to-zero waste by-product [13].
Wood, bamboo, and reed represent valid alternatives to steel and concrete not exclusively for socio-economic reasons but also for their structural qualities [7,14,15,16,17]. Through a combination of high strength and lightness, wood-like materials are strong competitors to modern construction materials [13]. Natural hollow materials, such as bamboo and reed, have superior tensile and flexural strength than wood [7,16,17]. Regarding these distinctive features, the exploitation of the intrinsically superior strength of hollow materials in the creation of larger and complex artefacts can generate a new strong competitor in the roster of construction materials. Nonetheless, the bare mechanical properties of bamboo are superior to those of giant reed and reed is considered to be a highly invasive and unwanted species [16,18,19,20].
The first historical records of the use of giant reed (arundo donax) dates back to Ancient Greece [21]. Nowadays, limited applications use reed, i.e., biofuel [22], industrial cellulose source [21], reed wattle for structural purposes, biomimetic, and technical textiles applications [6]. Due to its high biomass productivity [22], it can be exploited as a sustainable fast-growing and low-cost material [21].
The strength of arundo donax relies on its structural composition comprising cellulose fibers and hemicellulose embedded in a lignin matrix [19]. The cross-section analysis of reed culm showed a structure with a homogeneous density of fibers, which is increased in the cortical region being more rigid [19], showing mechanical properties superior of most type of woods [17]. Giant reed has developed, similarly to bamboo [5], an optimal stem structure, which is reinforced with internodes to overcome the weakness due to its hollow and slender conformation (i.e., Euler buckling) [20]. In fact, the internodes allow the giant reed to withstand high compressive and flexural loads, which would be impossible without their presence.
This work focuses on a novel chemical and structural modification to turn giant reed into an advanced material with extremely improved mechanical properties and higher stability under challenging environmental conditions. Giant reed specimens were treated in an alkaline environment to decrease the concentration of lignin and enable densification [23,24]. The removal of lignin and thermo-compression allowed to achieve a denser material with high structural performance [24]. Porosities occur because of the delignification process. We propose to exploit even these tiny spaces, filling them up with nanoparticles to make the material tougher.
Notwithstanding, several authors investigated the effect of inorganic nanostructured materials on wood or bamboo [25,26,27,28]. In this work we propose to tailor the effects of densification by introducing selected nanostructured materials in the structure of giant reed, i.e., silicon carbide (SiC) and graphene oxide (GO). On the one hand, SiC is a well-known material for its unique mechanical strength, which was exploited to improve the mechanical properties of metals [29], polymers composites [30], and cellulose-based materials [31]. On the other hand, GO flakes were chosen for its 2D structure with high aspect ratio exposing a high concentration of hydrogen bonds [32] to the cellulose/lignin units present in the reed as GO flakes proved to effectively enhance mechanical performance in cellulose-based materials [33]. The final yield of this process can further improve the strength and toughness compared to the same densified reed. The analyses carried out highlighted a significant increase in the mechanical properties of densified samples intercalated with nanoparticles, especially regarding stiffness, strength, and toughness. The addition of nanoparticles in the densified reed resulted also in a reduced water uptake by the reed, which decreases its biodeterioration [16,34] and thus guarantees a longer lifespan. Furthermore, the densified and nanoparticles intercalation treatments strongly increased the fire-retarding properties of the native reed and the “thermo-indentation” resistance, measured by using a custom-developed technique.

In this work, we presented an innovative and simple nano-reinforcing treatment for wood-like specimens that involves densification of cellulose fibrils combined with intercalation of GO and SiC nanoparticles. In particular, the process was here tested to improve the mechanical properties of an invasive plant, giant reed, into a stronger and tougher engineering composite and can be applied to other cellulose-based materials such as wood and bamboo.
Morphological and structural characterizations, performed by using profilometer, SEM, EDX, and XPS techniques, highlighted that the treatment performed intercalated the nanoparticles inside the densified giant reed. Although, nanoparticles led to no apparent influence on the structure of the densified reed, their presence and location at the interface of CMFs resulted in a better interfacial adhesion and overall improvement in mechanical performance, both for tensile and flexural properties. Indeed, the mechanical properties of the nanocomposite increase with respect to both the untreated and densified reed. The nanocomposite modified giant reed has a 1/15 of the elastic modulus and more than 1/2 of the strength of mild steel while having just 1/7 of its density. Further analysis highlighted that the nanoparticle intercalation in the densified reed enhanced the specific toughness modulus while this does not occur with the densification treatment alone. This result is due to the role played by nanoparticles during the relative sliding between cellulose microfibrils inside the material. A mechanical effect coupled with an increase in the chemical interaction could be at the root of this phenomenon. Indeed, the densification treatment involves the formation of a high number of hydrogen bonds between CMFs. The amount of these bonds could further increase by adding nanoparticles in the voids of the densified structure, especially with GO, which is rich in hydroxyl and carbonyl groups in its surface. Additionally, an increase in adhesion energy, that was estimated to be higher for SiC nanoparticles than GO, could induce an increase stress transfer between cellulose microfibrils. Further investigations were performed to evaluate thermo-indentation and burning response of the materials. SiC and GO-densified giant reed have strongly increased fire-retarding and thermo-indentation resistances compared to the native reed. Moreover, the addition of nanoparticles in the densified reed resulted in a reduced water uptake, which can decrease its bio-deterioration and thus guarantee a longer lifespan when applied as a structural material. The versatility of this innovative treatment can be exploited to improve the mechanical properties of any kind wood-like structure. In conclusion, the nano-reinforcing densification treatment proposed in this work sheds a new insight into the possible enhancements of timber properties. 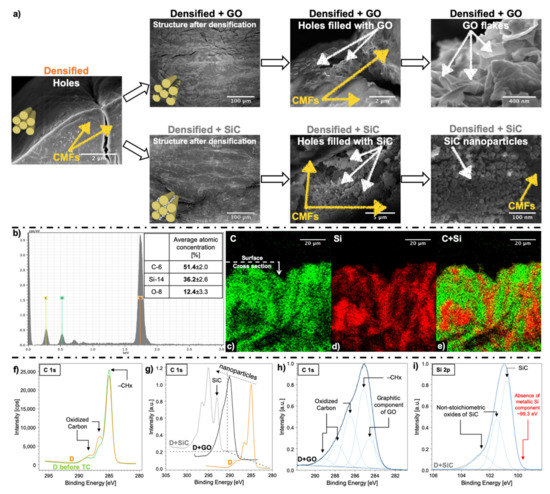 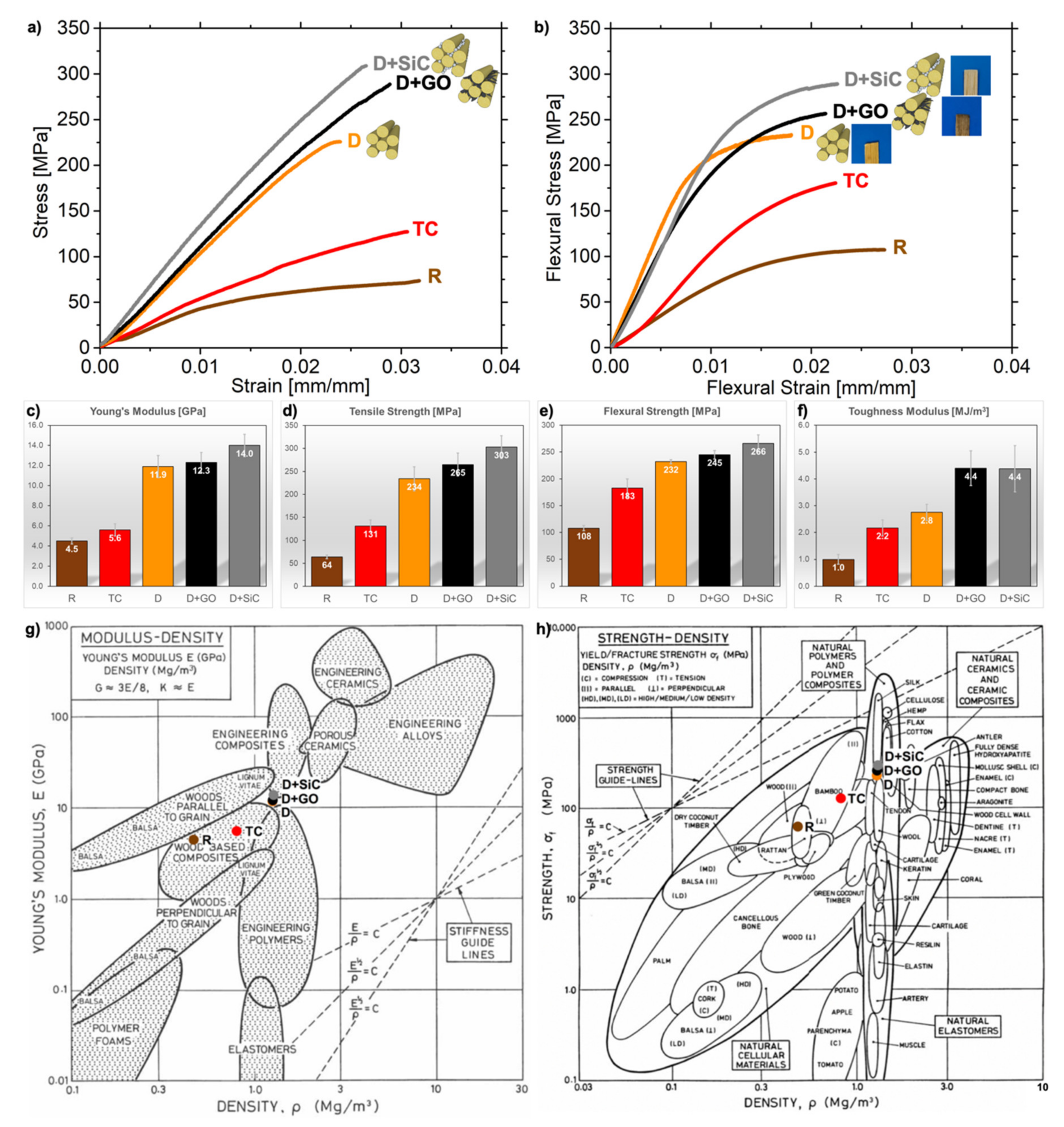 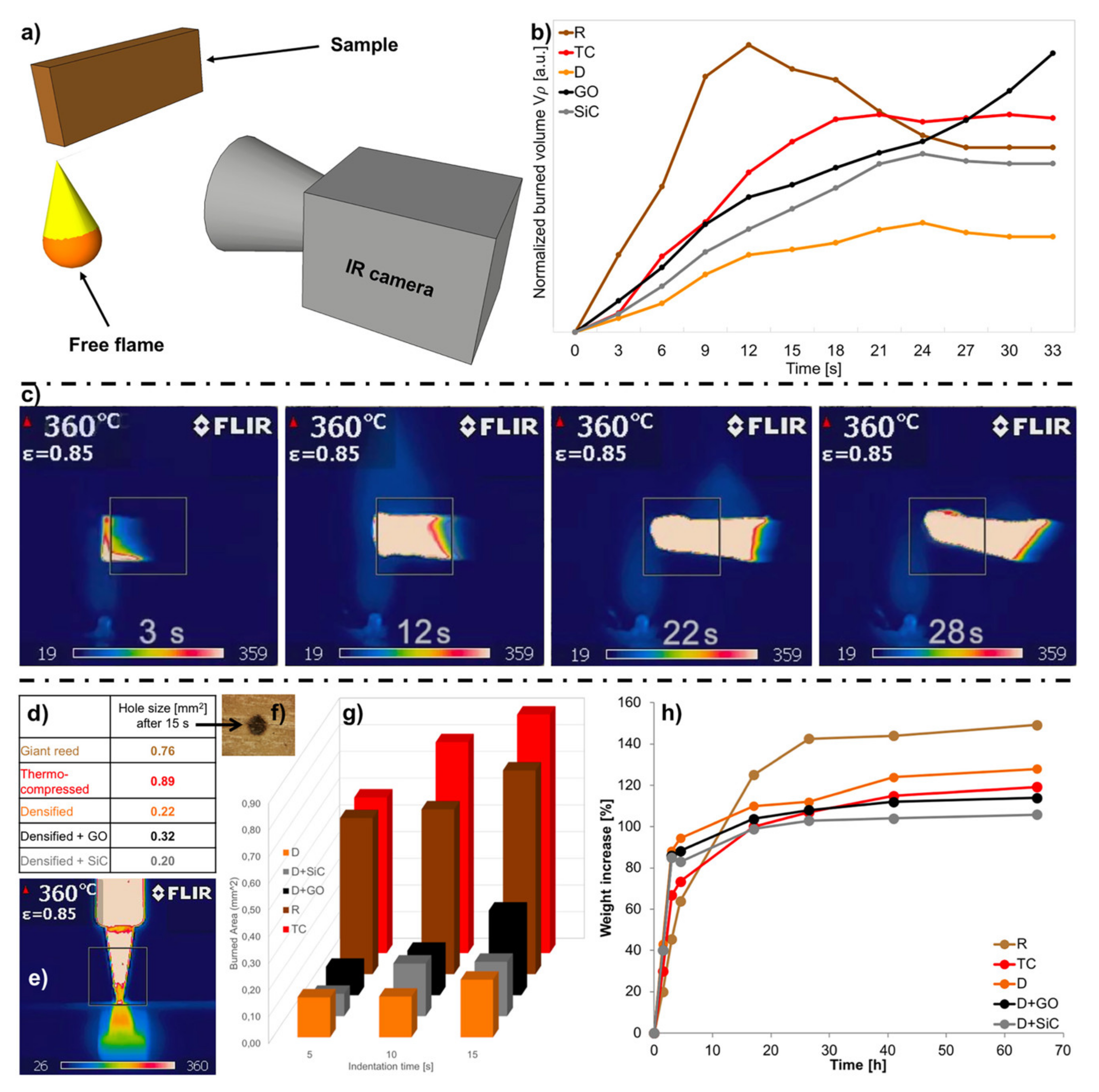