The metabolic activity in plants or fruits is associated with volatile organic compounds (VOCs), which can help identify the different diseases. P-ethylphenol has been demonstrated as one of the most important VOCs released by the Phytophthora cactorum (P. cactorum) infected strawberries. In this study, a bioelectronic nose based on a gas biosensor array and signal processing model was developed for the noninvasive diagnostics of the P. cactorum infected strawberries, which could overcome the limitations of the traditional spectral analysis methods. The gas biosensor array was fabricated using the single-wall carbon nanotubes (SWNTs) immobilized on the surface of field-effect transistor, and then non-covalently functionalized with different single-strand DNAs (ssDNA) through π–π interaction. The characteristics of ssDNA-SWNTs were investigated using scanning electron microscope, atomic force microscopy, Raman, UV spectroscopy, and electrical measurements, indicating that ssDNA-SWNTs revealed excellent stability and repeatability. By comparing the responses of different ssDNA-SWNTs, the sensitivity to P-ethylphenol was significantly higher for the s6DNA-SWNTs than other ssDNA-SWNTs, in which the limit of detection reached 0.13% saturated vapor of P-ethylphenol. However, s6DNA-SWNTs can still be interfered with by other VOCs emitted by the strawberries in the view of poor selectivity. The bioelectronic nose took advantage of the different sensitivities of different gas biosensors to different VOCs. To improve measure precision, all ssDNA-SWNTs as a gas biosensor array were applied to monitor the different VOCs released by the strawberries, and the detecting data were processed by neural network fitting (NNF) and Gaussian process regression (GPR) with high accuracy. View Full-Text
Keywords: bioelectronic nose; FET; ssDNA; SWNT; gas sensor; Phytophthora cactorum; volatile organic compounds; strawberry bioelectronic nose; FET; ssDNA; SWNT; gas sensor; Phytophthora cactorum; volatile organic compounds; strawberry
►▼ Show Figures 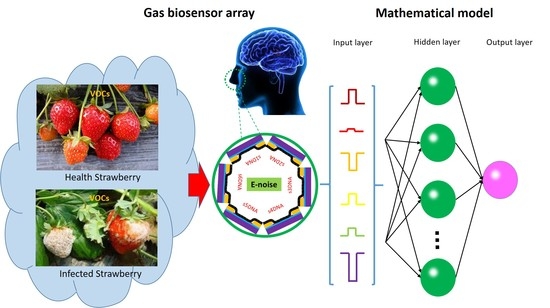