Symmetries in Genetic Systems and the Concept of Geno-Logical Coding

Recent advances in neuronal multisensory integration suggest that the five senses do not exist in isolation of each other. Perception, cognition and action are integrated at very early levels of central processing, in a densely-coupled system equipped with multisensory interactions occurring at all temporal and spatial stages. In such a novel framework, a concept from the far-flung branch of topology, namely the Borsuk-Ulam theorem, comes into play. The theorem states that when two opposite points on a sphere are projected onto a circumference, they give rise to a single point containing their matching description. Here we show that the theorem applies also to multisensory integration: two environmental stimuli from different sensory modalities display similar features when mapped into cortical neurons. Topological tools not only shed new light on questions concerning the functional architecture of mind and the nature of mental states, but also provide an empirically assessable methodology. We argue that the Borsuk-Ulam theorem is a general principle underlying nervous multisensory integration, resulting in a framework that has the potential to be operationalized. View Full-Text
Keywords: multimodal; heteromodal; integration; neuron; brain; Borsuk-Ulam theorem; antipodal multimodal; heteromodal; integration; neuron; brain; Borsuk-Ulam theorem; antipodal
►▼ Show Figures 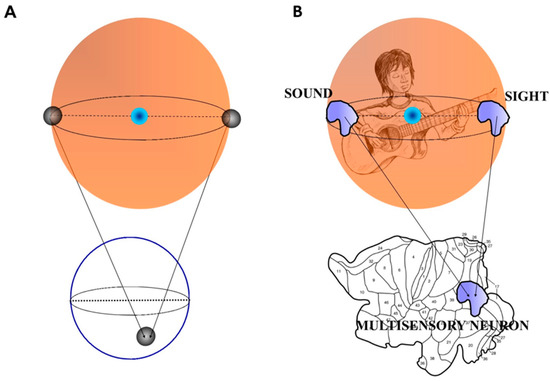