Influence of Iron-Enriched Biochar on Cd Sorption, Its Ionic Concentration and Redox Regulation of Radish under Cadmium Toxicity
Previous Article in Journal

Phenolics and Antioxidant Activity of Green and Red Sweet Peppers from Organic and Conventional Agriculture: A Comparative Study

Precision and Digital Agriculture: Adoption of Technologies and Perception of Brazilian Farmers

The rapid population growth has driven the demand for more food, fiber, energy, and water, which is associated to an increase in the need to use natural resources in a more sustainable way. The use of precision agriculture machinery and equipment since the 1990s has provided important productive gains and maximized the use of agricultural inputs. The growing connectivity in the rural environment, in addition to its greater integration with data from sensor systems, remote sensors, equipment, and smartphones have paved the way for new concepts from the so-called Agriculture 4.0 or Digital Agriculture. This article presents the results of a survey carried out with 504 Brazilian farmers about the digital technologies in use, as well as current and future applications, perceived benefits, and challenges. The questionnaire was prepared, organized, and made available to the public through the online platform LimeSurvey and was available from 17 April to 2 June 2020. The primary data obtained for each question previously defined were consolidated and analyzed statistically. The results indicate that 84% of the interviewed farmers use at least one digital technology in their production system that differs according to technological complexity level. The main perceived benefit refers to the perception of increased productivity and the main challenges are the acquisition costs of machines, equipment, software, and connectivity. It is also noteworthy that 95% of farmers would like to learn more about new technologies to strengthen the agricultural development in their properties.
Keywords: agriculture 4.0; smart farming; farmer’s attitudes; Brazil agriculture 4.0; smart farming; farmer’s attitudes; Brazil

For the researcher’s methodological definition, it was based on aspects applied: (i) in the evaluation of the factors of adoption of remote sensing images in the precision management of cotton producers in the United States [34]; (ii) in assessing the adoption and future prospects of precision agriculture in Germany [35]; (iii) in who evaluated the adoption of precision agriculture technologies in the sugarcane sector in Brazil [29], (iv) in who evaluated the adoption of precision agriculture under the perception of farmers and service providers in Brazil [30], and (v) in who evaluated different perspectives of American rural producers regarding the benefits of precision agriculture [26]. From the bibliographic references and the experience of the project team in the Brazilian context, specific questions were established, addressing aspects with the possibility of multiple choice answers on the technologies in precision agriculture and digital agriculture used in different complexity of applications (Table 1), among them in different sectors of agriculture and profiles of rural producers, added to perceptions of benefits, challenges and future expectations in Brazilian agriculture.
The questionnaire was prepared, organized, and made available to the public through the online platform LimeSurvey under the registration number 25889/2020 [38]. The system was available from 17 April to 2 June 2020, allowing answers to be collected based on specific questions previously defined (Table 2). The based used for the sample the research, was the Mailing List of Embrapa (Brazilian Agricultural Research Corporation, Campinas, Brazil) and Sebrae (Brazilian Micro and Small Business Support Service, Brasília, Brazil), agricultural cooperatives and associations of rural producers. A similar approach to sample respondents was applied in [30]. An “invitation message” was sent explaining the objectives with an access link and other guidelines to those interested in voluntarily participating in this online survey.
The primary data obtained for each question (single choice, multiple choice, and matrix questions) and its respective complete answers were consolidated in a LimeSurvey platform report and later exported in csv and included in a spreadsheet. Subsequently, statistics were generated based on absolute frequency data and graphs representative of the relative frequency represented by the percentages of each of the variables associated with the survey questions. Considering the size of the sample population of rural properties in Brazil approximately 1.5 million farmers in the survey profile, [39], it was stipulated to reach at least 385 questionnaires answered in full to obtain up to 5% margin of error with a 95% reliability level. However, results were gathered for 504 farmers (0.03% of population), a higher response rate than originally expected.

The digital agriculture can be understood as a set of technologies for communication, information, and analysis that allows farmers to plan, monitor, and manage the operational and strategic activities of the agriculture production systems, from pre-production, in production, and post-production. The results observed in the survey indicate that 84% of the Brazilian farmers interviewed use at least one digital technology in their production system, and this percentage decreases as the level of the application’s technological complexity increases. Connectivity, mobile apps, digital platforms, software, global satellite positioning systems, remote sensing, and field sensors are the main technologies used.
Brazilian farmers’ main perceptions in relation to benefits are linked to increased productivity, product higher selling potential, better planning, and management of production systems, 95% of farmers would like to learn more about new technologies and strengthen its applications. The use of such digital technologies has the potential to increase the sustainable management of natural resources (soil and water) and to reduce the use of agricultural inputs, making agricultural areas more productive and reducing their environmental impact. However, important difficulties to amplify its use were pointed out. The cost of purchasing machines, equipment and applications, problems with/or lack of connectivity in rural areas were the main issues presented. It is suggested that future studies focus on the new research questions from this work, more specifically on farmers’ social and economic behavior towards adoption of new technologies and whether the adopters have a competitive advantage compared to non-adopters. Further research could also consider the way technology adoption will occur by the new generation, accordingly to the level of Internet access in the rural areas and hoping that they will continue to run the family business.

This research article is part of a project that has received funding from the Brazilian Micro and Small Business Support Service (SEBRAE) and Brazilian Agricultural Research Corporation-Secretariat of Innovation and Business (EMBRAPA) under grant agreement Nº 10200.18/0083-3. The opinions expressed in the article reflect only the authors’ view. 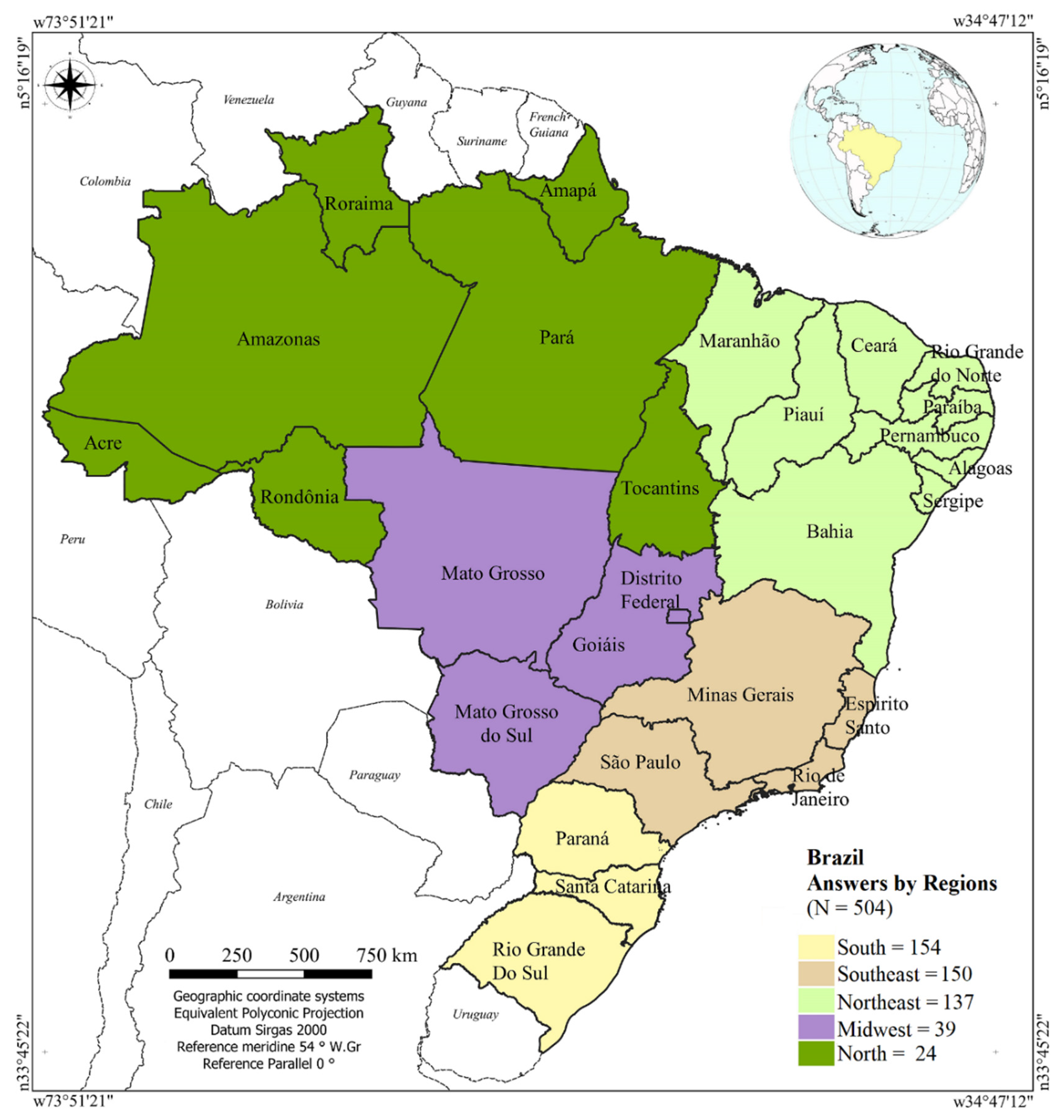 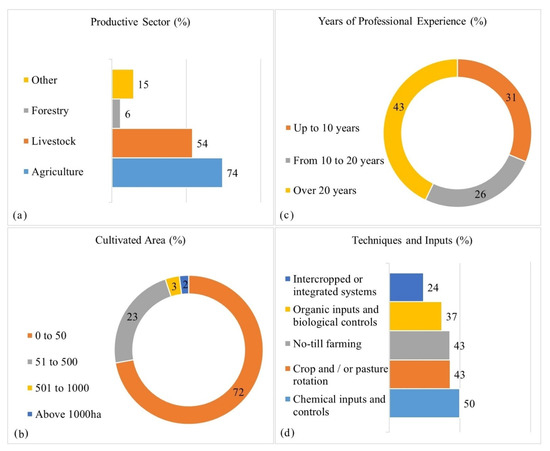 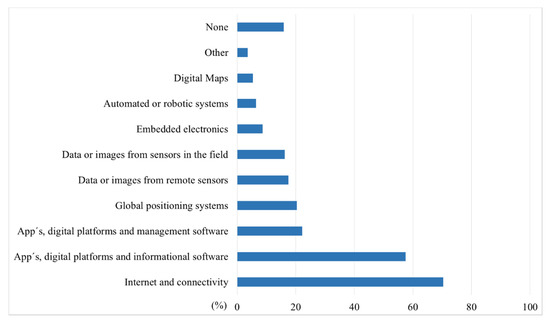 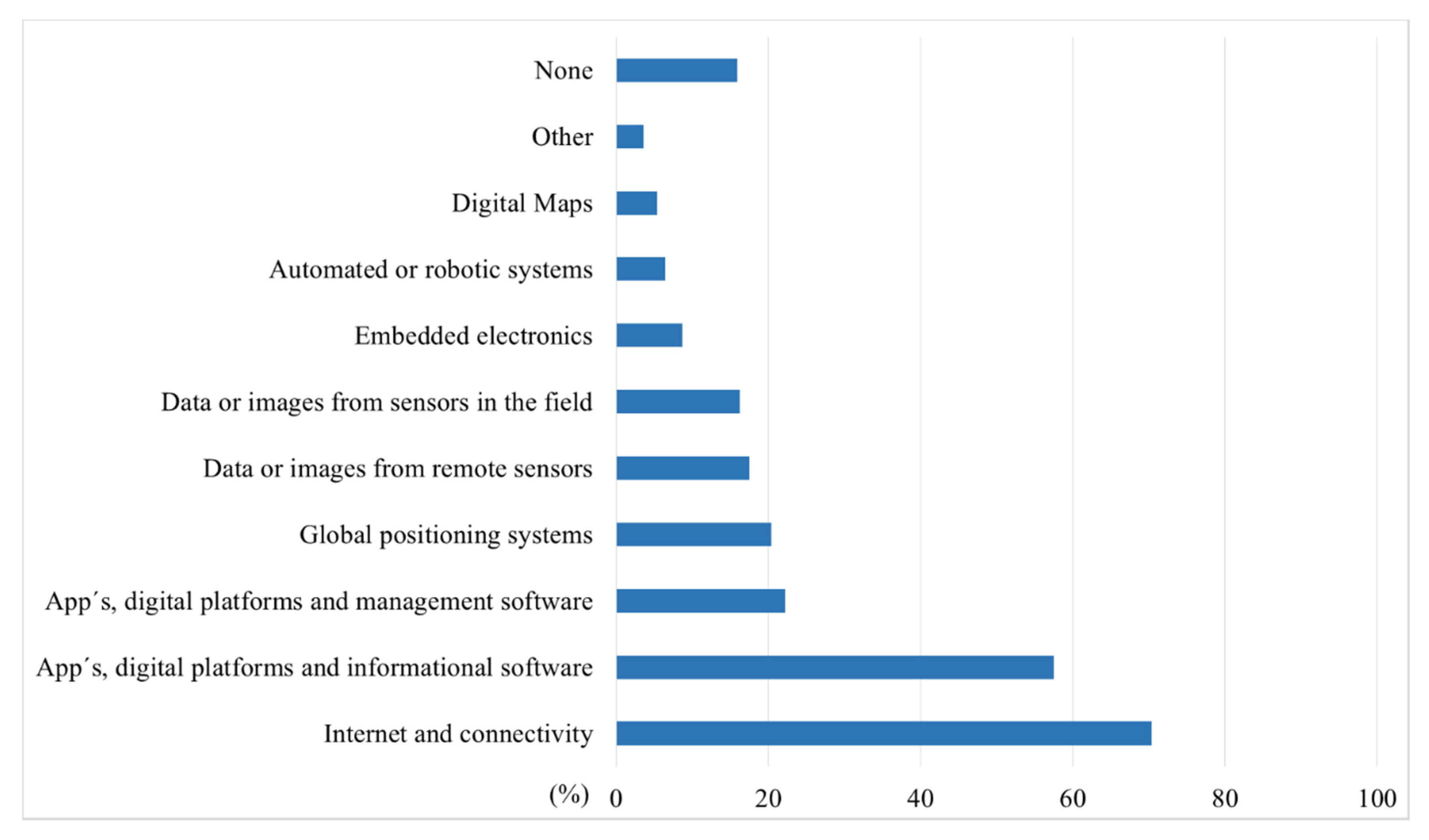 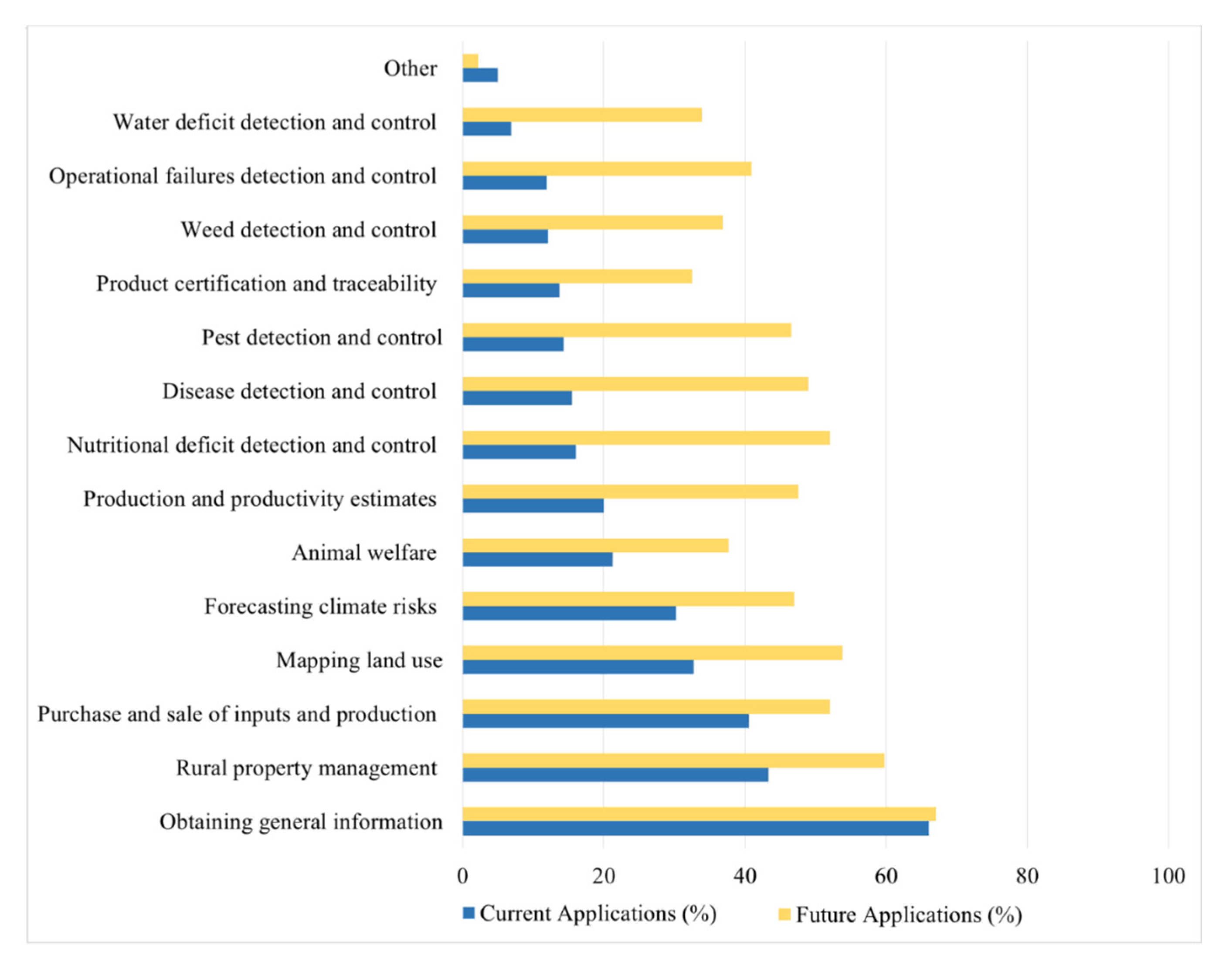 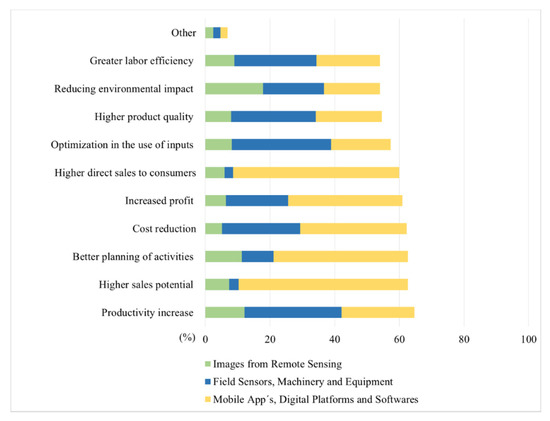 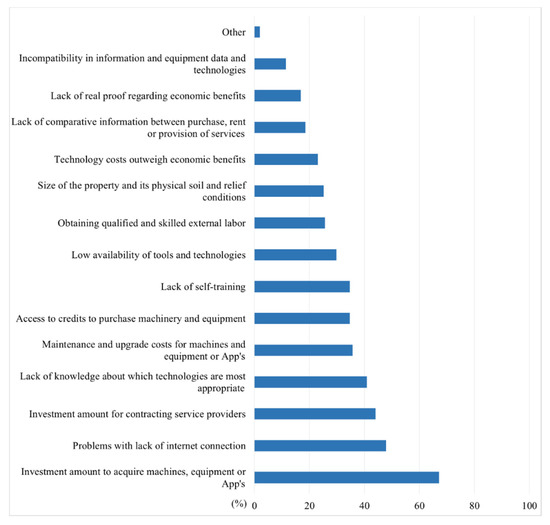 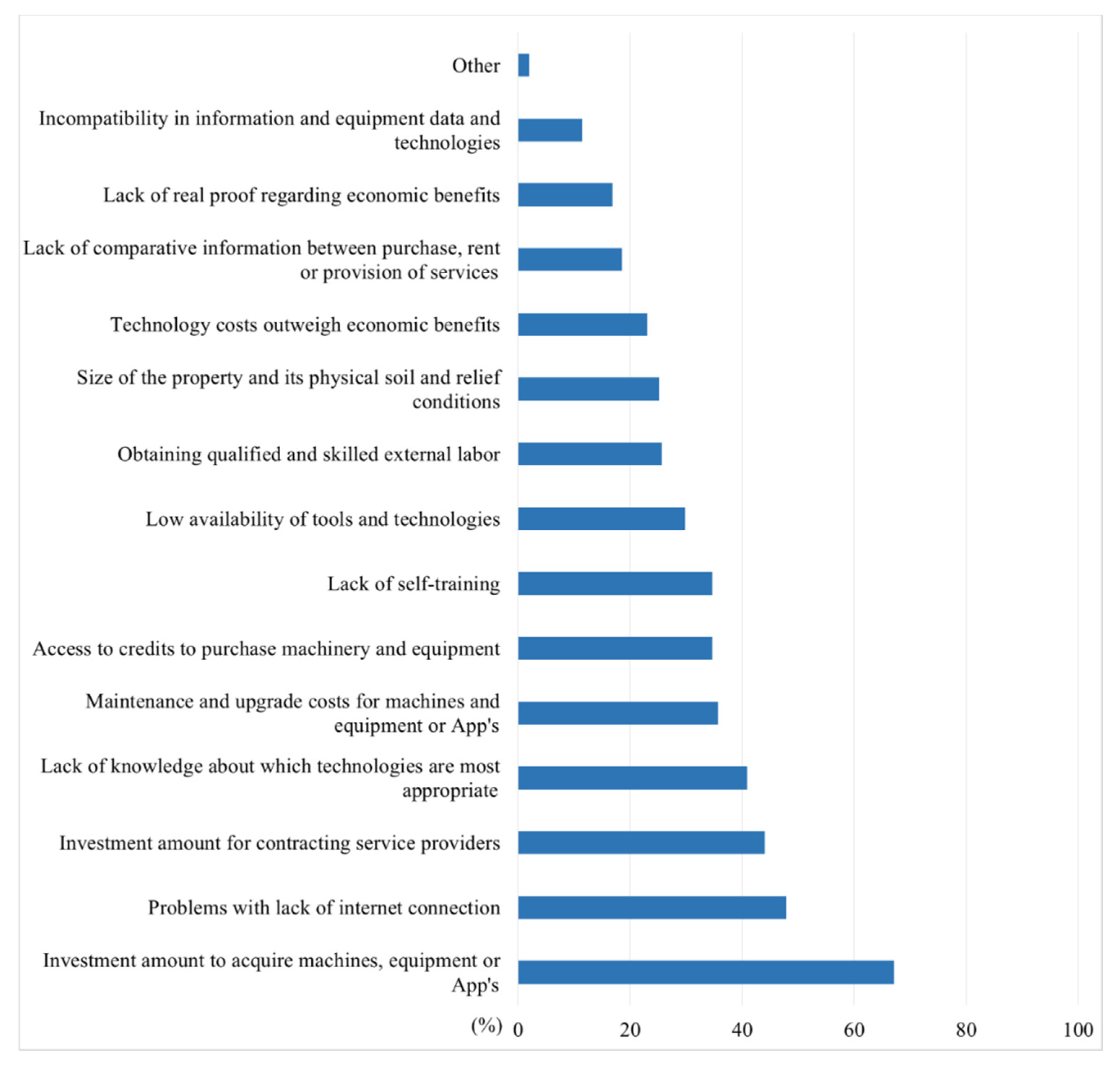