Expression of the Novel Cardiac Biomarkers sST2, GDF-15, suPAR, and H-FABP in HFpEF Patients Compared to ICM, DCM, and Controls
Next Article in Special Issue

Impact of Neoadjuvant Chemotherapy on the Outcomes of Cytoreductive Surgery and Hyperthermic Intraperitoneal Chemotherapy for Colorectal Peritoneal Metastases: A Multi-Institutional Retrospective Review

Despite recent improvements, pancreatic ductal adenocarcinoma (PDAC) remains a deadly cancer with an overall survival (OS) rate at 5 years of only 10% [1]. Even patients with localized cancers who undergo resection are still likely to experience recurrence [2]. Adjuvant chemotherapy following surgery improves OS rates [3,4,5]. However, a significant proportion of patients are unable to initiate adjuvant chemotherapy following pancreatectomy, frequently because of postoperative complications or rapid disease recurrence [6]; many more are unable to finish the planned course of adjuvant therapy [7]. Indeed, a strategy of surgery first (SF) followed by planned adjuvant therapy has not resulted in significant improvements in OS during the past several decades, even at high-volume, experienced institutions [8,9].
In contrast, the administration of chemotherapy and/or radiation therapy prior to surgery guarantees the delivery of systemic therapies. In retrospective analyses, neoadjuvant therapy (NT) has been associated with improved rates of margin-negative resection and a decreased incidence of lymph node metastases [10,11]. NT also offers several other theoretical benefits, including early treatment of presumed micro-metastatic disease, enhanced selection of patients with appropriate tumor biology for surgery, and the ability to histologically measure the response to therapy [12,13]. Evidence of improved survival has also been suggested based on data from cancer databases [10], meta-analyses of retrospective studies [14], and Markov decision models [15]. In turn, NT has become the preferred approach for borderline resectable (BR) PDAC, while guidelines support the use of either SF or NT for potentially resectable (PR) PDAC [16,17,18].
Despite the theoretical and empirical advantages of NT, its use in the United States has remained relatively low [19,20], potentially driven by the lack of level I evidence for its efficacy. Until recently, only two small randomized controlled trials (RCTs) had been performed comparing SF to NT, and both were terminated early due to poor accrual [21,22]. Previous systematic reviews and meta-analyses that have purported a survival benefit with NT included non-randomized prospective and retrospective studies, which are limited due to their inherent selection biases [14,23,24,25,26]. As several larger RCTs have recently been completed, albeit with older neoadjuvant regimens, the purpose of the current study was to perform a meta-analysis limited to only RCTs evaluating SF vs. NT for PDAC.

The meta-analysis was performed according to Preferred Reporting Items for Systematic Reviews and Meta-Analyses (PRISMA) guidelines [27,28]. A systematic review of the Pubmed, Cinahl, Medline, Embase, and CENTRAL databases was performed using the following Medical Subject Heading (MeSH) search terms: pancreatic cancer, neoadjuvant therapy, and randomized controlled trial. Multiple combinations of search terms were used. The final search was completed on 31 January 2020 and updated on 25 March 2020; the search strategy is reported in Table S1. Screening was performed using Covidence (Melbourne, Australia).
Studies including patients with PR or BR PDAC who were randomized to either SF or neoadjuvant chemotherapy and/or radiation therapy, and reported OS as a primary or secondary outcome, were included. Studies involving locally advanced (LA) PDAC were excluded. Retrospective and non-randomized prospective studies, and those without English-language abstracts, were excluded while published conference abstracts were not.
All titles, abstracts, and full texts were reviewed for inclusion according to the above criteria. Data extraction from the included studies was performed by two authors, and disagreements were resolved with discussion until consensus was achieved. Data on number of patients, resection rate, margin-negative (R0) resection rate, lymph node positivity rate, grade ≥3 complications, OS duration or hazard ratio, and type of adjuvant therapy were recorded for both treatment arms; type of NT, grade ≥3 serious adverse events (SAE) during NT, and completion rate were recorded for patients undergoing NT. All studies were assessed for risk of bias according to the Cochrane ROB-2 tool from the Cochrane Collaboration [29]. The quality of evidence for each outcome was estimated according to the Grading of Recommendations Assessment, Development and Evaluation (GRADE) process [30].

The primary outcome was OS on an intention-to-treat basis, while secondary outcomes were overall resection rate (intention-to-treat) and R0 resection rate (among patients who underwent resection). Hazard ratios (HRs) and risk ratios (RRs) were used as effect size for each respective outcome. For the primary outcome, HRs were extracted from articles in which these data were provided. In instances where HRs were not reported, HRs and 95% confidence intervals (95% CIs) were estimated using indirect methods, based on observed events, total events, log-rank or Cox proportional model p-values and published Kaplan–Meier curves [31]. For the secondary outcome, RR and 95% CI were estimated based on event rates reported in 2 × 2 table formats.
RRs and HRs (95% CI) were log-transformed, and standard errors were computed based on log-transformed confidence interval bounds. Pooled logRR and logHR were then calculated using random-effects models via the restricted maximum likelihood estimator (REML). REML is approximately unbiased and efficient [32]. Median OS was estimated for each group via the following methodology [33]: log-transformed survival times (logMST) from each study were pooled in each treatment group, using weights derived from variances resulting from both sample size in each group and study precision of HRs. The standard error of the combined logMST was then calculated as the square root of the sum of the inverse variance weights.
Sensitivity analysis based on the random-effects model was done to examine effects of setting (PR vs. BR) and NT type (chemotherapy vs. chemoradiation (CRT)) on the primary outcomes by analyzing the relevant trials. HR < 1 for OS or RR > 1 for the secondary outcomes where the 95% CI does not contain 1 would favor NT. The amount of true heterogeneity in logRR or logHR was assessed using the I2 statistic. For ease of interpretation, estimated average logRR and logHR and 95% CIs were transformed back to RR and HR scales through exponentiation and results displayed using forest plots. All meta-analyses were done using R package (metafor).

The authors thank Sarah Hyman for assistance with literature review and Guy Brock for statistical advice. 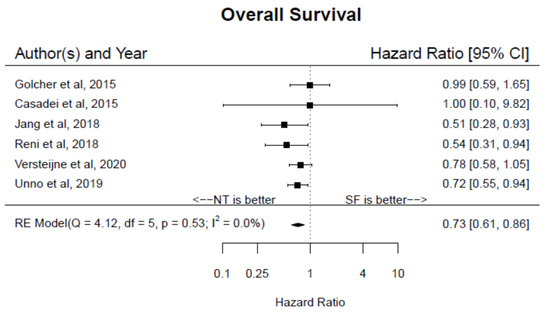