The Extent of Transmission of Novel Coronavirus in Wuhan, China, 2020

Estimating the Unreported Number of Novel Coronavirus (2019-nCoV) Cases in China in the First Half of January 2020: A Data-Driven Modelling Analysis of the Early Outbreak

Background: In December 2019, an outbreak of respiratory illness caused by a novel coronavirus (2019-nCoV) emerged in Wuhan, China and has swiftly spread to other parts of China and a number of foreign countries. The 2019-nCoV cases might have been under-reported roughly from 1 to 15 January 2020, and thus we estimated the number of unreported cases and the basic reproduction number, R0, of 2019-nCoV. Methods: We modelled the epidemic curve of 2019-nCoV cases, in mainland China from 1 December 2019 to 24 January 2020 through the exponential growth. The number of unreported cases was determined by the maximum likelihood estimation. We used the serial intervals (SI) of infection caused by two other well-known coronaviruses (CoV), Severe Acute Respiratory Syndrome (SARS) and Middle East Respiratory Syndrome (MERS) CoVs, as approximations of the unknown SI for 2019-nCoV to estimate R0. Results: We confirmed that the initial growth phase followed an exponential growth pattern. The under-reporting was likely to have resulted in 469 (95% CI: 403–540) unreported cases from 1 to 15 January 2020. The reporting rate after 17 January 2020 was likely to have increased 21-fold (95% CI: 18–25) in comparison to the situation from 1 to 17 January 2020 on average. We estimated the R0 of 2019-nCoV at 2.56 (95% CI: 2.49–2.63). Conclusion: The under-reporting was likely to have occurred during the first half of January 2020 and should be considered in future investigation. View Full-Text
Keywords: novel coronavirus; outbreak; modelling; underreporting; reproduction number; China novel coronavirus; outbreak; modelling; underreporting; reproduction number; China
►▼ Show Figures 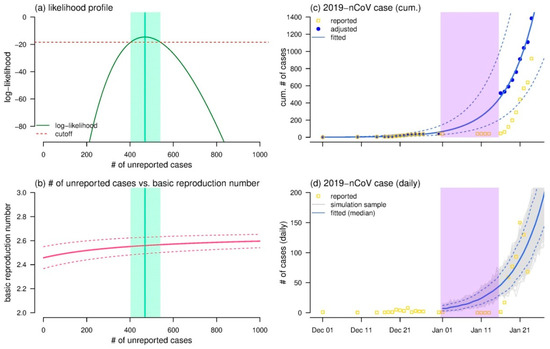