The Role of the Plasminogen Activation System in Angioedema: Novel Insights on the Pathogenesis
Previous Article in Journal

The genetic alteration underlying the great majority of primary angioedema with normal C1 inhibitor (nl-C1-INH-HAE) cases remains unknown. To search for variants associated with nl-C1-INH-HAE, we genotyped 133 unrelated nl-C1-INH-HAE patients using a custom next-generation sequencing platform targeting 55 genes possibly involved in angioedema pathogenesis. Patients already diagnosed with F12 alterations as well as those with histaminergic acquired angioedema were excluded. A variant pathogenicity curation strategy was followed, including a comparison of the results with those of genotyping 169 patients with hereditary angioedema due to C1-inhibitor deficiency (C1-INH-HAE), and only filtered-in variants were studied further. Among the examined nl-C1-INH-HAE patients, carriers of neither the ANGPT1 p.Ala119Ser nor the KNG1 p.Met379Lys variant were found, whereas the PLG p.Lys330Glu was detected in four (3%) unrelated probands (one homozygote). In total, 182 different variants were curated, 21 of which represented novel mutations. Although the frequency of variants per gene was comparable between nl-C1-INH-HAE and C1-INH-HAE, variants of the KNG1 and XPNPEP1 genes were detected only in nl-C1-INH-HAE patients (six and three, respectively). Twenty-seven filtered variants in 23 different genes were detected in nl-C1-INH-HAE more than once, whereas 69/133 nl-C1-INH-HAE patients had compound heterozygotes of filtered variants located in the same or different genes. Pedigree analysis was performed where feasible. Our results indicate the role that alterations in some genes, like KNG1, may play in disease pathogenesis, the complex trait that is possibly underlying in some cases, and the existence of hitherto unrecognized disease endotypes.
Keywords: next-generation sequencing; pedigree analysis; primary angioedema; primary angioedema with normal C1 inhibitor next-generation sequencing; pedigree analysis; primary angioedema; primary angioedema with normal C1 inhibitor

Primary angioedema is defined as localized and self-limiting edema of the subcutaneous and submucosal tissue occurring in the absence of wheals and of a causative factor. According to the criteria of the Hereditary Angioedema International Working Group [1], all hereditary forms as well as the two idiopathic forms of acquired angioedema (histaminergic and non-histaminergic) can be considered as primary angioedema. Hereditary angioedema due to C1-INH deficiency (C1-INH-HAE), the prototype of primary angioedema, is an autosomal dominant disease caused by deleterious mutations in the SERPING1 gene, leading to quantitative and/or functional C1 inhibitor (C1-INH) deficiency [2]. Normal C1-INH levels and function characterize all other forms of primary angioedema, which clinically present with individual attacks indistinguishable from C1-INH-HAE attacks, despite differing from C1-INH-HAE in many aspects [3]. Until recently, the only genetic defects known to be associated with the hereditary forms of primary angioedema with normal C1-INH levels were mutations in the F12 gene [4,5]. All other familial cases of angioedema with normal C1-INH levels were characterized as unknown angioedema. In 2019, next-generation sequencing technologies provided new insights into the genetics of primary angioedema with normal C1 inhibitor (nl-C1-INH-HAE). Two new missense mutations in ANGPT1 (c.807G>T, p.Ala119Ser) and PLG (c.988A>G, p.Lys330Glu) genes were detected in association with the disease, whereas family segregation and meticulous functional studies have proved their pathogenicity [6,7,8]. Recently, Bork et al. [9] reported a hitherto unknown variant in exon 10 of the KNG1 gene (c.1136T>A, p.Met379Lys) co-segregated with clinical symptoms of hereditary angioedema (HAE) with normal C1-INH levels in three generations of a large German family.
Interestingly, the recently discovered pathogenic variants expanded our concept of nl-C1-INH-HAE pathophysiology beyond the contact system indicating new disease endotypes [6,10,11]. Moreover, a series of patients misdiagnosed as idiopathic non-histaminergic acquired angioedema (InH-AAE) have been reported in the literature, who, after genotyping, were proved to be suffering nl-C1-INH-HAE associated with F12, PLG, or ANGPT1 mutations [12]. Thus, further uncovering the genetic basis of nl-C1-INH-HAE is expected not only to facilitate a better understanding of disease pathophysiology that could drive the discovery of new therapeutic targets but also to provide useful indicators for the clinical management of the disease. To this aim, here, we applied a custom next-generation sequencing (NGS) platform targeting a series of genes entangled in the metabolism and function of bradykinin to detect candidate genes involved in the pathogenesis of nl-C1-INH-HAE.

Patients fulfilling the diagnostic criteria of primary angioedema according to the Hereditary Angioedema International Working Group [1] and presenting with normal C1-INH plasma levels were included in the study. Beyond those diagnosed with hereditary angioedema with normal C1-INH, patients with idiopathic non-histaminergic acquired angioedema were included in this group, since they represent a temporary exclusion diagnosis that does not rule out either the appearance of angioedema in the next generation or the presence of a yet unidentified genetic background [12]. Patients already diagnosed with hereditary angioedema with normal C1-INH and factor XII mutation (FXII-HAE), as well as those with histaminergic acquired angioedema, were excluded.
In total, 133 unrelated patients (53 Hungarian, 32 Italian, 27 Spanish, 12 Greek, and 9 Polish) (35 male; age 40.8 ± 17.4 years) were enrolled in the study. Their mean (±SD) age at disease onset was 27.0 ± 16.4 years (median: 24 years). One in 133 patients had suffered only one angioedema attack during their life; the other 132/133 had a mean frequency of angioedema attacks of 7.8 per year (median: 5 per year). Of the 133 patients, 104 presented with a family history of angioedema, whereas 31/133 patients were on long-term prophylaxis with tranexamic acid. A further 169 patients with C1-INH-HAE were genotyped as controls to search for the presence of variants common in the two forms of angioedema that possibly affect the clinical expression of the disease.
The study was carried out according to the principles of good clinical practice and adhered to the ethical standards of the Declaration of Helsinki with written informed consent from all subjects. The Ethics Committee of the University of Thessaly approved the protocol of the study.

All variants detected after alignment to the hg19 genome using the VariantCaller plug-in were annotated in Ion Reporter software v.5.6 (Thermo Scientific, Waltham, MA, USA) with the gene name and for their possible presence in the Single Nucleotide Polymorphism Database (v135) [13], the Exome Aggregation Consortium (ExAC) [14], the 1000 Genomes project [15], and the ClinVar [16] according to the recommendations of the Human Genome Variation Society (HGVS) [17]. SIFT [18] and PolyPhen version 2 [19] bioinformatics tools were used for in silico pathogenicity prediction of the variants. Alignments and all obtained sequences were visually inspected using the Integrative Genomics Viewer (IGV) v.2.2 (Broad Institute, Cambridge, MA, USA).
Variants with a worldwide frequency of >1% (1000 Genomes Global Minor Allele Frequency, ExAC) and polymorphisms for which no disease associations are reported in the ClinVar database, as well as synonymous and intronic single-nucleotide variants (SNVs), were excluded from further analysis.

The following are available online at https://www.mdpi.com/2077-0383/9/11/3402/s1: Table S1: The genes analyzed by our custom NGS panel and their coverages; Table S2: The filtered-in variants detected among nl-C1-INH-HAE patients. Variants not previously reported in population databases (novel mutations) are indicated in bold.

This work was supported by an Investigator Initiated Research grant (IIR-GRC-000905) from Shire International GmbH, a member of the Takeda group of companies. 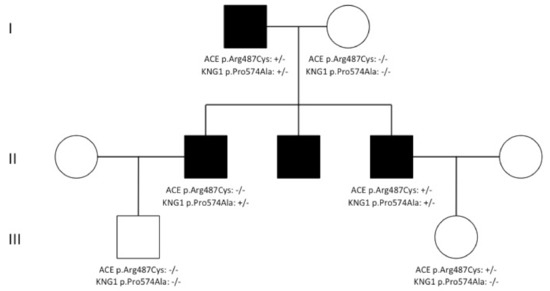 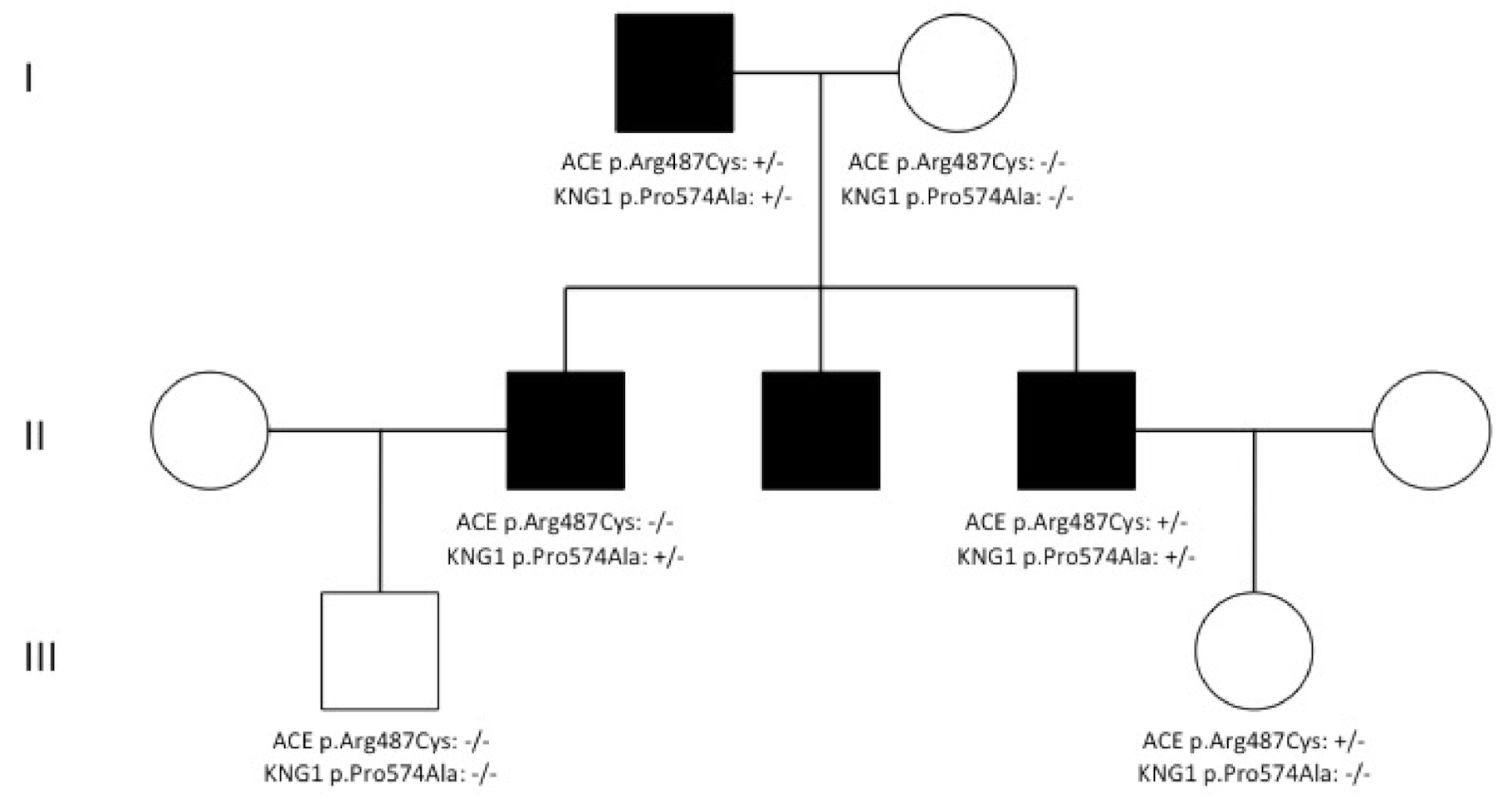