Several dietary components have been shown to influence alcohol metabolism and thereby potentially affect the development of a hangover. From the literature, it is evident that dietary nicotinic acid and zinc play a pivotal role in the oxidation of ethanol into acetaldehyde. The aim of the current study was to associate dietary intake of nicotinic acid and zinc with hangover severity. To this end, data from n = 23 healthy social drinkers who participated in a naturalistic hangover study were analyzed. n = 10 of them reported to be hangover-resistant (the control group), whereas n = 13 reported to have regular hangovers (the hangover-sensitive group). Two 24 h dietary recall records were completed, one for the day of alcohol consumption and another one for an alcohol-free control day. Dietary nutrient intake was averaged and did not significantly differ between hangover-sensitive and hangover-resistant drinkers. For the hangover-sensitive drinkers, partial correlations with overall hangover severity were computed, controlling for estimated blood alcohol concentration. A bootstrapping technique was applied to account for the relatively small sample size. The results showed that dietary intake of nicotinic acid (rPB = −0.521) and zinc (rPB = −0.341) were significantly and negatively associated (p < 0.002) with overall hangover severity. Dietary zinc intake was also significantly and negatively associated with severity of vomiting (rPB = −0.577, p < 0.002). No significant associations with hangover severity were found for other nutrients, such as fat and fibers. In conclusion, this study suggests that social drinkers who have a higher dietary intake of nicotinic acid and zinc report significantly less severe hangovers. As hangover-resistant and hangover-sensitive drinkers had a similar dietary nutrient intake, the claim of being hangover-resistant must be based on other unknown biopsychosocial factors. These findings should be replicated in a larger sample and include more elaborate food frequency questionnaires or nutrient-specific dietary intake records for zinc and nicotinic acid, and preferably accompanied by nutrient assessments in urine and/or blood.
Keywords: alcohol; hangover; nutrients; zinc; nicotinic acid; bootstrapping alcohol; hangover; nutrients; zinc; nicotinic acid; bootstrapping

A naturalistic study was conducted, including a ‘control day’ (no alcohol consumed) and a ‘hangover day’ (alcohol consumed the evening before), separated by approximately one week. Written informed consent was obtained from each participant, and The University of Groningen Psychology Ethics Committee approved the study.

n = 23 subjects participated in the study. Of them, n = 13 subjects (n = 7 men and n = 6 women) regularly have hangovers when they consume alcohol and n = 10 (n = 4 men and n = 6 women) drinkers claimed to be hangover-resistant. They were recruited by local advertisement at Utrecht University. After indicating interest, participants were contacted over the phone and underwent an initial screening. Subjects were included if they were between 18–30 years old, mentally and physically healthy, social drinkers. Recreational drug users and smokers were excluded from participation. Further exclusion criteria comprised a positive urine drug or pregnancy screen, the use of medicinal drugs (including over-the-counter pain killers), and alcohol consumption within 24 h before the start of the control test day. To maximize the likelihood that subjects would actually have a hangover during the study, subjects were included only if it was demonstrated that they consume sufficient amounts of alcohol that can produce a hangover per se. To check this, estimated blood alcohol concentration (eBAC) was calculated for the alcohol consumption they reported for ‘a regular night out’. This was done by applying a modified Widmark equation [26], taking into account gender and body weight. To be enrolled in the study, an eBAC of 0.08% or higher was required, based on hangover susceptibility likelihood calculations by Verster et al. [27] and Kruisselbrink et al. [28].

The naturalistic design was chosen to closely mimic a realistic real-life hangover experience which has relatively higher ecological validity compared with other methodologies [29]. Researchers were not present during alcohol consumption, and thus had no influence on the participants’ (drinking) behavior. Participants, therefore, dictated their own time period of drinking, types of alcoholic beverages consumed, and their activities during drinking (e.g., staying at home, going to a bar, dancing, etc.). Subjects were asked not to change their lifestyle while participating in the study. They were asked to refrain from consuming any alcohol three days prior to the control day. Both test days started at 9 a.m. Subjects completed a 24 h dietary recall diary [30] and the presence and severity of hangover symptoms were assessed. A urine drug screen (Instant-View, determining the presence of amphetamines, barbiturates, cannabinoids, benzodiazepines, cocaine, and opiates) was conducted according to the manufacturer’s instructions (Alfa Scientific Designs, Inc., Poway, CA, USA).

The participants were asked to complete a 24-h dietary recall diary [31]. This assessed the 24 h dietary intake before both test days. Participants wrote down the amount and type of food as precisely as possible. Subjects were asked to record all food and beverages consumed for breakfast, lunch, dinner, and ‘in-between’ during the past 24 h. They were instructed to write down the time of consumption and the amount consumed (i.e., an estimate of the portion size). Examples were provided on how to complete the diary. Participants were urged not to forget smaller, ‘less significant’ food items, such as pieces of candy and to include details such as whether or not they buttered any bread consumed. Nutrient calculations were performed using the ‘eetmeter’ (‘eating meter’ in English) [32], developed by the ’Voedingscentrum’ of ‘Rijksinstituut voor Volksgezondheid en Milieu’ (RIVM). The assessments take into account quantities, frequency, and portion sizes of consumed food and beverages. Nutrients obtained from alcoholic and non-alcoholic beverages, consumed during the drinking session, were included in the calculation models. The ‘eetmeter’ provided data on nutrient intake of nicotinic acid, zinc, total fat (triglycerides, esters derived from glycerol and fatty acids, and fatty constituents such as phosphatides and sterols), saturated fat (total of saturated fatty acids), carbohydrates (total of mono- and disaccharides, starch, dextrin, and glycogen), proteins, fibers, water, sugar, vitamin A (retinol), vitamin B1 (thiamine), vitamin B2 (riboflavin), vitamin B6 (pyridoxine, including pyridoxal and pyridoxamine), vitamin B11 (folic acid), vitamin B12 (cobalamins), vitamin C (ascorbic acid, including L-ascorbic acid and L-dehydro-ascorbic acid), vitamin D (cholecalciferol and 25-hydroxy vitamin D), vitamin E, salt, sodium, potassium, calcium, magnesium, iron, selenium, iodine, and phosphorus [33]. Dietary intake was computed for the alcohol and the control day. The average dietary intake of the two days was computed to better represent daily dietary nutrient intake.

Statistical analyses were conducted with SPSS, version 25 (Armonk, IBM Corp, New York, NY, USA). Mean and standard deviation (SD) were computed for each variable. Hangover-sensitive drinkers were included in the analysis if they had an overall hangover score of 2 or higher. Hangover-resistant drinkers were included in the analysis is they had an overall hangover score of 0 or 1. Firstly, nutrient intake was computed separately for the alcohol test day and alcohol-free control day respectively. These were combined into a two-day average score to better reflect regular nutrient intake. Secondly, dietary nutrient intake of hangover-sensitive and hangover-resistant drinkers was compared. Third, dietary nutrient intake of hangover-sensitive drinkers was correlated with overall hangover severity, by computing partial correlations (rP), controlling for eBAC. This approach controlled for the different alcohol consumption levels between participants. Thirdly, nutrient intake levels that correlated significantly with overall hangover severity were further correlated with the 23 individual hangover severity measures, again by computing rP, controlling for eBAC.
To further examine the data and account for the relatively small sample size, a bootstrapping analysis [34,35] was conducted to simulate the population distributions of the partial correlations (rP). Bootstrapping and interpretation of its results are summarized in Figure 2. In bootstrapping, data from the original sample (Figure 2A) are used to generate B new datasets (Figure 2B). The new samples have the same sample size as the original sample. The new samples are constructed by randomly drawing cases (resampling), with replacement, from the original sample. In the current analysis, B = 10.000 samples (of n = 13 subjects each) were created (Figure 2C), a recommended resampling size for bootstrapped CI estimation [36]. For each of the bootstrap samples a new rP is then computed (the bootstrapped partial correlation, denoted as rPB). Composing a histogram of all rPB (Figure 2D) results in a histogram with a normal distribution that usually mimics the population distribution [36]. Subsequently, it can then be calculated how much the rPB’s vary across the bootstrap samples (Standard Error, SE). The reported ‘Bias’ measure represents the deviation of the overall rPB from the rP that was obtained from the original sample [37]. To compute the corresponding bootstrapped confidence interval (CIB), a Bias Corrected and accelerated (BCa) correction was applied [38]. This correction was applied to adjust for the observed Bias, and to account for potential skewness of the bootstrap distribution (operationalized as SE). In the case of (partial) correlations, CIB’s can range from −1 to +1. Narrow CIB’s imply greater precision, and if the CIB does not include zero, the rPB is considered statistically significant (Figure 2E). Usually, 95% CIB’s are computed (corresponding to a significance level of α = 5%). However, to correct for the multiple comparisons in the current study, a 99.8% CIB was computed (corresponding to a significance level of p < 0.002).

In conclusion, this study suggests that social drinkers who have a higher dietary intake of nicotinic acid and zinc report significantly less severe hangovers. 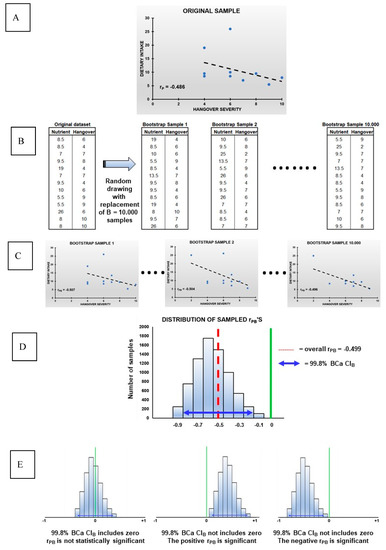 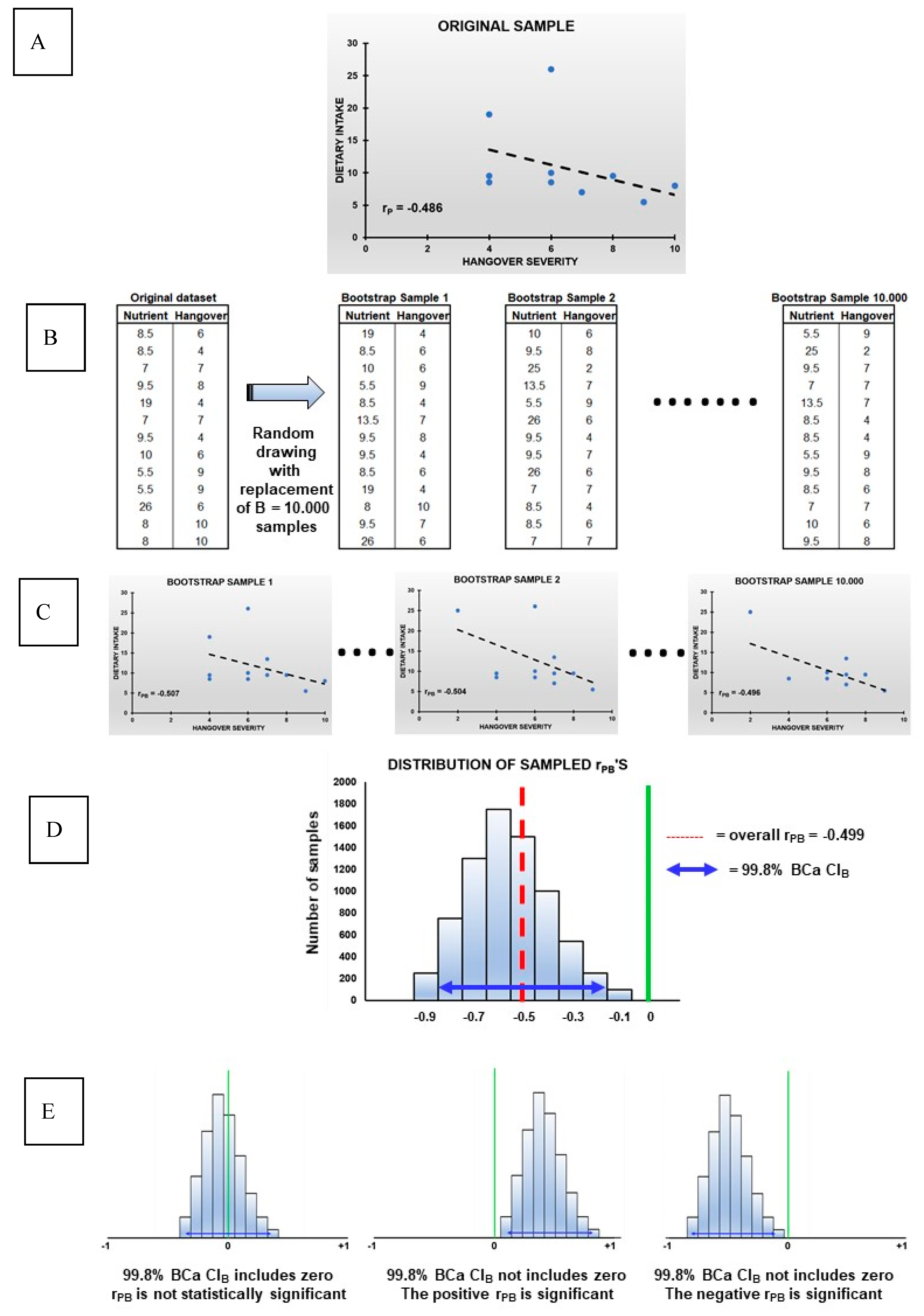 Table 4. Association between dietary zinc intake (two-day average) and hangover symptom severity.
Table 4. Association between dietary zinc intake (two-day average) and hangover symptom severity.
Reported rP and p-value are from the original partial correlation, controlling for eBAC. Bootstrapping was conducted with B = 10.000 samples. A 99.8% CIB (corresponding to p < 0.002) was used to correct for multiple comparisons. The rPB’s are significant if the BCa 99.8% CIB does not contain zero, indicated by *. Abbreviations: rP = partial correlation, eBAC = estimated blood alcohol concentration, SE = standard error, BCa = bias-corrected and accelerated, CIB = bootstrapped confidence interval.
© 2019 by the authors. Licensee MDPI, Basel, Switzerland. This article is an open access article distributed under the terms and conditions of the Creative Commons Attribution (CC BY) license (http://creativecommons.org/licenses/by/4.0/).
We use cookies on our website to ensure you get the best experience. Read more about our cookies here.
Accept
We have just recently launched a new version of our website. Help us to further improve by taking part in this short 5 minute survey here. here.
Never show this again